You don’t need to take a twirling stroll across an alpine meadow this summer to enjoy some fine tunes in the great outdoors. That’s because the flatlands of Richmond are well and truly alive with the sound of music.
Jul 5, 2014 12:44 PM By: Richmond News 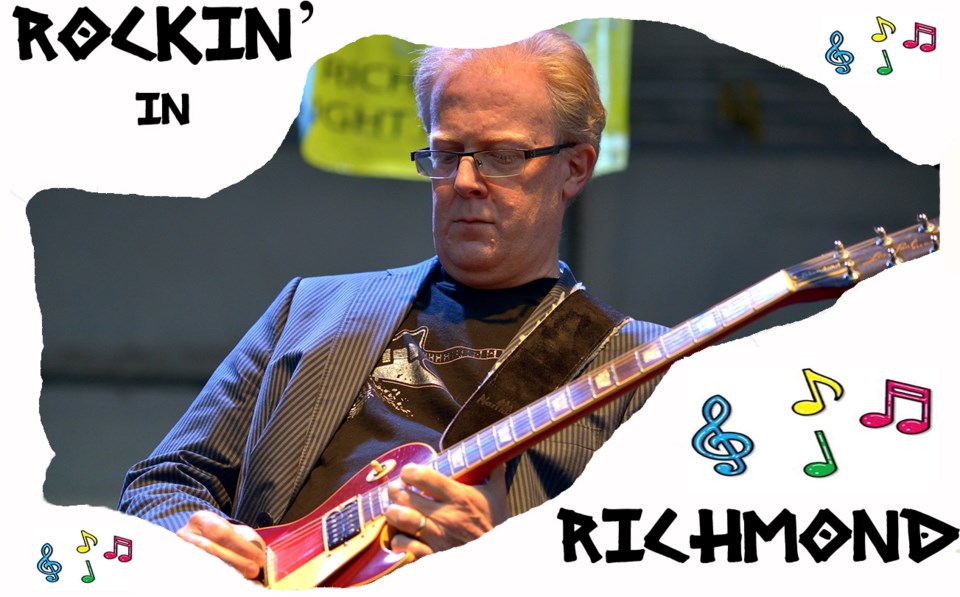 You don’t need to take a twirling stroll across an alpine meadow this summer to enjoy some fine tunes in the great outdoors.

That’s because the flatlands of Richmond are well and truly alive with the sound of music.

In fact, when it comes to a plethora of local, live music gigs, Richmond rocks.

With the expectation of some great weather in July and August organizers have put together playlists to delight audiences with all manner of musical stylings dotting the calendar in local parks, plazas and the two, bustling night markets.

One of the more established events is held at the Gulf of Georgia Cannery National Historic Site in Steveston (western foot of Moncton Street) where the Music at the Cannery series opens tonight (July 4) with local children’s entertainer Charlotte Diamond who will be playing with her son Matt (see accompanying story on the next page). The series runs rain or shine each Friday evening until Aug. 27 when Harpdog Brown & Jordan Edmonds take to the stage.

The idea to host an outdoor concert at the cannery sprouted in the mind of Frankie Neilson seven years ago. Neilson, who runs The Beat Merchant Record Store, said when he decided to open his shop in the historic fishing village he discovered  there was a lack of live music locally.

“And I kinda looked around for some ideas and saw that the cannery had this open space next to the main building that wasn’t in use. So, I thought it would be a superb venue for an open air festival,” he said. “So, I chatted with the folks at the cannery and they were up for it.”

Neilson said the cannery’s wooden deck, which is surrounded on three sides by wooden buildings, makes for good acoustics and can hold up to 160 people.

“It’s usually packed out each time,” Neilson said. “We’re into the seventh year and everyone looks forward to it. It’s become a bit of a tradition. Plus, I thought it would be a nice thing to do for the community.”

It’s also been somewhat of a springboard for some performers.

“We had Harpoonist & the Axe Murderer play twice at the cannery very early on in their career. And now they’ve got their third CD out and they are on a major tour this summer,” Neilson said. “That’s the great thing about these types of shows. They can give new artists a chance.”

And that’s vital in today’s music business where technology has provided the opportunity for wide exposure to the digital masses, but often few chances at the traditional live gig, said Neilson who at just 17 was a recording engineer at the Marquee Studios in Soho, London’s red light district, before joining Elton John’s record label DJM as assistant A&R Manager (Artist and Repertoire) for four years in 1974 and was responsible for searching for new artists and bands.

“There’s nothing that beats the thrill of playing live and having a rapport with the audience,” Neilson said. “The music industry is not how it used to be with the technology today,” Neilson said. “So, if you can lend somebody a hand and help them along the way, then that’s a good thing, right?

The response to the cannery’s series from live music lovers has been so good over the years that Neilson said he has been trying to carry over the sweet sounds to the winter months, but has not found an appropriate venue.

“We tried some shows inside the cannery when the (2010) Winter Olympics were on,” Neilson said. “The problem though was that it was so cold it’s hard to keep the instruments in tune.

“We had a trumpet player who was constantly tuning, even with the heating on. It would take a fair bit of renovation to bring that site up to a good standard for a concert, which is a shame, because it’s such a great venue. It has that history in every piece of wood there.”

Reviving that historical link between the cannery – built in 1894 — and live music is  a wonderful offshoot, said Karen Lee, public programs manager with the cannery.

“Over the years there were plenty of cannery dances where the workers would unwind from their jobs,” Lee said, adding the chance to expose the cannery to more people through the concert series is a benefit.

“We wanted to make the cannery more accessible and also have people experience the outside of the buildings,” Lee said.

For Neilson, the music is the prime concern and he sponsors the series and helps book the talent taking the stage.

“Because I run a record store you get people talking about music and what they’ve heard locally. So, I am always writing names down in my little blue book throughout the year,” said Neilson, adding he also taps into his connections in the business to seek out new performers. “It’s a fair amount of work over the two months, and I really get going in February and March.”

Having Diamond open the cannery series is an inspired choice, one that was a few years in the making, Neilson said.

“I always thought I should try and get her for the summer. But with one thing or another we’ve kind of missed,” he said. “It’s a nice way to start off a series with someone who is well known, local and has this background of playing with Pete Seger and a folk background we want to try and gear more towards the show than just her children’s music.”

Other Steveston-based outdoor music events during the summer include Britannia Shipyards, National Historic Site (5180 Westwater Drive) where Petunia and the Vipers perform music ranging from rockabilly to western swing on July 17,  while unique Indo-folk music by Ranj Singh is set for Aug. 21. Both shows start at 7 p.m.

And over at Steveston Park (4011 Moncton Street) on July 17 and Aug. 21 is Steveston’s Summer Fun Commnity BBQ/Concert in the Park. The event runs from 5-7 p.m.

Tunes in the park

Suzi Rosenberg, recreation leader with the City Centre Community Association said the event debuted in 2003 as a city-wide initiative with a single concert that has grown to a full-fledge music series today. Since 2011 it has been drawing plenty of families on a weekly basis through the summer from the area neighbourhood to the open cozy, amphitheatre which has stepped seating so visitors can get a good view of the performances.

“We get around 100 or so people coming down for an evening,” Rosenberg said, adding the focus is on giving local talent a venue to perform.

“Plus, we make sure there is something for everyone who attends and that includes visit by the city’s Art Truck which brings along arts, crafts and face painting for the kids,” Rosenberg said.

On July 9 Drum Syndicate, a world percussion group, kicks off the series. Admission is free.

If it’s music showcased with a lot of flash and glitter, Richmond’s two summer night market locations are the place for you.

At the International Summer Night Market, located on a 10-acre site at 12631 Vulcan Way (behind Home Depot on Sweden Way), organizers said there is a great variety of acts taking the stage on the Friday to Sunday market nights, ranging from hip-hop and rock bands to classical Chinese and pop music.

It’s an effort to try and reach out to as many groups and cultures as possible, organizers said.

On July 4 local singer-songwriter Anna Toth — who has recorded with local talent including: Gentleman's Vibe and Matt Dennison from the hit youtube comedy channel IFHT and collaborated with members from the Juno award winning band- The Strumbellas — is scheduled to perform from 9:30 to 10:15 p.m.

With three market nights a week and entertainment to include some national night celebrations for a number of countries, the list of live music entertainers is constantly being updated. Visit the night market’s website (summernightmarket.com) and click on the calendar for the most current information.

The International Summer Night Market charges a $2 entry fee for adults. Children 12 years and under, as well as seniors 60 and over, are free.

Over at the Richmond Night Market — located at 8351 River Road, beside the River Rock Casino and Resort — the stage presents a great opportunity for up and coming performers to get experience playing in front of a sizeable crowd.

“We get interest from people from all over Vancouver wanting to come out and perform,” said Jessica Cheng, an administrative assistant with the Richmond Night Market. “And depending on how much experience they have, they get anywhere from 15 minutes to an hour of time on the stage.”

Many of the acts are those that have sent in videos of their performances for night market staff to review.

Each night there can be as many as four different performances covering a wide variety of styles.

While the music is free, admission to the Richmond Night Market is $2.25. Children under 10 and seniors 60 and over are admitted free.

Providing an outdoor venue to play some favourites from a bygone era is the Minoru Place Activity Centre which hosts the Concert in the Plaza on two evenings (July 21 and Aug. 6) this summer around the fountain in the courtyard outside the Richmond Cultural Centre.

Sonja Pickering, recreation facility clerk at Minoru Place Activity Centre said the events have been held there for more than a decade and draw mixed ages to hear great tunes.

“It’s a wonderful setting that provides an opportunity for different generations to come out and interact,” Pickering said.

Music drifting through the air on a warm summer evening is a great way of showcasing what Richmond has to offer not only locals, but visitors, as well, said Tracy Lakeman, CEO of Tourism Richmond.

“It helps make the city more vibrant for visitors,” Lakeman said. “It gives them that added flavour of not only our music scene and talent in Richmond, it also gives them more to do. And we’re always looking for opportunities for the visitors to explore the cultural side of our community and spend more time here. And music is such a great vehicle for entertainment.”

Plus, it’s a good way to showcase the beautiful venues the outdoor concerts use locally, Lakeman added.

“They (settings) are all very unique. You look at the music at the cannery. It’s a beautiful location. And then you get to highlight cannery,” she said. “Britannia Shipyards — just look a the backdrop. And the night markets, they are so vibrant already.”

July 18 - The Jessica Stewart Few - One of Canadian's up and coming indie acts.

July 25 - A Couple of Hooligans featuring Dave Hoerl and Dave Webb - enjoy an evening of blues.

July 17: The Petunia and the Vipers

Concert in the Plaza

Concert in the Park

Concert in the Plaza

Concert in the Park