You have to be obsessive to do well: Richmond's giant pumpkin grower

David Chan grew his latest gourd from a seedling in his kitchen in April
Oct 9, 2015 3:00 PM By: Alan Campbell 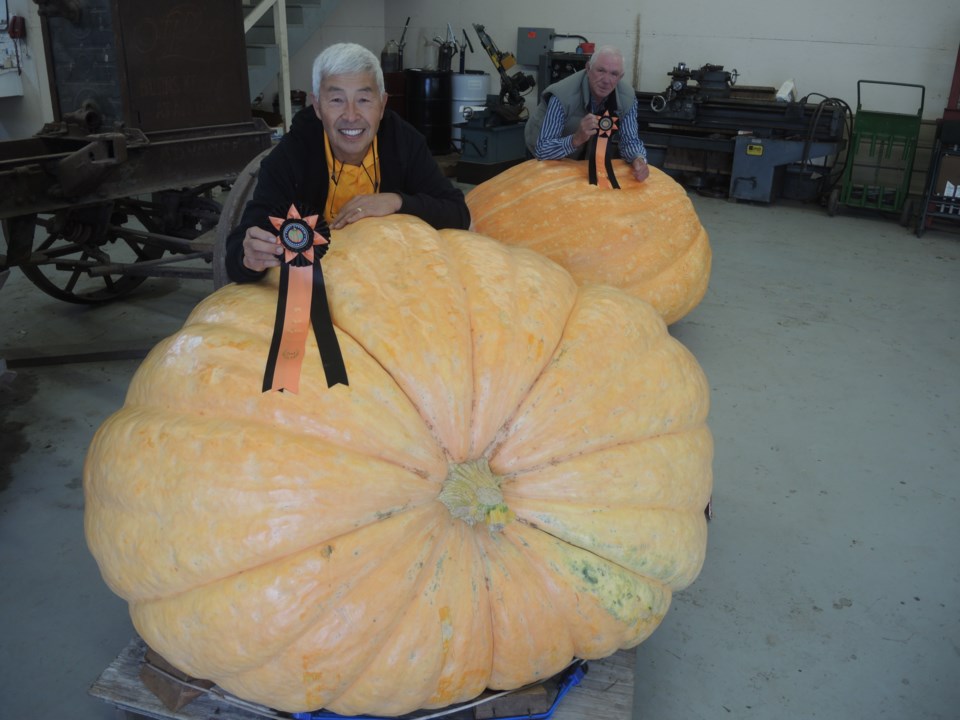 Growers of the Atlantic giant pumpkin David Chan, foreground, and Jim Savage show off their season’s best at 1,339 pounds and around 900 pounds, respectively.Alan Campbell/Richmond News

It’s more than eight times his body weight and his wife has no problem with him “obsessing” over it.

Suffice to say, David Chan’s passion for pumpkins has grown beyond a hobby and into a giant-sized daily routine.

From the moment Chan plants his seedlings in little pots all around the kitchen of his home on Fedoruk Road in east Richmond in April, his life changes markedly.

Every single day, between then and hauling his giant pumpkins out of the ground in October, Chan nurtures and cares for his creations for at least one hour a day, sometimes six.

“It starts from a seed in April in the kitchen and then goes into the ground in May,” enthused Chan, who’s been growing the Atlantic giant variety for seven years on his 2,000 square-foot plot.

“Mine went into the ground May 3 and came out Oct. 1. It was fed weak fertilizer every day for constant growth, a little bit of water and then pruning every other day.

“It takes a lot of care and is a true hobby. But you have to adjust your levels of care depending on what you see growing.

“I will spend at least an hour every day, some days it could be six or seven if there’s lots of pruning to be done and then there’s the setting up of the irrigation system and then mixing the fertilizers.”

Chan’s prize pumpkin this season weighed in last week at a whopping 1,339 pounds at a competition in Langley — but could only finish second, to a 1,411-pound beast.

“I went there to get weighed for a world-wide competition,” explained Chan, who has a smaller, second giant pumpkin, weighing around 1,000 pounds, that he’s taking to a competition near Seattle on Saturday, where cash prizes reach $1,000.

“The guy that won in Langley said he has another bigger than the one he just won with!” laughed Chan.

“So I’m going down purely for the competition and maybe grab a top-10 finish.”

Chan said growers are only allowed to weigh-in the pumpkin at one competition, to avoid the same monster sweeping every event during the season.

He did, however, win a local event two years ago with a 1,043-pound entry and could only muster a 1,040-pound gourd last year.

And he’s helped neighbouring farmer Jim Savage get into the giant pumpkin pastime, with Savage growing a 900-pound effort — good enough for a fifth-place ribbon — from a Chan seedling this season.

But with the world record standing at 2,323 pounds, Chan knows he’s got a lot of work to do to attract global fame.

“There’s a lot of plant science and soil science combined. You must do your homework for it to work,” said Chan, who uses a store brew of fertilizer before adding his own micronutrients.

“I only got two this year; one cracked, I think because it was growing too fast. Nobody really knows, maybe not enough water, maybe too much?”

As for how his wife really feels about his passion for all things pumpkin, Chan said she’s totally fine with it.

“It’s a little bit obsessive; but anybody who isn’t, won’t do well,” said Chan, while wearing a pumpkin-coloured golf shirt as his wife laughed knowingly in the background.

“She’s very supportive. She lets me occupy the kitchen for the whole of April, as I’m often growing seedlings for other people.”