Claire Roque needs to work on her sugar skills. Unfortunately, the closest sugar experts are in Seattle and Los Angeles, and the pastry chef she would really like to learn from is based in Belfort, France.
Jun 14, 2019 9:00 AM By: Maria Rantanen 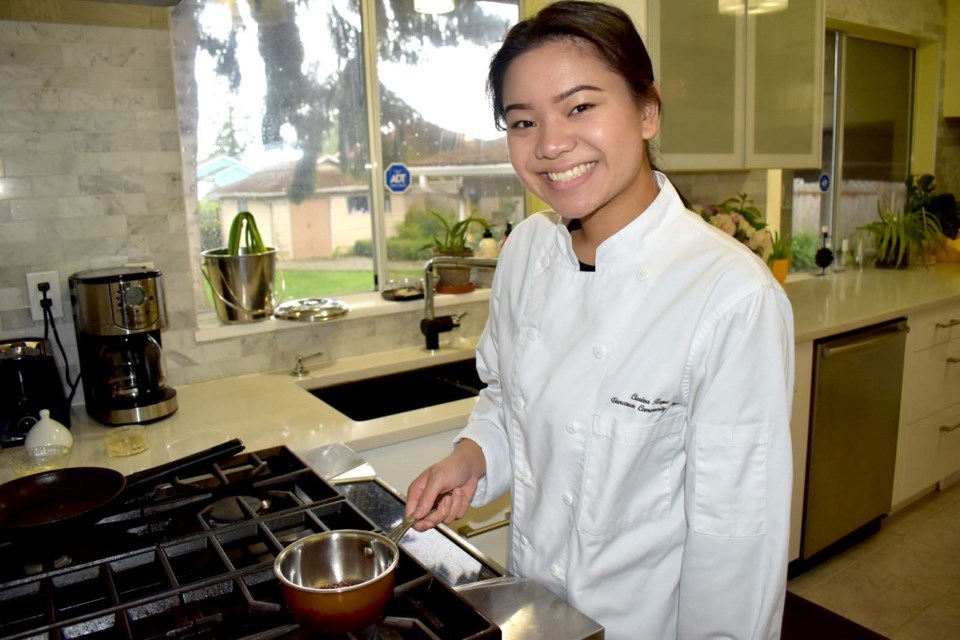 Claire Roque competed at a national post-secondary baking competition a few weeks ago. Now, she heads to the world competition in Russia.Maria Rantanen

Claire Roque needs to work on her sugar skills. Unfortunately, the closest sugar experts are in Seattle and Los Angeles, and the pastry chef she would really like to learn from is based in Belfort, France.

Roque, 19, has about two months to perfect her sugar skills before she needs to make a sugar piece extraordinaire at the World Skills bakery competition in Kazan, Russia.

The Richmond resident is fresh off a national win in Halifax, N.S., where she went head-to-head with another Canadian baker-in-training at the Skills Canada national competition. She created six items over two days and eventually beat her competitor for a spot to the world championship.

The recent post-secondary national competition gave her a good taste of what it will be like competing internationally. For the national competition, Roque trained five days a week, up to 10 hours a day, for three months with her Vancouver Community College instructor, Wolfgang Dauke, perfecting her timing and technique.

Roque said she was running on adrenalin, rarely taking breaks, eating while working.

“When you don’t think about it, you’re fine,” she said.

On the first day of the national competition, Roque had to make two identical marzipan figurines — she had practised animals, fruit and a clown during her training. The day before, though, she found out she had to make two teddy bears. She had brought along some fondant, the thick layer used typically on wedding cakes, and practised making one that night in her hotel room.

She also had to make eight petit fours - small bite-sized cakes — and four plated desserts. For the latter, she made a platter with rose peach semi-freddo, a pistachio buttermilk sponge, peach raspberry coulis and chocolate soil.

On the second day, Roque had to make a 10 moulded bonbons, two entremets and a chocolate statue. The theme at the Halifax baking competition was street art and graffiti, and Roque’s baking had splashes of (fake) spray paint and tagging.

Roque had run through the two-day competitions about seven times. She was more nervous leading up to the competition, but once she got there she calmed down.

“I felt more confident than I expected,” she said. While creating her pieces, she was just a couple feet away from crowds who were watching. Roque just kept telling herself to keep her head down and not slow down. But baking in front of the crowd, despite some people asking for free samples, kept her on task.

“If I know people are watching, it forces me to be aware of everything I’m doing,” she said. She also knew the culinary competitors were close by watching as well.

Roque felt both she and her competitor from Toronto were fairly evenly matched and she didn’t know whether she would win.

The theme for the world championships is Formula One Grand Prix Racing, but the pastries they are expected to make still smack of “old-school techniques.” She will have to make 20 hand-piped and hand-dipped chocolates, two marzipan figurines, a two-tiered buttercream cake, petit fours, a plated dessert and the final item: the sugar piece.

“They’re going to throw curve balls at us,” she said about the upcoming competition. “Each task has a mystery element.” That might be a surprise ingredient they have to use or a special piece of equipment.

There will be 24 competitors from around the world, but Roque knows she is facing youth who have been training to be pastry chefs since the age of 15. Roque didn’t start full-time training until her Grade 12 year, studying part-time at Eric Hamber secondary in Vancouver while doing her Youth Train in Trades program at Vancouver Community College.

After graduation, she has completed her second Industry Training Authority (ITA) training level and has been working full-time. She has now cut back on her hours at her job at Chez Christoph in Burnaby while training for competitions.

The next two months will be intense training – especially focusing on her sugar skills – in preparation for the Aug. 22-27 in Russia.

Historic slipways at Britannia Shipyards in Richmond to be restored
Mar 2, 2021 2:00 PM

Richmond PPE manufacturer feels left in the lurch after stepping up for government at start of pandemic
Mar 2, 2021 1:30 PM