'Just go for it': Advice for getting back in the saddle

Carlie Holland started horseback riding again after three years off due to an injury.
Dec 16, 2018 9:00 AM By: Megan Devlin 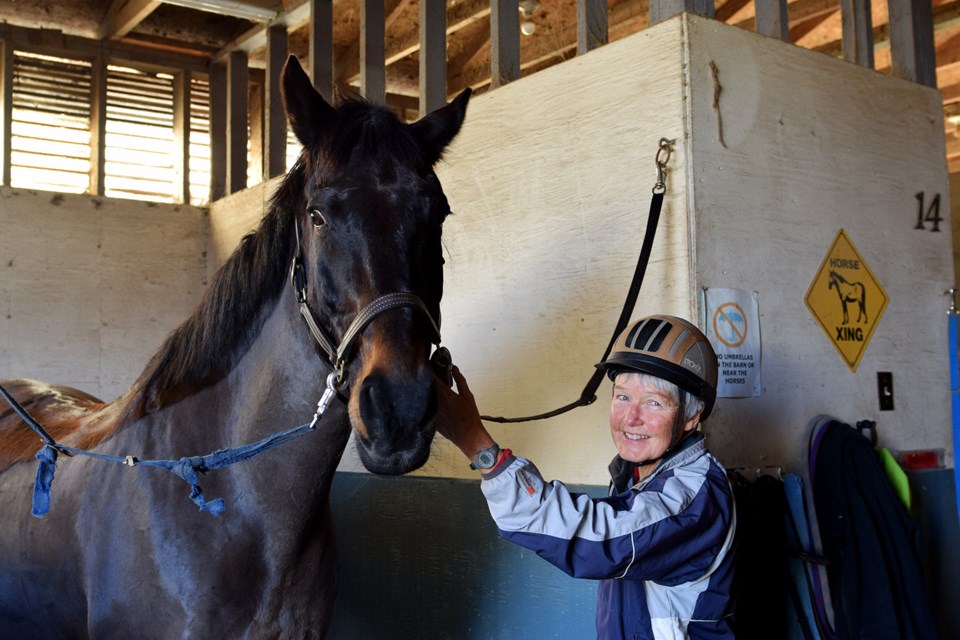 As Carlie Holland removed her horse’s saddle and bridle Monday afternoon, she took extra time to scratch his forehead and let him nuzzle her shoulder as she fastened his blanket.

It was the 60-year-old Steveston resident’s first time back in the saddle after a three-year hiatus following a horse-related accident that left both her arms broken.

“I can’t stop smiling,” she said as she led her mount, Rhys, a large dark gelding, out into his paddock.

“I just realized there was something major missing in my life,” she said. “I tried all sorts of other activities … Pilates, all kinds of classes. And nothing was really quite satisfying me.”

She realized what was missing was horseback riding, the sport she’d been doing a couple of times a week since she was a young teen in Zimbabwe.

“There's just something that horses give that you don't get anywhere else,” she said.

She decided to rekindle her love with the sport after reading News reporter Alan Campbell’s weekly Horsing Around columns. In a bid to strike learning to ride a horse off his bucket list, he’s been taking lessons at Richmond’s Blue Meadow Farm and writing about the experience.

“(They) really got me interested. And I thought, you know, I really have to get back,” Holland said.

So, she booked some lessons.

Because Holland has a bone condition, she’s decided she’s going to take “calculated risks” on her return. For example, she’s given up jumping.

Although she was anxious to start riding again after being away for so long, she couldn’t be happier with her decision.

“If there's something you have a passion for, just go for it. And see how it goes.”