Gettin' Ziggy with it to conquer cancer

Richmond dental specialist plots new 'root' to fundraising for oral cancer as part of the Ride to Conquer Cancer
May 6, 2016 11:03 AM By: Alan Campbell 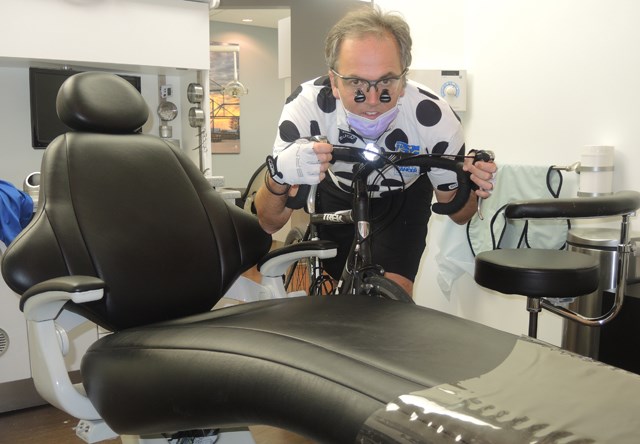 Sporting a gold cycling helmet with flame red hair popping through the vents, a lightning bolt flashing across his face, a polka dot jersey and tight, pinstriped trousers, there’s every chance Richmond's Joel Fransen will stick out from the crowd.

But it’s all part of the plan for Richmond endodontist Fransen to get as much attention as possible, whether that be during the Ride to Conquer Cancer at the end of August, or right now, during his 30-minute commute by bike from his Seafair home to his root canal practice in Ironwood.

During the 200-kilometre bike ride from Vancouver to Seattle, Fransen, 46, will have the double honour of donning a gold helmet (because this is his fifth year taking part) and wearing a polka dot cycling jersey (because he was the first to raise $15,000 this year).

The rest of his garb, however, — including the flaming hair, lightning bolt and tight trousers — is all down to his love of the late David Bowie’s alter-ego, Ziggy Stardust, who’s the inspiration behind Fransen’s attention-seeking cycle to Seattle.

“As I was raising money this year, Bowie passed away, very privately, from cancer. I thought it would capture people’s imagination and I grew up listening to Bowie,” said Fransen, who earlier this year pledged to transform into Bowie’s character if people helped him raise $7,000 for his cycling team’s chosen cause of oral cancer research.

“I think, with people such as Bowie, we have this idea that they will live forever. And I was a David Bowie fan, for sure.

“I’m not sure how I’m going to make the Ziggy outfit and the gold helmet work, but I’ll give it a try.”

Earlier this year, one of Fransen’s patients mentioned, by chance, that she makes costumes; so she’s going to put a Ziggy outfit together for the dental specialist.

As for the lightning bolt across his face — a Ziggy make-up trademark — Fransen is going to have to hang fire until the second of the two-day charity ride.

“I realized that might be an issue when crossing the border,” he said.

“But I will have bright red hair and pinstriped trousers. I will do the make-up on the second day, once we’re over the border.”

Fransen managed to raise an impressive $22,000 last year, spurred, in no small measure, by the loss in January 2015 of a colleague from his profession, Michelle Williams.

Williams, an oral pathologist, was the former captain of his ride team ­— Better Outcomes 2 ­— and, like Bowie, fought cancer very discreetly, with very few people knowing what was going on in her life.

“She was extremely private and no-one knew she was suffering from cancer. She didn’t do the ride in 2014 due to, what she called, ‘medical issues.’ None of us knew why.”

It’s not the only time Fransen, who grew up in Richmond, has experienced cancer at close quarters — having twice dealt with it, unexpectedly, through patients.

“We’ve had a couple of patients that we discovered had cancer,” he said.

“It sometimes looks like an infection, but cancer can sometimes mimic infections. One woman had cervical cancer. She didn’t survive, unfortunately.

“A 21-year-old guy who was in for a root canal on a pre-molar; but an infection kept coming back after the root canal and something didn’t add up.

“So we did a biopsy and it turned out to be salivary gland cancer, which, if you’re going to get cancer, is one of the easier ones to treat. He’s doing OK, I believe.”

And delving even further back into Fransen’s past, he recalls being profoundly impacted as a 12-year-old boy, in Vancouver General Hospital (VGH) after breaking his sternum following an accident while playing on the former sandunes at Garry Point in Steveston.

“One of the kids that was in VGH when I was admitted was getting treatment for leukemia,” Fransen said.

“I remember he took off his wig and it was a bit of a shock to me. He didn’t have long to live…the enormity of the situation has always stuck with me and motivated me to do what I can to fight this horrible disease.”

As of this week, Fransen has raised more than $16,000, half of which, he says, has come from donations he has matched from people in his profession.

As far as being trim for the ride and able to fit into a Ziggy Stardust outfit, Fransen’s nine-mile, one-hour round-trip commute by bike to work every day will just about have him spot on.

“I can get my head down and go pretty fast,” smiled Fransen, who navigates around the traffic chaos that graces Richmond’s roads by heading south from Seafair and then east along the south arm dyke.

*The Ride to Conquer Cancer runs Aug. 27 and 28 in aid of the BC Cancer Foundation. To donate to Fransen and his team, log onto ConquerCancer.ca, click on the donate tab and search for Joel Fransen.