The Dutch castle was first located in the heart of Downtown Vancouver during Expo 86
Jul 8, 2016 10:31 AM By: Matthew Hoekstra 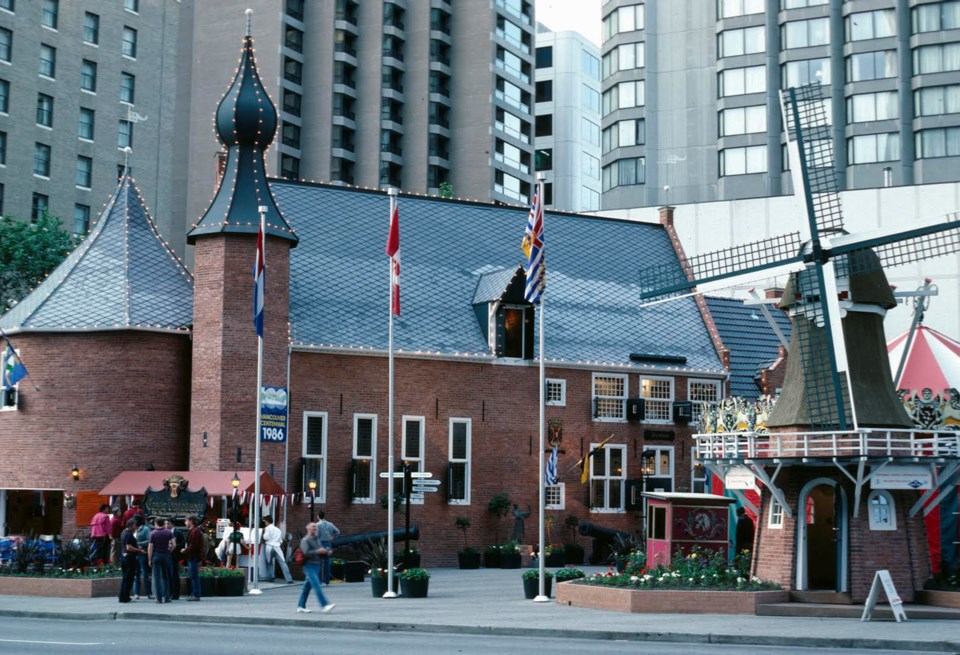 The Dutch castle, a familiar sight in South Richmond, was first located in the heart of Downtown Vancouver during Expo 86.Al Harvey photo (slidefarm.com

In need of cash for an out-of-province move, Sonia Wood was fortunate to land a job. Earning just $5.50 an hour, the 19-year-old Richmondite’s savings would prove to be meagre — but the job offered a perk unlike most — memories.

Wood’s job was at Expo 86, Vancouver’s coming-of-age fair that drew visitors from around the region and the world, and set Vancouver on a path of significant change 30 years ago. Wood, now a real estate agent in the Fraser Valley, worked at a kiosk that sold convenience items — gum, smokes, batteries, film —and rented strollers.

“They had all sorts of exhibits, if I remember correctly, about early life in Canada,” she said. “One thing I do remember is they had a show of Quebecois step-dancing. Lots of stomping around and music.”

Expo 86 was the biggest event B.C. had ever seen in 1986. The World’s Fair drew 22 million visitors to the north side of False Creek over six months.

“Expo 86 was a pivotal event in the city’s history, one that showcased Vancouver to the world, bringing global recognition and praise,” noted Vancouver Coun. George Affleck in a recent council motion seeking support for an anniversary party. “The infrastructure contributions from Expo 86 include the SkyTrain Expo Line, Science World, BC Place Stadium, Canada Place and the Plaza of Nations...”

Richmond wasn’t directly involved with the big show. Expo 86, as longtime local Coun. Harold Steves noted, was Vancouver’s party — unlike the 2010 Olympics, which had a dramatic effect here in Richmond.

Of course, many Richmond residents bought Expo passes — some companies even had payroll deduction plans to cover the cost of season passes — and CP Air proudly boasted it was the official airline of Expo 86. But the fair didn’t cross the Fraser River.

Yet, thanks to former B.C. premier Bill Vander Zalm, a piece of Expo 86 culture did come to Richmond after the fair ended. Remarkably, it’s still here today.

In 1987, a crew from Nickel Bros. house movers spent several weeks uprooting and moving of a Dutch castle — an Expo 86 attraction — to Richmond from its foundation in Downtown Vancouver.

The castle is a replica of the Coeverden Castle in the Netherlands — the ancestral home of explorer Captain George Vancouver. Vander Zalm bought the structure and had it barged from False Creek to No. 5 Road and Steveston Highway, where it became part of his theme park Fantasy Garden World.

“It was a phenomenal event,” said Vander Zalm about the move. “Hundreds of people followed the castle down the streets of Vancouver, particularly Howe Street. It was two o’clock in the morning and they took all the wiring down. The castle moved down the street with police cars up front and behind, as I recall it.”

Launched near the Burrard Street Bridge, the castle-laden barge was piloted to the south end of No. 5 Road. Once on land, a truck moved it into place at Fantasy Garden World.

“We used it for a Christmas store. Initially for a time we were thinking it could be a meeting hall or the likes of that. But we found shortly after that, as a Christmas gift-shop it was more of an attraction.”

Although the castle is perhaps best known for showboating during Expo 86, it was actually built—next to Pacific Centre Mall, at the corner of Georgia and Howe streets — for Vancouver centennial celebrations that same year, according to the City of Vancouver Archives.

The castle occupied prime downtown real estate in front of the Four Seasons Hotel, and once both parties ended, the brick building had to move.

Fantasy Garden World is long gone, but the castle can still be seen off No. 5 Road, awaiting its next chapter.

It’s now destined to become a child care centre at the entrance to a new No. 5 Road park as part of The Gardens development from Townline Homes.