Bunny colony on the wane at auto mall

While there still remains pockets of rabbit colonies scattered across Richmond, mostly created by pets being abandoned by their owners, the population of cute, furry critters calling the Richmond Auto Mall home is virtually down to zero.
Apr 6, 2017 3:49 PM By: Philip Raphael 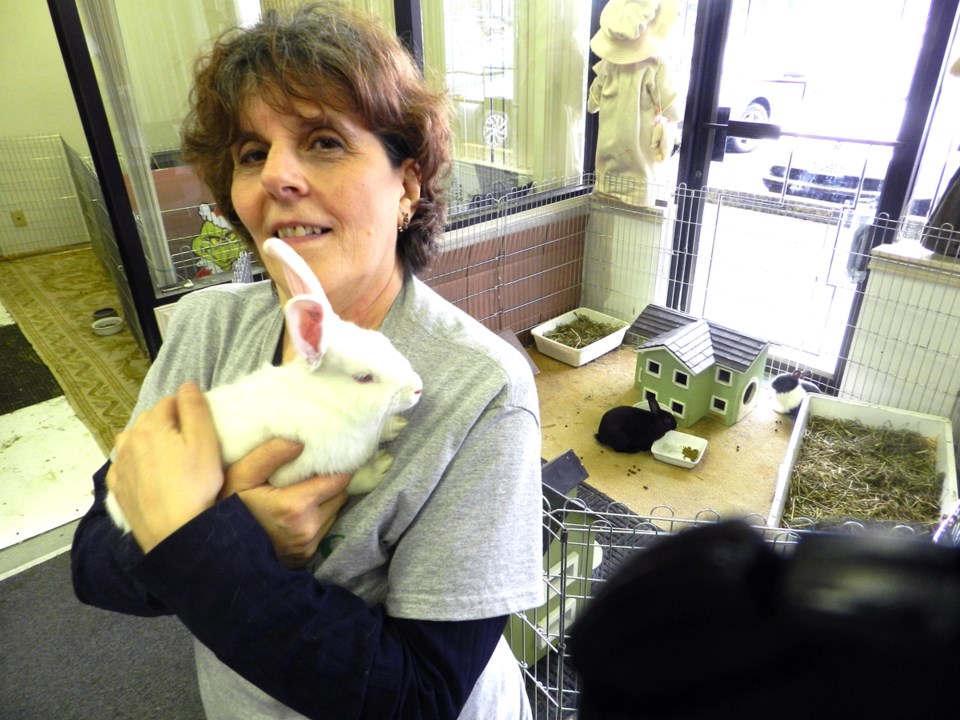 Sorelle Saidman, who runs the Rabbitats rabbit rescue organization, is hoping to attract bunny lovers to a special Easter event at their facility at the Richmond Auto Mall on April 15. Photo by Philip Raphael/Richmond News

While there still remains pockets of rabbit colonies scattered across Richmond, mostly created by pets being abandoned by their owners, the population of cute, furry critters calling the Richmond Auto Mall home is virtually down to zero.

According to Sorelle Saidman, who runs Rabbitats, a rabbit rescue and adoption organization based at the auto mall, consistent trapping efforts by her volunteers, plus a decrease in the number of animals dumped in the area, one of several hot spots in the city, have contributed to the dramatic decrease.

“When we started in 2012, the population peaked at around 300,” Saidman told the News on Wednesday.

Since that time, Rabbitats has been collecting the homeless bunnies and having them spayed and neutered, then either relocated at a rabbit sanctuary it runs in South Surrey, or adopted out to new owners.

Saidman said she was quite surprised at the apparent downturn in people dumping rabbits around the auto mall site, which had developed quite a reputation as a place to see rabbits.

“I thought that once people had heard that we were rescuing rabbits that there’d be an increase in drop-offs,” she said. “But the actual dumps have been reduced, although we just recently had a box of 10 rabbits at our door.”

Thankfully, those animals were not released into the wild, she added.

“That way, they didn’t get to reproducing. But there’s still bunnies being dumped elsewhere, almost every day,” she said.

To help discourage that, Rabbitats is holding its annual Easter Bunny Fest from 11 a.m. – 4 p.m. on April 15 at their auto mall location (13340 Smallwood Place).

In addition to the opportunity to view their collection of bunnies, Rabbitats will be advising visitors, keen on having one as a pet in time for Easter, what they’re in for.

“If they go out and buy baby rabbits at this time of year, when they hit maturity at five or six months, that’s when you see a lot of them being dumped,” Saidman said. “That’s because rabbits go through a period where their hormones kick in and for two or three months they go from cute and cuddly little bunnies to rabbits from hell.”

And that period coincides with the rabbits reaching sexual maturity. So, when those bunnies are dumped, the population can rapidly rise.

While the automall area population may be at an all-time low, it’s likely just a temporary lull.

“We’re on the edge of our seats waiting for the boom year,” she said.

“Every eight to 10 years, there’s a population explosion. And the last one was between 2006 and 2008. That’s when we also saw problems with all the bunnies at UVIC (University of Victoria). That’s also when Minoru Park started having serious problems with the population there.

“The most important message we want to convey to the public is that they need that education before they get a rabbit,” Saidman said. “And they have to know their rabbit has to be spayed or neutered. Otherwise, they will face behavioural issues.”

For females, that can be done at six months and with males as early as four months.

But if someone is still thinking of having a pet bunny of their own, Saidman said one of the best ways to determine if they are really ready is to visit Rabbitats.

“They can come and enjoy ours next Saturday,” she said. “The public can come down and we can tell them all about rabbits. If they need a bunny fix, come to our meet and treat event.”

To help accommodating visitors, there will be free shuttle bus service to the automall from both Lansdowne Centre and Richmond Centre malls.

For more information, visit the Rabbitats website at Rabbitats.org.