Swarming to hive of activity

Brighouse: However, some residents feel empty, gated homes hinder interaction
Graeme Wood Oct 23, 2013 12:00 AM
Previous Next
1 / 1 Graeme Wood/Special to the News Dave and Colette Young, with baby Brooke, enjoy a day at the playpark. Dave enjoys living close to the Canada Line, the city centre and to the park.
Expand
Previous Next

The Brighouse area is where most Richmondites come together from all across the city.

And living in the area gives one the chance to meet people from all across Richmond on a daily basis; People like Cindy Yee, who lives on Williams Road and drove her two sons to the Brighouse Richmond Public Library one afternoon to read books and study Mandarin while her daughter practised ballet at the Richmond Arts Centre. 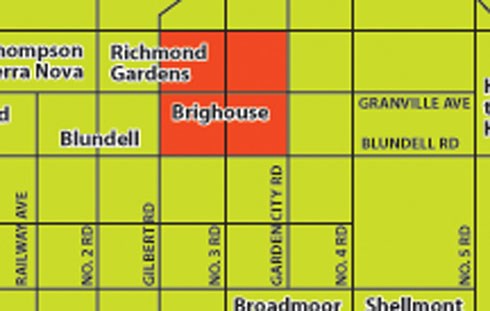 "It's a nice area where kids can concentrate to do their homework," said Yee, a 20-year Richmondite.

With such amenities, living around Brighouse is a popular choice for many and the neighbourhoods just south of Minoru Park and City Hall enjoy their location of not quite being in the hustle and bustle of the city centre. but being close enough to easily take advantage of it.

"I like living close to the centre of Richmond, close to the Canada Line and close to the park. It's nice being able to walk everywhere," said Dave Young, who lives in one of the many condos on Moffatt Road, south of Minoru Park, along with his wife Colette and their baby Brooke.

Moffatt is home to both new and old condos and apartments, and prior to the development boom in the city centre over the last two decades it was one of Richmond's most densely populated

Large homes with closed window drapes and gates in the front yard are a common site on Comstock Road near Gilbert Road and Granville Avenue. Many of them appear to be empty and some residents feel these types of homes minimize interactions among neighbours. neighbourhoods.

Another dense neighbourhood is southeast of Brighouse Park at the corner of No.3 Road and Granville Avenue. This is where numerous townhouse and condo developments surround General Currie Elementary School.

To the northwest of Moffatt is the corner of Gilbert Road and Granville, home of the No.1 Firehall. And southwest of this corner is a popular neighbourhood for Chinese immigrants.

Comstock Road and its adjacent streets are occupied by Chinese-Canadians like Hong Zhang who has a wife and two children.

He says he came to Canada for its health and education system.

"It's quite beautiful here and convenient to city hall," said Zhang of his choice to move in to a big new home on Comstock last February.

Zhang's neighbour Nancy Hills agrees the neighbourhood is convenient to all the necessary amenities. "Our home is within walking distance to everything -the library, pool -everything is within a 15 minute walk," said Hills, a Comstock resident since 1981.

But Hills questions if her street is presently a neighbourhood by definition.

However, she recalls a time when she believes it was. Her street was full of older split-level homes (like hers) on quarter-acre lots with large front and backyards, typically adorned with fruit trees.

Her children used to play with others on the street and she knew nearly everyone.

Today, such homes are a mere speckle amidst large modern ones with gated driveways and few trees.

The ESL teacher says that such homes have contributed to less interactions with her neighbours, who are already faced with certain language barriers.

"You used to be able to talk over the fence, now you just smile," she said.

Despite the changes to the neighbourhood Hills says her choice has always been to stay despite many (sometimes unmannerly) solicitations from real estate agents.

For Hills the positives still outweigh the challenges of rapid development.