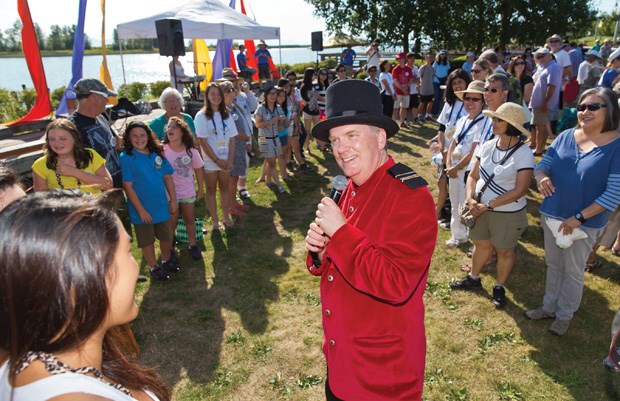 M.C. David C. Jones made sure everyone kept in tune and on time during the record bid back in August.

The record books head office in London, UK recently confirmed that the Richmond Maritime Festival achieved a new Guinness World Record under the category of “Most people in a nursery rhyme singing relay.”

“This is another great example highlighting Richmond on the international stage,” said Mayor Malcolm Brodie. “Each participant, along with everyone in our community, should be proud of this record-breaking achievement. We can now proudly say we are part of an elite group of Guinness World Records title holders.”

To launch this year's Maritime Festival, 180 participants gathered at Britannia Shipyards National Historic Site on Friday, August 9 to sing “Row, Row, Row Your Boat”. Each person had to sing just one word of the song. As a group, the participants had to sing the song repeatedly in correct sequence with no mistakes and in time to musical accompaniment.

Popular comedian David C. Jones entertained the crowd as emcee while official local judges, Richmond’s own Olympic rowing silver medalist Darcy Marquardt and seven-time Olympic judo judge Jim Kojima, presided over the event. After a few practice rounds, the singers sailed to victory by completing the task without any missteps and on tempo – smashing the previous nursery rhyme relay record of 154 participants.

An official Guinness World Record certificate confirming the Richmond Maritime Festival’s status is on its way to Richmond.