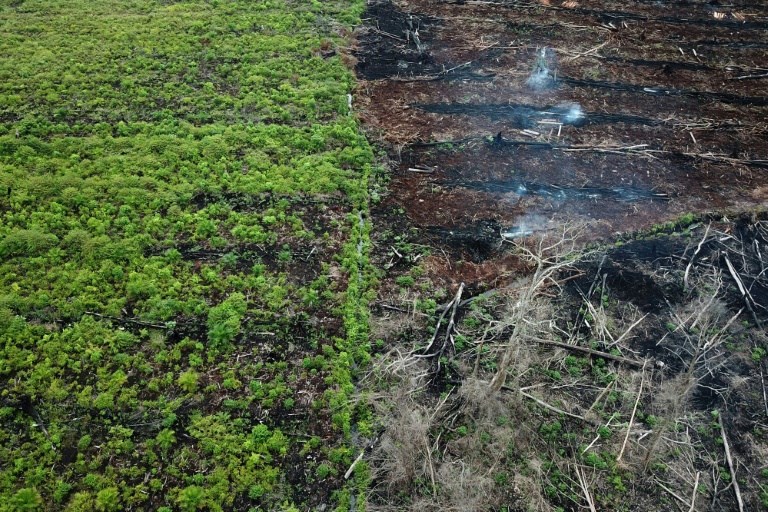 This aerial photo taken on March 3, 2018 shows a protected area of the Rawa Singkil wildlife reserve in South Aceh, which is being burnt in preparation for the opening of a new palm oil plantation

Habitat loss due to expanding plantations has pushed some of the planet's most iconic species -- including orangutans, tigers and some gibbons -- to the brink of extinction, the International Union for the Conservation for Nature (IUCN) said in a report.

A certification system designed to ensure sustainability is "far from fulfilling its potential," it noted.

But banning new production in the tropics would only shift the problem elsewhere as consumer demand for vegetable oil soars, the report cautioned.

"When you consider the disastrous impacts of palm oil on biodiversity from a global perspective, there are no simple solutions," said IUCN Director General Inger Andersen.

"Half the world's population uses palm oil in food, and if we ban or boycott it, other more land-hungry oils will likely take its place."

Rapeseed, soy and sunflowers require up to nine times as much land to produce an equivalent amount of oil.

All told, 193 animals and plants threatened with extinction on the IUCN's Red List of endangered species were found to have been harmed by the lucrative crop.

Monoculture palm oil plantations sustain only a small fraction of the plant and animal life found in the tropical forests they supplant.

In Borneo -- the world's largest palm oil producing region, with 8.3 million hectares planted as of 2016 -- half the rainforests lost from 2005 to 2015 were destroyed by plantation development.

Worldwide, palm oil plantations -- three-quarters of them industrial-scale -- cover 250,000 square kilometres, an area roughly the size of Italy or the US state of Arizona.

More than 90 percent of current production is in Indonesia and Malaysia, but plantations are expanding rapidly in central Africa and parts of Latin America as well.

"Because palm oil is grown in the species-rich tropics, this could have catastrophic effects on global biodiversity," the report's authors warned.

Areas into which the crop is poised to expand are home to more than half the world's threatened mammals, and two-thirds of threatened birds.

Oil palms, native to western Africa, produce 35 percent of the world's vegetable oil, most of which is consumed in India, China and Indonesia.

Three-quarters of all palm oil is used for food or cooking oil, with the rest found in cosmetics, cleaning products and biofuels.

In 2017, more than half of the palm oil used in Europe ended up in the gas tanks of cars and trucks, according Transport & Environment, a Brussels-based environmental watchdog group.

One solution promoted by environmentalists is to shift production away from intact tropical forest.

"There are three million hectares of degraded land in Kalimantan," the Indonesian portion of Borneo, noted Andrew Steer, President and CEO of the World Resources Institute in Washington D.C.

"Palm oil plantations are not evil in themselves -- the issue is where they have been put," he told AFP.

"If they are located on these degraded lands rather than pristine forests, it will also help the climate and local economies."

The Roundtable on Sustainable Palm Oil (RSPO) -- a voluntary certification programme set up in 2003 that covers about 20 percent of global production -- has only yielded "limited conservation improvements," the IUCN report said.

Palm oil development contributes to climate change and pollution when deliberate forest-clearing fires release CO2 into the atmosphere and lung-clogging smog into the region's air. The process can foul local water supplies as well.