It's just plain old No. 5 Road to most Richmondites and not everyone who works and lives on this street is looking for salvation, enlightenment or the purpose of existence.

That said, the approximate 20 religious institutions that line the road inbetween Williams Road and Westminster Highway are an integral part of the neighbourhood as they attempt to bond with themselves and their residential neighbours. 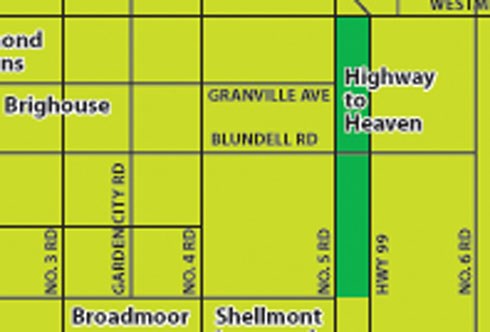 Because of the number of temples, mosques, churches and religious schools in the area Candy Wong decided six years ago to set-up her floral shop, Florist on the Fifth, on the corner of Blundell Road and No. 5 Road.

"They need to buy flowers to visit their God," she explained, adding the location is ideal because there are no other stores nearby.

Wong said her busiest days are Friday and Saturday. Ironically, she closes the shop on Sunday to attend church in Downtown Vancouver.

Nearby is the home of Suphi Tekbulut, a Turkish Canadian who has lived and raised children on No. 5 Road for several decades.

He has noticed many changes since city council allowed such institutions to build on agricultural land in the 1990s.

"It has become crowded on Sunday and Saturday, religious days. Other than that (we) enjoy living here.

"The only problem is on Sunday there's too much traffic and parking on the road. There's not enough parking space," he said.

Tekbulut, who has an Islamic background but doesn't attend a mosque, notes that the institutions have stripped away the farming culture that once strongly existed along the road.

"This used to be farmland, you see this temple, this used to be blueberry farms, but no more," he said pointing to the opulent Thrangu Monastery.

At the monastery is where you can find monk Rabjor Dawa, who manages the facility.

He says the institutes try to share parking, an act of inter-faith cooperation that has gained much publicity.

"We share with them and they can use our facility as we use theirs," he said.

Dawa says with acts such as those this neighbourhood is an example of how religions can coalesce.

"All these schools teach in their own way, but the basic foundation talks about how can we benefit others. So, seeing all these places together I think it can represent a completely different view where people have a misunderstanding of a certain religion," said Dawa.

Another example of the religious groups working together is at the India Cultural Centre of Canada where its president, Chain Batth, keeps a box of toys and supplies in his office for the Richmond Jewish Day School located next door.

The centre acts as the school's emergency meeting point in the event of a disaster.

"We leave the toys here to keep the kids busy. It's no problem, we're all humans, we're all the same, maybe different cultures or different languages, but as humans we're the same," he said.

Batth says his centre is open to anyone.

He notes the weddings that are hosted at the centre are attended by all ethnicities and affiliations.

The centre also offers anyone in the neighbourhood a free vegetarian meal, no questions asked by Batth who is rather insistent on having one sit down and eat.

Batth said he is also hoping to build a seniors care facility open to all religions along No. 5 Road with the help of neighbouring churches, mosques and temples. "We all get old," he said.

Of course, if one prefers a more in-the-moment outing in the neighbourhood there is the nearby "Church of Beer and Sports," or rather, the Kingswood Pub, which according to staff has wedding parties from a variety of religious institutes come into the establishment on weekends.

Leigh Gillett, a long-time resident of the area and interim manager at the Kingswood Liquor Store, said the neighbourhood is homey, likely on account that there are many townhouses in the area.

"It's neighbourly in the sense everyone knows each other," he said.