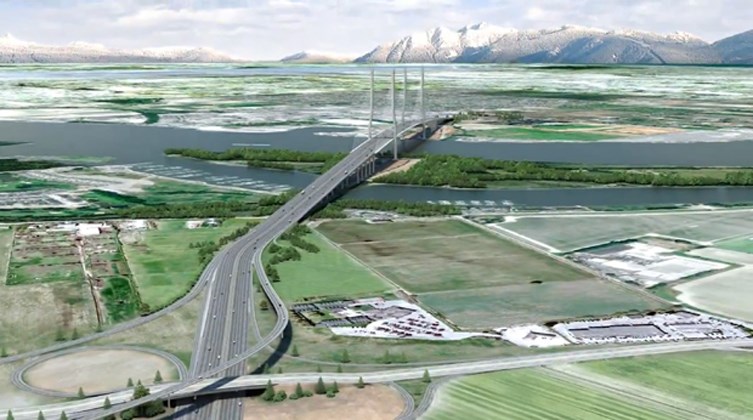 Photo submitted Artist’s rendition of a new bridge over top of where the Massey Tunnel currently sits shows what the 10-lane span may eventually look like.

News last Friday that the province is planning to relieve traffic congestion at the Massey Tunnel by building a new crossing over the South Arm of the Fraser River is being received with skepticism.

And one of the biggest doubters, so far, is Richmond Mayor Malcolm Brodie.

While a new bridge — shown in a government video as having 10 lanes — may deal with traffic in the immediate area where delays through the 54-year-old tunnel are chronic, Brodie feared a new bridge would only shift the bottleneck several kilometres along Hwy. 99 to the south end of the Oak Street Bridge.

“We need to look, from a point of view of traffic and infrastructure, at the entire corridor. Not just one part of it,” Brodie said. “So, I am waiting to hear if there is anything more to the plan, and, if so, what the other components are. I do believe it is a bottleneck, and it significantly impacts

Richmond in many ways. What I’m not convinced of is that they have come up with the answer just to say that there will be a new bridge.”
Brodie added he is also keen to hear how the project is going to be financed, although he suspects it to be a P3 (Private, Public, Partnership) arrangement, similar to the new Port Mann Bridge, which charges tolls.

Clark made the announcement at the Union of BC Municipalities convention in Vancouver and told the assembled group of politicians work was scheduled to commence in 2017, following consultation phases that began last November. There was no word on the price tag for bridge construction and eventual removal of the Massey Tunnel.

Beyond the finances, Brodie said he was also concerned the bridge would have a hefty environmental impact on the Richmond side and believes it is being pushed through with little regional transit planning coordination and consultation in order to accommodate Port Metro Vancouver’s desire to have large, Panamex-sized vessels ply the waters of the Fraser River’s South Arm.

“It’s part of a bigger strategy so that the biggest ships in the world can come up that river to various port facilities,” Brodie said.

“The three main beneficiaries of building a new bridge is the port, the port and the port,” Steves said, adding the tunnel’s removal would provide the required draught for large ships to continue unimpeded up the river to proposed facilities such as an airport fuel terminal in Richmond and a coal transfer site at Surrey Fraser Docks.
Currently, Steves said, there is a very narrow window for large vessels to be able to navigate the shallow waters over the tunnel.

“It’s about one hour every day at high tide,” he said. “And that’s not on every day of the year, either.
“There’s probably 50 to 100 days when the tides aren’t very high. And with Panamex tankers needing about a mile of water to stop, if they are late going up or down the river they can find themselves running up on the rocks.”

But Steves’ concerns don’t rest here in Richmond. He’s worried that if the bridge is built it will open up large areas of Delta farmland for residential and industrial development, “just the same way the Oak Street Bridge did in Richmond in 1958.”
“The opening of the Oak Street Bridge coincided exactly with the rezoning of farmland in Richmond,” Steves said, adding that by the time the Agricultural Land Reserve was enacted in 1972, Richmond lost roughly 12,500 acres of farmland.

“So, basically what this bridge will do is open up Delta to development and definitely trigger the heavy industrialization of the Fraser River, which was never intended.”

As for alternatives, Steves pointed to the port at Prince Rupert as the logical site for expansion.

“Prince Rupert is in economic decline — there’s not enough shipping there. And it’s the most direct (rail) route across Canada,” he said.
Steves also suggested the interior communities of Ashcroft and Kamloops have long asked to be considered for container traffic.

“There’s thousands of acres of cactus land that can be used for an in-land (container) port.”

As for dealing with traffic congestion, Brodie said more consideration should have been given to public transit improvements and a shift in the hours the port operates to lessen the burden on the tunnel prior to a decision on building a new bridge.

“We don’t need a new bridge to take the first step to decongest that corridor,” Brodie said. “Give more money — sustainable funding — for the buses, and get more people out of their cars and into the buses. And secondly, get the port to adopt 24-hour operations, and get a lot of the deliveries made by the big trucks done by the time most people get onto the road.

“I think that would go a long way towards the kind of goals we are setting.”

Steves added he would much rather see the government make good on its promise in 2006 to twin the tunnel and include provisions for rapid transit extending to South Surrey.

“There’s only one reason for changing that decision, and that’s to get these Panamex super tankers up the river with jet fuel, and get these huge coal ships down the river from Fraser Surrey Docks,” he said.

But what of the existing tunnel?

Brodie said he holds out faint hope it could be retained as part of the project, something the province threw cold water on stating the link has just 10 to 15 years of useful life remaining, “before major components will need to be completely replaced.”

The ministry also said that while it is safe for current use, the tunnel does not meet modern seismic standards, despite undergoing a seismic retrofit program in 2006 which included structural repairs to tunnel walls and some upgrades to ventilation systems, emergency pumps and power systems.

An early warning system was also installed to alert drivers in the event of significant seismic activity.

Pleased with the new bridge announcement is the Richmond Chamber of Commerce whose members stand to benefit from an anticipated improvement in the flow of traffic across the river.

“Many businesses in Richmond have a real need for great transportation corridors, not only for the movement of goods and services, but also employees to and from work,” said Howard Harowitz, a chamber board member and chair of it’s policy and advisory committee.

“We’re firmly behind the premier’s announcement and pleased to see she’s going ahead with getting this done.”

The choice of a bridge crossing over the existing tunnel also matches what a majority of chamber members preferred when asked in a survey, Harowitz said.

“And we know that Richmond is not just a community that Hwy. 99 travels through,” Harowitz said. “This is an important corridor for people either originating from or going to Richmond.”