Claudia Li was raised in Richmond and works on social environmental change in the Chinese-Canadian community in Metro Vancouver
Apr 1, 2014 4:27 PM By: Richmond News 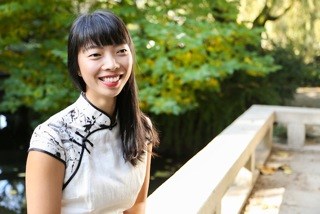 Local environmentalist and social activist Claudia Li was recently elected as an Ashoka Canada fellow for her community and culturally-rooted efforts to raise awareness on issues such as sustainability, food security and the environment.

"I'm honoured to be named an Ashoka Fellow and be a part of this network. Having support from one of the leading authorities on social change strengthens my work in building bridges across my communities to honour our cultural heritage as well as protect the planet,” said Li.

The founder of the non-profit group Hua Foundation is now working on a new Intercultural Food Literacy program as part of The Choi Project, which aims to close the knowledge gap of Asian vegetables in the Metro Vancouver market. Li echoes claims of some food experts that culturally relevant food is critical to supporting local agriculture systems. The project also aims to promote local, organic and hormone-free food and will feature an online seasonal guide on choi vegetables, to be found at huafoundation.org this July.

In partnership with the Richmond Food Security Society, a survey of members from the ethnic Chinese community in Metro Vancouver will gauge what they eat and how carious decision factors such as price and convenience play into their choices.

The Hua Foundation aims to encourage Chinese-Canadians to participate in local food issues. It was the subject of a Richmond News feature story on agriculture in the city.

A Chinese-Canadian, Li also founded Shark Truth to raise awareness in the Chinese-Canadian community about the problems caused by killing sharks. She worked with youth to promote environmental sustainability on the issue and enacted change in many Chinese restaurants.

Li, born in Richmond of parents who emigrated from Hong Kong, is said to have reframed the issue in a culturally understandable and sensitive manor when the shark fin soup controversy exploded in Richmond a few years ago. Instead of vilifying the Chinese community Li tried to frame the matter in a way it could understand.

"Through Shark Truth, Li juxtaposes shark fin soup with the traditional values of zero waste food consumption as a topic that introduces members of the ethnic Chinese community into a larger dialogue about conservation and sustainable eating," noted the Ashoka Canada website.

Ashoka is a global non-governmental organization that promotes social awareness and assists social entrepreneurs. Its network is said to span across 72 countries and supports members with social and financial connections and collaborative opportunities.

Li said the fellowship will not only help raise awareness for Hua, but also serve as an inspiration for other young social entrepreneurs.

"On a social level, I think the fellowship really showcases to young people that come from a similar background as me (e.g. immigrant parents, young people of colour) that while not all the cards are always in our favour, with hard work and staying true to your heart, big things can happen and it is indeed possible to make change in a way that embraces all parts of who we are," said Li.