Hong Kong's pro-Beijing leader and the city's police chief apologised Monday as they visited a mosque that was struck with blue dye from a water cannon during the latest bout of violent protests.
Oct 21, 2019 4:30 PM By: Richmond News 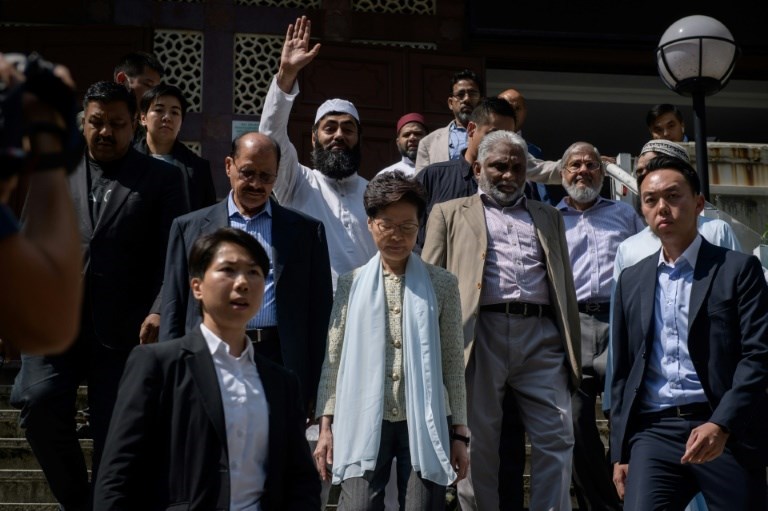 Kowloon Mosque representatives said Hong Kong leader Carrie Lam apologised for the dye incident, and that it was accepted

Hong Kong's pro-Beijing leader and the city's police chief apologised Monday as they visited a mosque that was struck with blue dye from a water cannon during the latest bout of violent protests.

The entrance to the Kowloon Mosque, the international hub's largest, was sprayed by a water cannon truck on Sunday, causing anger among both local Muslims and protesters.

Police use the dye -- often mixed with an irritant -- as a way to identify protesters but it has frequently left streets and buildings daubed in a garish blue.

Video footage shot Sunday showed the truck pulling up outside the building during confrontations with protesters, pausing and then spraying around half a dozen journalists and bystanders who were gathered on the street outside.

The group, who did not appear to be protesters, was struck twice, with much of the bright blue jet painting the mosque's entrance and steps.

Police released a statement on Sunday saying the mosque was hit by mistake.

On Monday, Chief Executive Carrie Lam and police chief Stephen Lo paid a brief visit to the mosque, surrounded by a phalanx of security guards.

"Mrs Lam extended an apology for the inadvertent spraying of the mosque's main entrance and gate," her office said in a statement

Police also issued their first public apology for the conduct of officers since the protests erupted in early June.

Mosque representatives told reporters the apology had been accepted and they also thanked worshippers and Hong Kongers who flocked to clean the mosque soon after the incident.

The original Kowloon Mosque was built in the late nineteenth century to cater for Muslim soldiers from British-ruled India.

It was rebuilt in the early 1980s and remains a centre of Hong Kong's 300,000-strong Muslim community.

Lam's office and the police did not respond to requests for comment on the visit.

A police source told AFP the commissioner did apologise and further details would be released later in the day.

Hong Kong was convulsed by more violence on Sunday as the city nears five months of seething pro-democracy protests.

Police responded with water cannon, tear gas and rubber bullets in clashes that lasted well into the night.