Richmond Gardens
Graeme Wood Oct 23, 2013 12:00 AM
Previous Next
1 / 1 Graeme Wood/Special to the News Kids from Samuel Brighouse occupy the adjacent playground after school.
Expand
Previous Next

The neighbourhood was built on land purchased by the city from the Brighouse family in 1962. 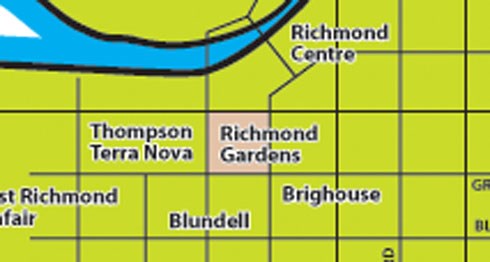 It's geographically defined by the looping Azure Road that connects to multiple crescents within the quadrant. The road itself connects to Gilbert in front of both the Gateway Theatre and Richmond General Hospital.

It's mostly lined by older homes - most of them renovated to an extent - that were built throughout the 1960s, which gives the area a kind of throwback feel to it.

Between many of the crescents is a somewhat secret pedestrian path that leads to the recently renovated Samuel Brighouse elementary school.

After school, the adjacent park bursts with children of all backgrounds, as parents watch them on the playground and in the newly dugout community garden.

"This is a close-knit area. And it's accessible to Minoru Park, the jogging area and the high school. Everything's walking distance within a perimeter," said Ivy De Grano a mother of four children who spent a late afternoon at the playground with three fellow Filipino-Canadian friends, while watching their children play.

the neighbourhood unique. After some hums and haws and a bit of muddling there were answers like: "Minoru Park," "The hospital," "The medical services building," and "Oh, the community garden is nice."

Then Linda Pereyras chimed in excitedly: "The mall!" At which point everyone exhaled. "Oh yes, the mall!" "Of course! The mall!" "I love the mall!" Did someone say mall?

Of course, they are referring to the popular Richmond Centre mall, a mere five minute walk from where they sat (Sidenote: Five of the world's 20 largest malls are in The Philippines).

Indeed, Richmond Gardens is the frontline of the border between single-family homes and the city's downtown core. Apartment buildings are visible above the trees lining the northern edge of the park.

The shopping convenience and access to amenities is a paramount feature for its residents and the new Richmond Oval adds to that.

"I think this is a nice place to live because it's close to everything," said Ricky Bernado.

The neighbourhood, like many in Richmond, has a decidedly multi-ethnic component to it.

Also at the park, sitting nearby, were two Chinese mothers and friends, Lisa Lee and Hua Lee, who have resident status in Canada.

"I think people are nice, they have good manners, the school is nice, children are nice. You feel you are respected and you have rights," said Lisa Lee when asked about where she lives.

She came to Canada with her family for work, and plans on returning to China. Her most pressing goal is to have her child learn English and, in fact, she often has the urge to move out of the neighbourhood because it has so many Chinese residents.

She noted that an ESL education assistant told her that it would likely take her children longer to learn English because they lived in Richmond.

"I think the Chinese impact is too much here," she said.

Lee said the Chinese community at first can be a welcome site, especially for those who can't communicate fully, but it can hamper full involvement in the community.

Living in Richmond, as a whole, has been a good experience.

"It's not like China, so many local people are welcoming," she said.