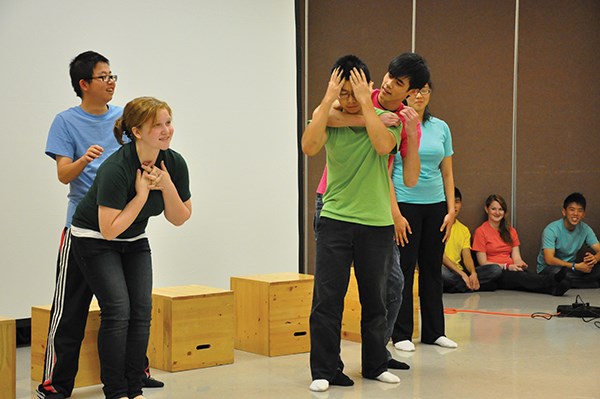 Richmond in 3D saw students teaching other students about the effects of bullying and racism, among many other things.

A week after winning a Richmond Arts Award for its work in the youth community the Richmond in 3D troupe has had to significantly cut back on its self-empowerment theatre workshops at the city’s schools following a bureaucratic shift in funding.

"The program did not meet their criteria," said Parm Grewal, executive director of Richmond Multicultural Community Services, referring to the federal government.

RMCS is the non-profit organization that runs Richmond in 3D, a program of workshops, which send strong messages of anti-racism, anti-bullying and inclusiveness.

Funding for Richmond in 3D had been in place for the last five years through a provincial government grant program known as the Welcoming and Inclusive Communities and Workplaces Program, which aimed to support new immigrants and create open dialogue for youth of all backgrounds.

This year the funding was pulled from the provincial program by the federal government, which is now using that money for similar programming of its own, according to Grewal. However, that new programming is now only being targeted to certain newcomers to Canada.

"We do not distinguish between newcomers and longer-term residents. Basically everyone is welcome and the government's priority now is to fund people new to Canada, under three years," explained Grewal, noting it would have been too difficult to produce workshops specifically for newcomers of three years or less.

"It's a challenge as I don't think settlement ends after three years. Settlement can be a long process based on their challenges. Making a community work and be inclusive is about helping people with longer term struggles," said Grewal.

The program will now operate on a limited, voluntary basis.

Grewal also said one of the things that worked best for the program was the fact new immigrants could mingle with both longer-term immigrants and multi-generational Canadians and talk about their unique experiences.

"The program seemed to have a lot of impact and built leaders among peers in schools. That's why we believe it's a program that should continue," she said.

The youth troupe consists of high school students in the city who take on leadership roles after receiving training from adult RMCS staff, such as Richmond in 3D's director Mark Pawson, a professional actor and expert in non-violent communication skills.

"The program morphed because of government request for more anti-bullying workshops. So we expanded and there's a great demand for it," said Pawson.

The troupe works mostly at elementary schools and focuses on role-playing, among other things. At the end of the workshops one of the hopes is that the younger students will be better able to empathize with their peers and at least understand and respect one another's differences.

Ostrodsky is one of many troupe members who recently heard of the cuts. She said over the past few years she has seen a number of young students change in a matter of days. She recalled one story in particular about a boy who on day one was too shy to speak but by the third day had the entire group role-playing his own ideas.

"Through the third workshop we get the kids to do the acting and this boy made so many suggestions because, I think, it was his story in a way. We ended up in a group and he ended up telling us a story and so we re-enacted it," said Ostrodsky.

Pawson said Metro Vancouver and, particularly, Richmond's diversity was both a helping factor in making Richmond in 3D a success and also a reason to keep it going.

"As much as it is multicultural and kids accept other things, there's still an unknown that doesn't get talked about. So with this project we talk about things that aren't normally talked about. The Canadian experience is a melting pot of different traditions and religions. These kids don't normally share those things about themselves but when they do, their lives become more enriched," said Pawson.