A neighbourhood in transition

East of No. 4 Road on Odlin Road, one will find Odlin Park within a relatively new subdivision of large, tightly-packed single-family homes.

It's very peaceful and has a large field, a small hill, a basketball court, two tennis courts and a playground.

It's also where two new Richmondites from opposite ends of the world met and formed a seemingly unlikely friendship.

Claude Martin, who moved to Richmond this year from Montreal, is an avid tennis player who met fellow tennis enthusiast Lynn Fang at the tennis courts during the summer. 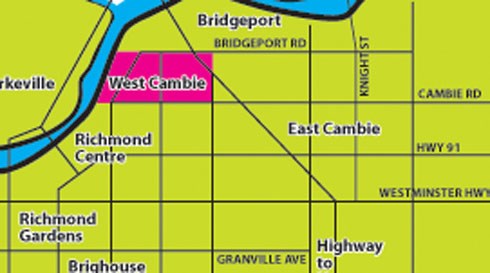 Fang came from China three months ago to live and work in the West Cambie area.

And when Martin moved to Richmond, he thought the large Asian population would make it hard to meet people. "But it hasn't been," he said.

The two play tennis in the park whenever they find free time and they appear to be an anomaly within the neighbourhood.

After all, on a sunny afternoon in October, they were two of only a handful of people in the park.

Nevertheless, Martin and Fang are arguably an example of neighbourly interactions that should only continue to grow in the rapidly growing/changing area of Richmond known as West Cambie.

It's because of such changes that you don't need to get in a DeLorean to go back in time in Richmond. Just start driving down Odlin Road at the aforementioned park.

First, you'll pass by Tomsett elementary school and a gauntlet of new condo developments until you reach Garden City Road.

"This area has drastically changed because of all the condos where there used to be homes," said Erik Olsen who lives in a duplex on Odlin Road that is now overshadowed by two condos.

Olsen said he's lived in several areas in Richmond and as it stands, where he lives now "isn't a neighbourhood" because he has little interaction with people who live around him.

But the long-time Richmondite said he appreciates the proximity to surrounding amenities and the convenience of shopping centres in the area.

Indeed, West Cambie has a bounty of ethnic restaurants in and around the Asian malls such as Aberdeen Centre and Parker Place.

To reach this Golden Village from Olsen's home one must continue on Odlin Road and cross west of Garden City.

Here, north of Alderbridge Way, is also an old sub-division of homes built as early as the 1950s.

There is a mix of typically classic Richmond homes such as ranchers, split-levels, duplexes and large, two-level rectangular homes, most all of them with big front lawns.

Only a few new modern homes have been built in the area.

On nearby Sorenson Crescent is where Sandy Chappell lives.

Chappell used to use an existing three-acre lot behind his home to raise sheep as a hobby.

He said the neighbourhood has faced an increase in crime because of the nearby Canada Line, but that neighbours have joined forces to combat it with a neighbourhood watch program. "We've got several families that are really good," said Chappell.

"The [Canada Line] came in and that is seemingly the mark of the downturn. I got a lot of scary looking dudes walking around - some of them with hand tools in plain sight."

Similar streets such as Alexandra Road north of the Garden City Lands have already been slated for commercial development. So, whether this area remains in the next decade is anyone's guess, other than, perhaps, developers'.