Anne Gillrie-Carre is joined by Chris Kennedy to guide a young McMath senior girls team that suddenly is back in the provincial basketball rankings
Dec 15, 2016 2:18 PM By: Mark Booth 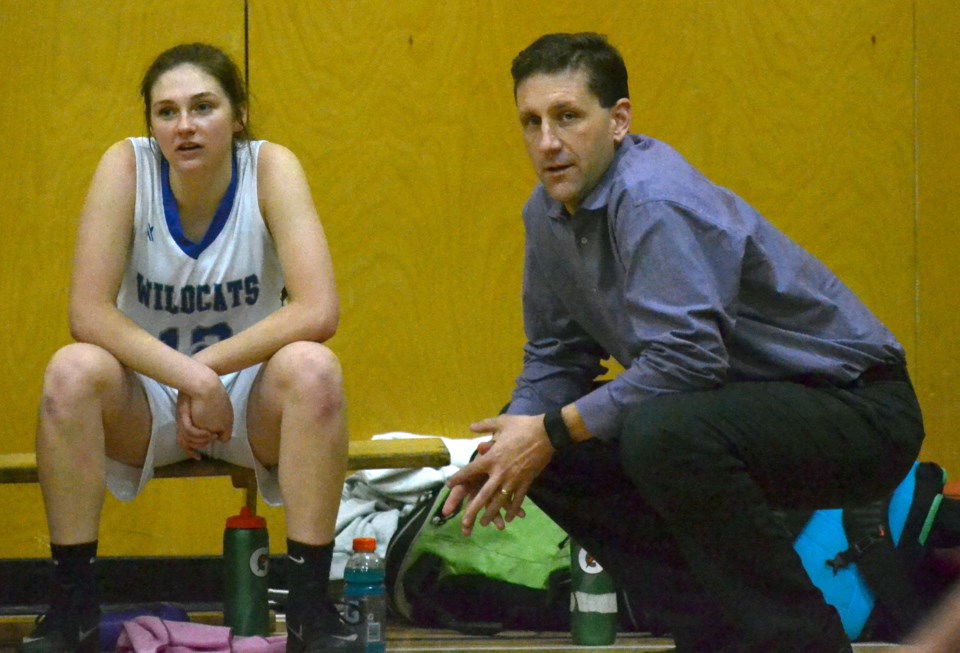 Chris Kennedy looks on with McMath standout Abby Zawada during the team's win over Richmond High on Monday night. Kennedy is back coaching high school basketball in Richmond for the first time since 2001.

The McMath Wildcats are putting their doubters in place and it’s a familiar face to Richmond basketball helping guide the upstart team.
The Wildcats are coming off a magical season that concluded with a loss to Brookswood in the B.C. “AAA” championship game last March. An outstanding senior trio of Jessica Jones (SFU), Bobbi-Jo Colburn (Calgary) and Jessica Zawada (Fraser Valley) have all taken their careers to the university level. The rebuilding job became even more extensive when Grade 11 guard Lyric Custodio transferred to Brookswood.
McMath seemed destined to try and defend its Richmond championship and nothing more. At least so it seemed.
The Steveston school was no longer on the ‘A’ list for high-profile tournaments but did get a late invite to last weekend’s Victoria Police Classic when another team dropped out. The Wildcats served notice by upsetting No. 8 Claremont (53-52) and honourable mention Heritage Woods (61-54). They also hung tough with No. 5 Lord Tweedsmuir (76-53) and defeated top 10 ‘AA’ ranked St. Michael’s University (68-42).
They now carry a 10-2 record into the holiday break and have earned honourable mention status in the latest provincial “AAA” rankings.
The legendary Anne Gillrie-Carre is back to guide the Wildcats but was looking for some help after Paul Jones moved on. In stepped Chris Kennedy who is coaching high school ball in his hometown again for the first time since taking the McRoberts Strikers senior boys team to the 2001 AA provincials. The one-time Richmond teacher is now Superintendent of Schools/CEO in West Vancouver.
Kennedy is getting the chance to coach his daughter Elizabeth, who remarkably, aged up as a Grade 8 to have a supporting role in last year’s memorable run. The Wildcats staff also includes Carre’s daughter Kira, who is teaching in Richmond, and another parent volunteer — Steve Flynn.
“I’m super busy with work and can’t make everything and Anne is too,” explained Kennedy. “It’s a nice combo that way. You feel lucky to have a chance to coach your daughter coming through high school. I’m super appreciative of the opportunity and the school has been great in letting me do it when my schedule allows.”
Kennedy only has to look at his roster to be reminded of his past experience here. Grade 11 Jessica Porter’s adopted brother is Atnas Maeko — the former Richmond High star who Kennedy coached on the provincial team back in 1999.
“It’s all Richmond. Everyone is connected,” smiled Kennedy. “We have lots of good multi-sport athletes on this team that get into the gym a lot.”
Abby Zawada is proving she is more than capable picking up the scoring slack created by the departure of her sister Jessica and others. The Grade 11 standout averaged over 30 points per game in Victoria. She already has a wealth of experience at the senior level, joining the team three years ago.
Senior guard Mahara Gibson-Zeinoun also saw some playing time last season. Grade 11 Maratha Melaku provides some scoring punch too.
On the Island, the Wildcats starting five featured four Grade 11s and a Grade 9.
“It’s kind of like Abby and her friends,” laughed Kennedy. “I thought we were going to do better than people think but this is way better. We will be competitive to make (provincials) and I didn’t think that would be a possibility.
“It was more like a two-year plan with this group where we will give the top teams a run next year. This is going great so far and it feels good to suddenly see the girls on the radar.”