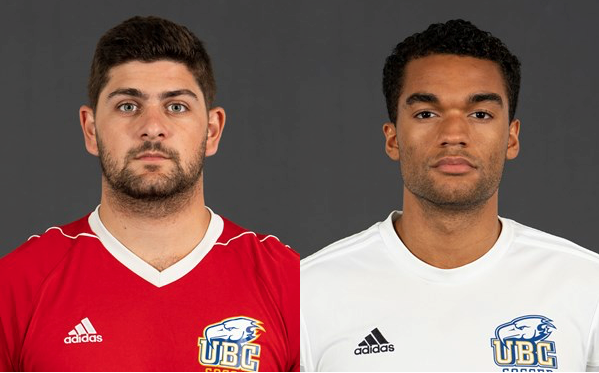 Goalkeeper Jason Roberts (left) and forward Caleb Clark are expected to have leading roles with the UBC Thunderbirds this season.UBC Athletics

If the UBC Thunderbirds are going to defend their Canada West men’s soccer championship, it will be plenty of Richmond F.C. talent helping them get there.

The T-Birds are pre-season favourites to win their 19th regular season title as they get set to open conference play Friday in Abbotsford against the University of Fraser Valley before returning to Thunderbird Stadium Sunday (2 p.m.) to take on Trinity Western.

Head coach Mike Mosher’s roster features six local products — including fourth-year goalkeeper Jason Roberts who is expected to get the bulk of the work in net. Midfielder Ryan Sangha returns for his final season, coming off a 2017 campaign that saw him appear in 19 games and score three goals.

They are joined by four first-year players who come to the Point Grey campus with plenty of experience.

Forward Caleb Clarke, who is fourth-year eligible, was among the first players to come through the Whitecaps Residency Program and eventual signed with the MLS club. He more recently took his career to Europe with stops in Germany. Clarke also earned international caps with Canada’s U20 and U23 teams.

Forward Riley Pang has brought his collegiate career across town after a couple of seasons at Simon Fraser University. He made 18 appearances with the Clan last year, scoring three goals and adding four assists. The Steveston-London graduate also played for the PDL’s TSS Rovers this summer.

Defender Theo Lorenz has joined the Thunderbirds after an impressive run at Quest University that saw him earn Pac West all-star honours in 2016. The Squamish school suspended its varsity athletics program earlier this year.

Defender Liam Robinson is another product of the Whitecaps Residency program who initially came through Richmond FC before heading to the B.C. Premier Soccer League with Surrey United.

UBC’s women’s soccer team is also expected to be contending for the Canada West championship.

A pair of Hugh Boyd graduates — fifth-year defender Emma Kallner and fourth-year forward Amelia Crawford are among their key players.