Action-packed schedule starts Thursday at Boyd and Minoru Parks with teams from across B.C. competing
Jul 4, 2018 9:00 AM By: Chris Parry 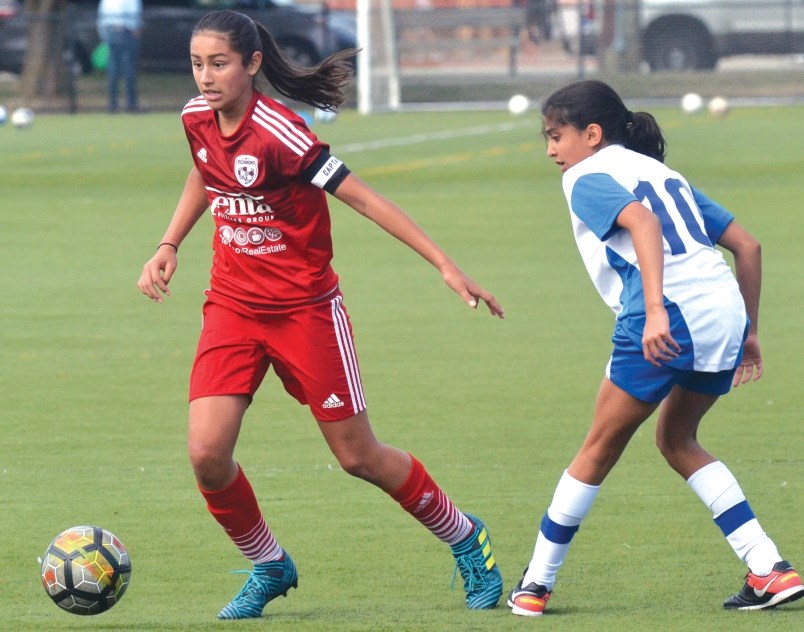 The U14 Richmond Strikers will have home field advantage when B.C. Soccer's Provincial "A" Cup Championships start Thursday. It's taking a big volunteer effort from within the Richmond FC organization to host the four-day event.Mark Booth

The tournament will bring together the top four boys and girls teams from ages U13 to U18, which will engage in pitched battle at Hugh Boyd fields and Minoru Park, with the final games to be played and medals handed out on Sunday.

Last year in Surrey saw the Richmond FC U18's and Richmond Girls U16's take home gold. The 2018 event, locally sponsored by Novella Wealth, sees only one local team having qualified for the final four groups, that being Richmond Girls' Strikers U14 side, which has prepared for their tournament with a host of friendly games against Richmond boys teams.

The Strikers have tradition on their side, however: Richmond teams have taken home gold eight times in the last 12 years and, during that time, only two city sides have lost in the final game.

Richmond FC Chair and Local Organizing Committee representative Rein Weber is looking forward to showing the visiting 47 teams and their families what Richmond has to offer.

“Our kids and the organizers and sponsors and the city have really come together to put this event on,” he says. “An event this size is no easy thing to stage, but you have a lot of really committed people working at every level in this sport in Richmond to give the kids a place to be their best.”

Despite having missed out on the finals, almost 100 of Richmond's soccer playing kids have stepped up to volunteer their time to ensure the event's success. Local businesses have also lined up to support the event, with the Richmond Olympic Experience, Clip'n'Climb, Richmond Go-Karts, Time Escape, and 6 Pack Indoor Beach working with the local organizing committee to provide discounts and prizes, to encourage visiting teams to stay in the city between games.

Local football fans, warmed up by the frenetic athletic success of the 2018 World Cup in Russia, are encouraged to come out to Hugh Boyd and Minoru over the weekend to watch B.C.’s best young players fight for their highest honours.

And for those kids encouraged to take their football support out onto the training ground, Weber says registrations are now open for the fall season at both Richmond FC (www.richmondfc.ca) and Richmond Girls Soccer (www.richmondgirlssoccer.com).