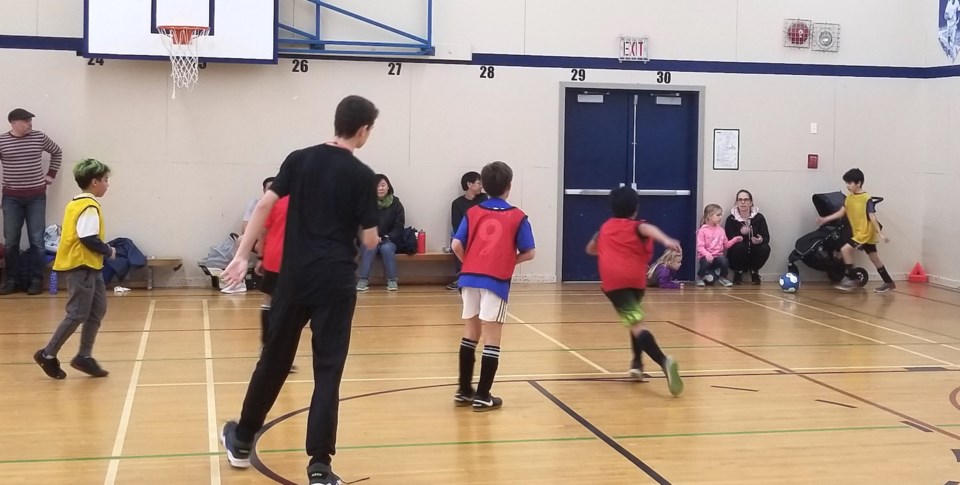 In front of a packed Mitchell gym filled with proud parents, the junior division (U9-U11) Cambie Highwaymen and Seafair Stingers traded 4-3 wins in their two leg series, which had to be settled with a penalty shootout. With volume levels on the sidelines hitting fever pitch, it took a whopping 7 rounds of penalties to declare a winner in Seafair. At McKay, the junior Terra Nova Terrors pipped the King George Royals in a five-minute golden goal session, 5-4.

In senior division (U12-U15) action, the Minoru Mariners came out strong in their debut game to show they'll be tough to beat, with a two leg sweep of the hard fighting King George Royals, though the second leg went to extra time to be decided, 5-4, to claim the competition points.

Abder-Raheem Serir, Dawson Epp-Zehn, Scotty Su, and Brandon Chen make for a tough starting four for the Mariners, with players coming together from local club Richmond FC and soccer academy TSS, as well as beginners trying organized soccer for the first time.

At McKay, the senior division Terrors put the cleaners through the Stingers in the only blow-out of the weekend, with U12 Richmond FC rep player Mars Chen showing fancy footwork in several of Terra Nova's goals, taking it to players as much as two years older than him.

Week 2 action saw the closest game of the competition so far this past Sunday, when the junior Cambie Highwaymen and King George Royals split their two leg series at Mitchell, and ultimately went to golden goals to decide the winner. The heroine of that first game turned out to also be the youngest and most inexperienced in her team; Emma Allen, who led off the penalty shoot out and nailed her shot like a pro, taking home the win for the King George squad. The Highwaymen battled back to win the second leg and claim the points in extra time.

Senior action was no different, with the Seafair Stingers jumping out to a quick first leg win against the tough Minoru outfit 5-4, despite being without two of their better players, but the Mariners ran away with the second leg, 5-2, taking the series to yet another extra time.

RISL rules dictate squads trim down from 4 vs 4 during regular game time to 3 vs 3, with players being pulled out every two minutes if there's no deciding goal scored until we're left with 1 vs 1. That's what it took to split the Stingers and Mariners, with both teams asked to send in their champions for a 1 vs 1 finisher, which saw Mariner Abder-Raheem Serir tuck away a finisher to bring the house down.

This Sunday Night Soccer series continues until the Christmas break when new registrations will be added to bring in new teams and, as necessary, new venues across the city.

Registration costs only $50 for the season and is welcome to any player from U9 to U15. The intention is to have kids playing as close to home as possible, in a fun setting with no coaches, bringing the kids a chance to play out of the winter weather. To sign up, visit Richmond FC's website.