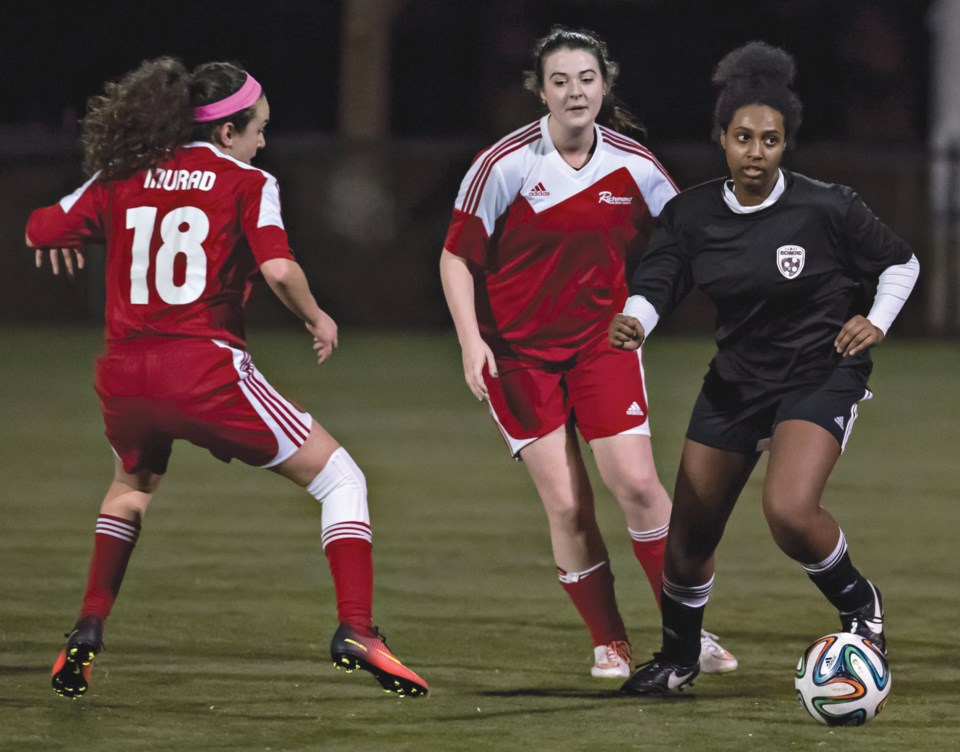 Paul Pedersen was doing a little diamond hunting on a crisp but at least not snowy night at Hugh Boyd Athletic Park.
The Steveston resident and UBC women’s team assistant coach was evaluating talent at the Richmond Girls Soccer Assocation’s inaugural College Showcase game. The friendly, between the organization’s U18 (Richmond United) and U17 (Richmond Force) Division One sides, was an opportunity for post-secondary programs to see potential recruits in a live game-action environment. The match was also filmed and will be sent out to schools that were not in attendance.
Pedersen, along with the rest of the UBC coaching staff that is headed by Jesse Symons, estimates they take in on average of 10 games each weekend. With the launch of the new B.C. Premier Soccer League (HPL) season, it would seem like the logic place to find university and college prospects but not so fast says Pedersen.
“I can say with 100 percent certainty there are hidden gems out there and that’s why it’s important for us to get out to games as much as possible. On this 2000 (born) Richmond team alone there are four or five kids that should be playing in the B.C. Premier League. For obvious reasons they are not and it’s great Richmond Girls Soccer put this game together for us to come out and watch,” he said.
The College Showcase is one of several new initiatives launched by the RGSA executive as they look to provide opportunities for its graduating players to continue on with the “beautiful game.”
UBC is one of the powerhouse programs in the country and typically is looking for a recruiting class of five to six players each season. The Thunderbirds’ current roster feature RSGA products Emma Kallner and Amelia Crawford. However, UBC’s commitment goes beyond its own best interests.
“We have the theory, and it was Jesse who brought this into our culture, that there is a place for every girl to play at the post-secondary level,” explained Pedersen. “It may not be with us but we want to help these kids achieve that goal. It’s a special thing to be playing for a post-secondary school.”
Pedersen’s interest in the College Showcase also went past his UBC scouting duties. He is set to take over the head coaching reigns of the powerhouse McMath senior girls program this coming season.
“There are probably 10 kids out here who go to McMath,” Pedersen smiled.