Keeper having a ball with other passion 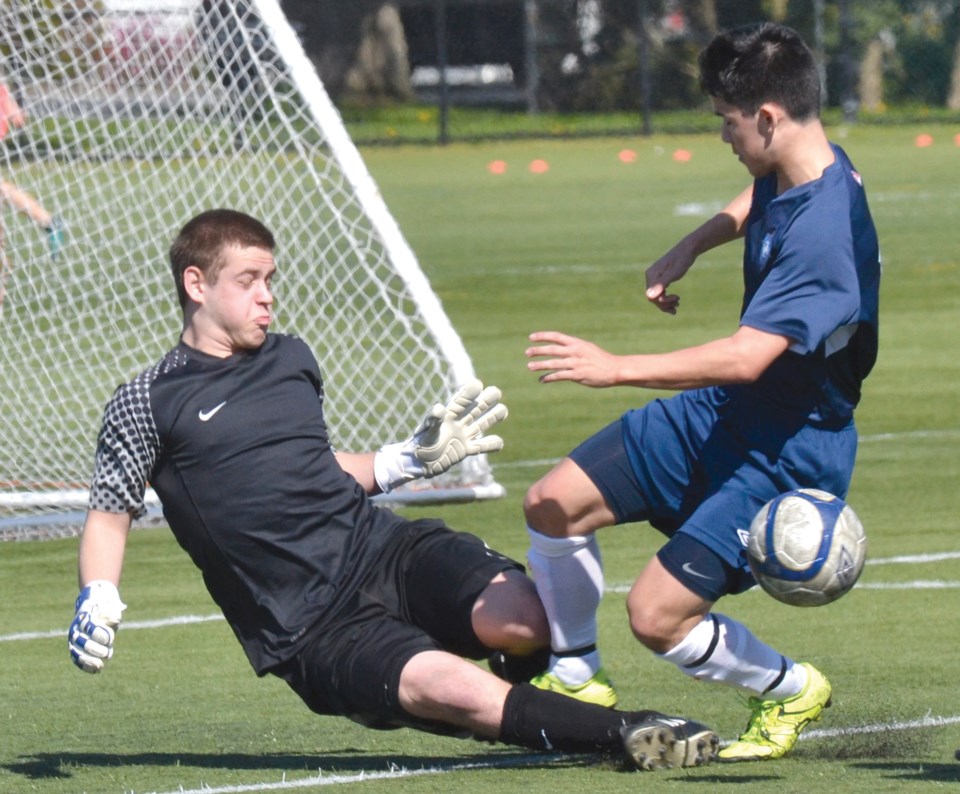 Daniel Judkowicz comes up with a key stop during his team’s big Coastal Cup quarter-final win on Saturday in an all-Richmond United U18 match-up. The Grade 10 McRoberts student will also be playing for Canada this summer at the World Junior Ball Hockey Championships in England.Mark Booth

Daniel Judkowicz wants nothing more than to back-stop Richmond United into the Provincial “A” Cup Championships even though he won’t be available for the showcase tournament.
The talented goalkeeper helped his upstart 1999 Metro team pull off a 3-2 quarter-final upset in penalty kicks over 1998 United in an all-Richmond U18 Coastal “A” Cup quarter-final match-up Saturday at Hugh Boyd. The result puts the 1999s significantly closer to returning to the provincials in early July.
That’s when Judkowicz’s other passion is taking him to England.
The Grade 10 student at McRoberts Secondary will be in Team Canada colours at the World Junior Ball Hockey Championships in Sheffield. He earned a spot on the Canadian roster after having a leading role for the gold medal winning U15 West Coast Wolverines at the 2015 Nationals in Newfoundland.
The selection process also factored in his play at the Western Cup Challenge last summer. He will be joined by his Richmond/South Delta Ball Hockey Association teammate Thomas van Veenendal.
“I remember going to (the B.C. team) tryouts and not expecting much,” recalled Judkowicz. “It didn’t take long to realize we were some of the better players and we actually had a shot at making it. Then we played our hardest at nationals and won. I just never expected to be on Team Canada one day.
“At the beginning of the soccer season, one of the first things I did was check the schedule and realized Team Canada would be going at the same time. I feel bad for (potentially) abandoning them but we already have contacted someone to come in.
“This opportunity is like a dream come true. I just played ball hockey for fun and never thought this could happen.”
Judkowicz participated in the long-running Richmond Cosom Hockey League when he was encouraged to try ball hockey in the spring as well. He initially continued to play in net until a serious condition prevented him from bending his knees and kept him sidelined for six months.
When he did return to the arena, he switched to playing defense and has never looked back. His athleticism allows him to be a two-way standout and his leadership is evident too. He has been a captain or assistant on every team he has played for in the past six years.
“When you are playing goalie, there are just some things you can’t control compared to a player,” continued Judkowicz. “I also like to have that leadership role and I’m always talking to my teammates.”
Judkowicz nearly quit soccer a couple of seasons ago until being encouraged to age up and try out for the Richmond 1999 Metro team. He not only made the roster but also serves as a mentor for the Richmond FC, initially as a volunteer and now as a part-time paid position, assisting with training sessions once a week.
He also works in sales at a Richmond soccer store which is helping pay for the opportunity to play for Canada. The estimated cost of the trip is $3,100, with the national team program receiving little in the way of funding.
When he is not playing sports or working, Judkowicz also volunteers as an assistant coach for Richmond/South Delta Ball Hockey, as well as at the Ladner Leisure Centre, for his potential interest of becoming a lifeguard one day.
For now, his focus is helping his soccer team continue its unexpected march in the Coastal Cup playdowns.
Typically the U18 Division is dominated by the second-year teams, however, Richmond has now knocked off two of them and will be looking for another victory Saturday against Coquitlam Metro Ford in the semi-finals.
“When I first came to tryouts (a couple of years ago), it didn’t take me long to realize I could win something with this team. It’s a great group of players.”
Corner kicks…
Three other Richmond teams also remain in the Coastal Cup playdowns.
U13 Rangers are off to the “B” Cup semi-finals after their thrilling 4-3 home field win over Surrey United. Richmond will travel to Abbotsford this weekend to take on the AMF Lightning.
On the girls side, the U18 Ravens have advanced to the “B” Cup final four with an impressive 4-0 win over North Coquitlam. The Ravens will host Surrey FC Tigers on Sunday (11 a.m.) at Hugh Boyd.
In girls “A” Cup play, U15 Richmond FC will face Surrey United Guildford in the semi-finals thanks to a 1-0 win over Vancouver FC last Sunday.