Hood ready to go to work for Richmond F.C.

As Richmond FC’s first-ever appointed professional technical director, most would expect Steve Hood’s task to be immensely challenging. The soft-spoken Englishman suggests the city’s boys soccer club has already been in good hands.
Aug 7, 2015 10:37 AM By: Richmond News 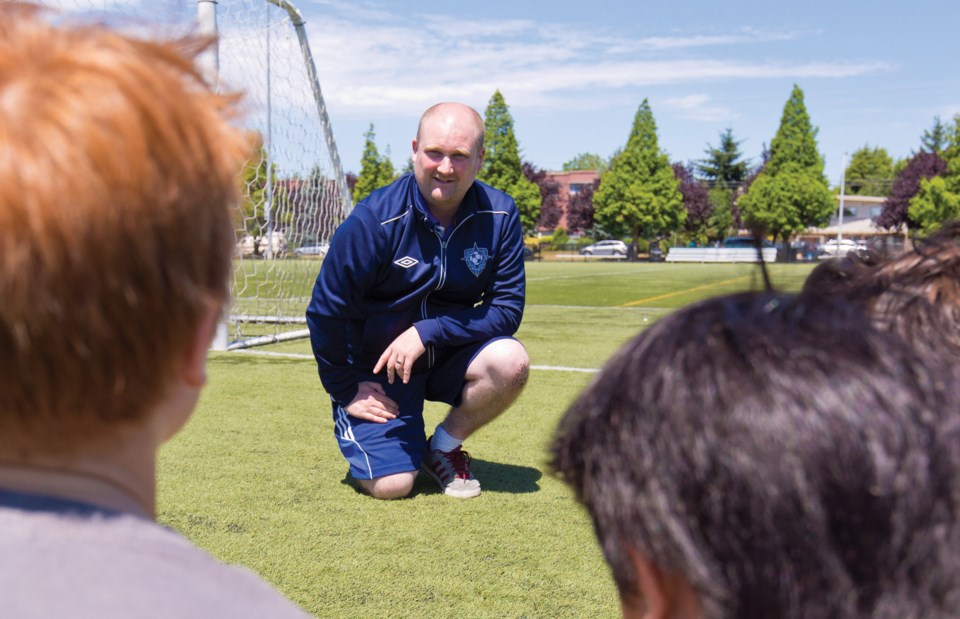 As Richmond FC’s first-ever appointed professional technical director, most would expect Steve Hood’s task to be immensely challenging.
The soft-spoken Englishman suggests the city’s boys soccer club has already been in good hands.
Hood was quick to credit the tireless work of long-time executive Doug Long and how he looks forward to building upon the foundation already in place.
“When I was working with B.C. Soccer’s Grassroots Program at the time, one of the clubs I was assigned was Richmond,” Hood recalled. “I found it to be very progressive in lot of ways with the things they have been doing. Credit goes to Doug who has been here many years and established a lot of positives and won many battles as well.”
It was that lasting impression of Richmond F.C. that made Hood jump at the opportunity when the technical director (TD) position was posted. It was a move that brought Hood and his young family back to the Lower Mainland after serving as TD for Prince George Youth Soccer.
“Initially it was to give it a try and see how the rest of Canada lives (in the winter),” laughed Hood. “It was a great club, with great facilities and a great community. It was two years of developing and establishing their programming but I also knew an opportunity like this in Richmond doesn’t come up very often.”
On the pitch, Hood played up to the university level and for a “few local clubs” in England. Like many, he graduated from school, unsure what he really wanted to do until he started doing some community coaching at recreation centres and began earning his certification.
The interest and passion reached a point where he enrolled at the University of South Bank in London and earned the Higher National Diploma Science of Soccer.
He also achieved his FA Level 2 and the Football Leaders award from FA of Wales. That paved the way to work at the Cardiff City FC Academy. Hood also was hired on by Challenger Sports which run British Soccer Camps abroad, including in North America where he enjoyed a stint in Texas.
It was back in England, while finishing his degree, where he met his future wife Linda. The Richmond native convinced him to move Canada and to the Lower Mainland.
Hood was working in a local fish shop until he was hired by Saibo Talic — founder of the Vancouver-based European Football Schools.
“Saibo gave me my first opportunity here and is one of my big mentors,” said Hood. “I have a lot of respect for him.”
His excellent work and growing reputation got him “head hunted” to serve as program director of the North Shore Soccer Development Centre where he held the position for eight years until the move to Prince George.
The family, which includes 5-year-old twin daughters, arrived in the Lower Mainland in May which gave Hood an opportunity to observe Richmond F.C.’s spring activities.
His main focus will be on the grassroots U5 to U12 levels, with further development and implementation of programs and curriculum based on Canadian Sport for Life’s Long Term Development Model.
“I’ve done a lot of observing and met a lot of people,” said Hood. “There’s been plenty of discussions and reading of documents to establish that picture and put pieces in place. I can see in those areas that may need tweaking and improving to develop the overall structure to the program.”
Hood is also looking forward to working with the club’s many volunteer, as well as staff, coaches.
“You can’t be everywhere at once and Richmond has given a lot of support, especially within the grassroots level. You need to have a strong professional staff that can assist. I have seen a lot of good up-and-coming coaches who are former players with Richmond. There are definitely some that can be developed and hopefully move on.”
In the ever competitive world of amateur youth sports, player retention is critical for an organization to grow and succeed.
“The best way to monitor your success is how many return the following season,” Hood added. “If you can provide a positive experience for these kids, they are generally going to be excited and want to come back and play soccer.
“Often in coaching, we stop and correct mistakes. Sometimes, players can be frightened to make those mistakes. You have to allow them to play and discover, figure things out for themselves. There is a balance there too where you need to provide assistance and guidance as well.”