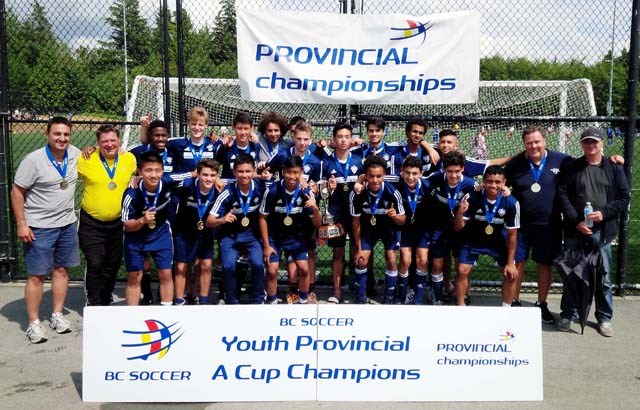 If they’d sat down to script a storybook ending to their season, the writers at Richmond United’s Metro Under-18 select boys team couldn’t have been any more dramatic.

Battling away in the Provincial A Championship Final against Burnaby Selects at South Surrey Athletic Park on Sunday, the game was locked at zeros deep into extra-time when disaster struck for Richmond.

United keeper Seb Kriwoy was adjudged to have handled the ball outside the box and was given a second yellow card, resulting in a red card, with a penalty shoutout looming.

Centre-back Devon Gautreau, who hadn’t played in goal for three years, was handed the keeper’s gloves for the last few minutes and the shootout.

Gautreau saved Burnaby’s second kick of the requisite five and, with Richmond leading 4-3, the hero of the day produced another stop to crown United Provincial A Cup champions.

And according to team coach John Gattens, within moments of winning, the boys sought out at the side of the field their former coach Roberto Sciascia. (Sciascia is currently suspended by BC Soccer after being charged by the RCMP for alleged on-field incidents last year involving a player at Richmond FC who is unconnected to the team.)

“(Roberto) was much on the minds of the…team as they won the Provincial Championship,” said Gattens.

“It was a fantastic game and Coach Roberto was instrumental in moulding a team capable of winning the...Cup.

“It was also a fantastic way for the now graduating players to finish their last game in youth soccer.”

Richmond's Julius Zhang eyeing Olympic battle, versus Canada
Nov 24, 2020 10:06 AM
Comments
We welcome your feedback and encourage you to share your thoughts. We ask that you be respectful of others and their points of view, refrain from personal attacks and stay on topic. To learn about our commenting policies and how we moderate, please read our Community Guidelines.