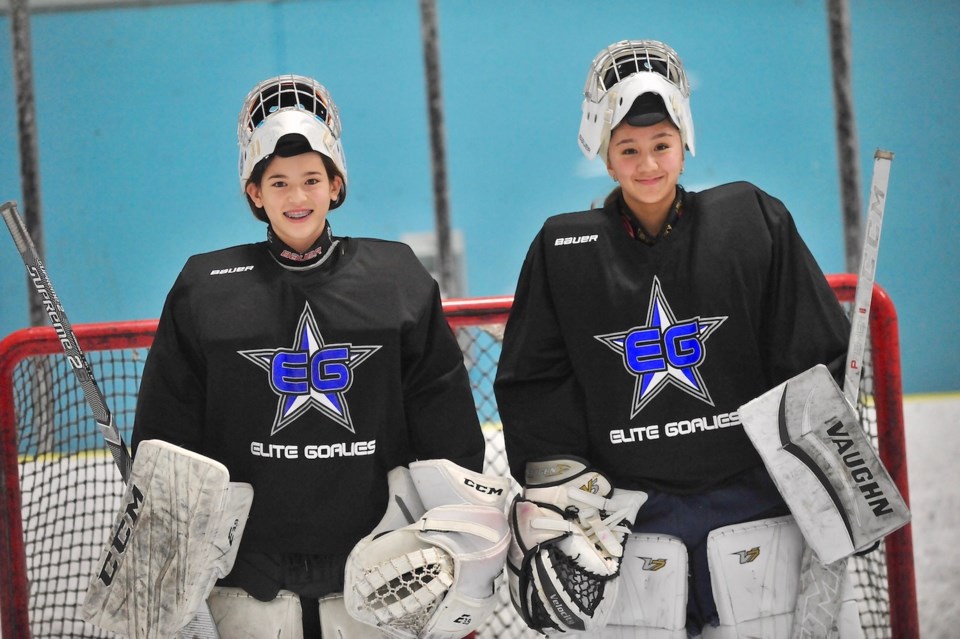 The goaltenders capped off their historic season at the tier one level by helping the Richmond Bantam A1 Jets capture the Pacific Coast Amateur Hockey Association President’s Series title.

The Jets claimed the four-team playoff with an unbeaten 2-0-1 record.

Lim-Metz made 32 saves in a 6-2 win over Coquitlam then turned aside 26 more shots in a 2-2 draw with Cloverdale. Mackay had a 24 save performance in a 5-3 victory against the Vancouver Thunderbirds.

In total, the girls combined for six shutouts, a pair of tournament MVP awards, a gold medal at the Richmond International and a silver at another tourney.

The pair made history last fall by beating out seven other netminders for the two spots on Richmond’s top Bantam team.

They both stepped into the crease for the first time when they were six with the Richmond Ravens Female program and along the way have become best friends. Both are Grade 9 honour roll students at Hugh Boyd Secondary School.

MacKay was the first to move over to boys hockey when she made Richmond Minor’s Atom A1 team. Lim-Metz re-united with her when they both made the Blues’ Pee Wee A1 squad for the 2017-18 campaign. Last season they played for the Jets’ Bantam A3 and A2 teams respectively — paving the way for their A1 spots this year.

They have been fixtures in the Richmond-based Elite Goalies Canada program for years — working mostly with Pasco Valana who also happens to be goalie coach for the national women’s team, along with former pros Mike Valley and Alex Auld.

Now Lim-Metz and MacKay are likely headed over to female hockey at the Midget age level next season.

Lim-Metz has already been training with the Fraser Valley Rush on a regular basis and was to join the BC Midget AAA squad for the playoffs until they were cancelled due to the COVID-19 pandemic.

Mackay was supposed to be playing this spring for the Prospects Female U16 Team that was slated to enter tournaments in Toronto and Boston.

Both girls were also going to attend Team BC U16 and U18 camps that also have been postponed indefinitely.