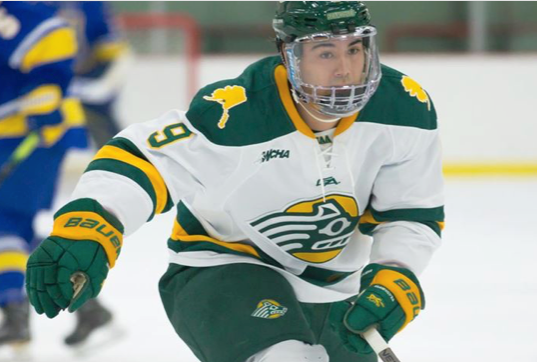 Former Sockeye Nick Wicks has earned WCAHA Rookie of the Week honours after leading Alaska Anchorage to its first win of the season on Saturday night.Alaska Anchorage Athletics

Nick Wicks has wasted little time in making an impact at the collegiate level of men’s hockey.

The 21-year-old former Richmond Sockeyes standout was named Western Collegiate Hockey Association (WCHA) Rookie of the Week after leading the Alaska Anchorage Seawolves to a 4-0 win over in-state rival Alaska on Saturday night. Wicks scored the first two goals of his NCAA career and also assisted on another. He was credited with five shots on goal and also dominated in the face-off circle by winning a team-high nine draws.

The South Delta Minor and Delta Hockey Academy product signed with the Seawolves after a productive three-year stint with the B.C. Hockey League’s Merritt Centennials. He also spent one season in the Pacific Junior Hockey League where he led the Sockeyes in scoring. Nick’s younger brother Garrett now plays for Richmond and is currently the league’s top rookie in scoring with 18 points in 15 games.

The Seawolves (1-3-0 overall) welcome Omaha this weekend and then head to Alabama Huntsville.