JJ Schmidt moving to the Okanagan after a remarkable volunteer run with track and field club
Feb 9, 2017 1:50 PM By: Mark Booth 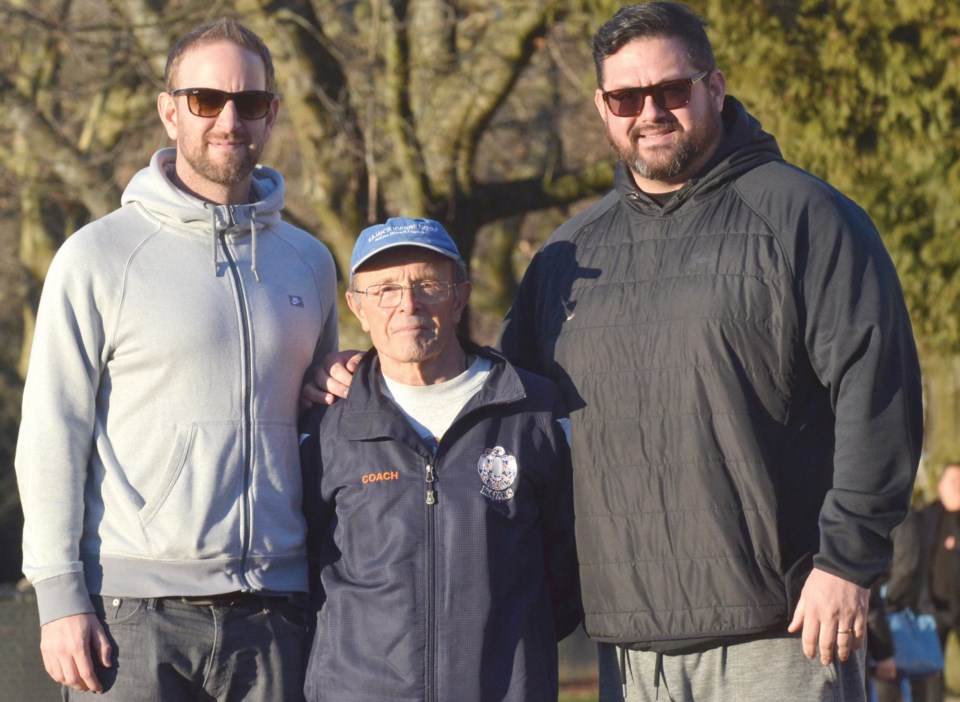 Kajaks Track and Field Club co-chair Jared Hulme (left) and head coach Garrett Collier with JJ Schmidt who is moving to Vernon next month with his wife Jacqueline after spending the last 36 years as a volunteer coach with the Richmond club.Mark Booth

If Jean-Jacques Schmidt had it his way, his training group would be following him up to the Okanagan and it would be business as usual.
Instead, the man everyone calls “JJ” is saying goodbye to Richmond and a remarkable 36-year commitment as a volunteer coach with the Kajaks Track and Field Club.
Schmidt and his wife Jacqueline will leave for Vernon in March after purchasing a home near Predator Ridge. He will be neighbours with good friend John Currie — another longtime Kajak and Richmond school teacher who moved to the Interior after retirement.
“My wife and I wanted a change of lifestyle,” explained the 76-year-old native of France with his French accent still prominent. “We have been living in Richmond since 1973 when it was really just a big village back then. We have seen it grow so much. We made the decision, talked to our kids about it and even the Kajaks. They are like my family too.”
It was back in 1979 when his daughter Frederique showed her potential as a runner as a student at Gilmore Elementary. Her teacher encouraged her to check out the local track club and Schmidt came along. His life was about to change forever.
Frederique not only signed up but her father offered his assistance and joined the Masters training group to run himself. His coach was Kajaks co-founder Dr. Doug Clement.
At the age of 40, Schmidt went on to become an accomplished runner, regularly competing in marathons and consistently finishing near the top of his age group.
He also established his coaching career — earning certification to train everyone from middle distance to cross-country runners. He started working with the grassroots Kajaks Junior Development program and moved on to older kids until 2000. That’s when he took on the Masters and lead that group for the next 16 years.
“When I first joined the club, the Masters group was very competitive under Doug Clement,” recalled Schmidt. “I learned a lot, just the way he coached and how he ran the program. We stayed in touch over the years and he continued to give me advice on coaching.
“The rest, I have really learned from the athletes themselves. Basically you can see what works and what doesn’t over the years and you perfect your trade.”
Schmidt says the greatest challenge as a Masters coach is the wide range of age and ability of his athletes.
“You need to know what they can do. What is their potential and what are their limitations,” he continued. “The (young kids) can do almost anything. With Masters I can’t ask a 70-year-old to do with a 40-year-old is doing. I have to learn to know my athletes. You develop a close relationship with them so you can understand what they want to achieve. I find it extremely rewarding.”
With his passion for coaching still burning strong, Schmidt plans to continue on in Vernon. He already knows where a new track was recently built and the city is hosting the 2017 B.C. Senior Games. He intends to stay in contact with his Kajak training group — following their progress and offering advice.
Still, it won’t be the same not seeing him around Minoru Park on a regular basis or involved in other club functions from board meetings to helping organize events.
“There is so much respect and admiration for him,” said Kajaks head coach Garrett Collier, whose late father Richard was a close friend of Schmidt. “My dad always had good things to say about JJ and it’s hard to quantify what he means to the club. He has been part of it in so many different ways and so many different capacities. He was a tireless volunteer who spent a lot of time away from his family.”
Kajaks co-chair Jared Hulme also happened to be trained by Schmidt as a member of the Masters training group. He and Collier were born the same year Schmidt started at the club.
“It doesn’t matter what we are doing, JJ was always there,” he smiled. “It’s going to be really weird not having him around anymore.”