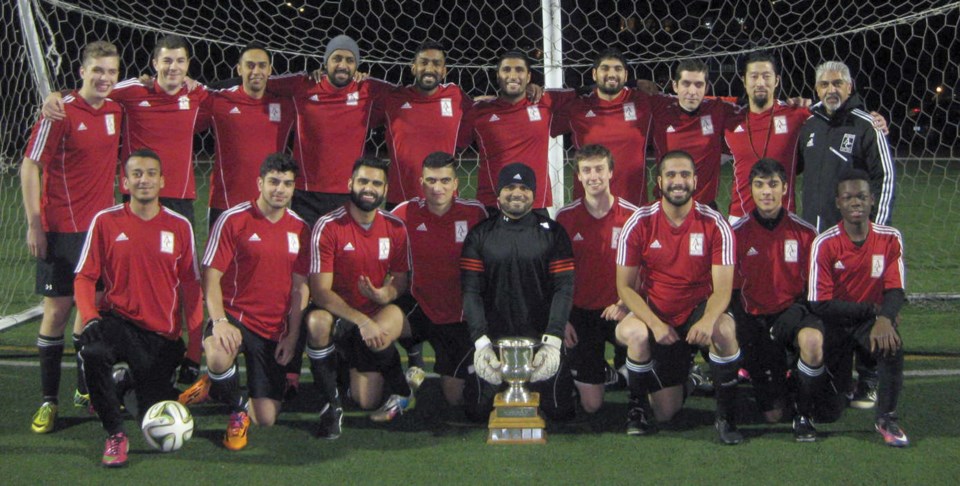 It’s been a breakthrough season in a big way for one of the mainstays in the Richmond Adult Soccer Association.
AC Richmond has captured the First Division regular season title in convincing fashion — rolling to an unbeaten 16-2-0 record in the 10-team table. They were 11 points clear of runner-up Richmond All-Blacks (12-3-3) and had top spot locked up weeks earlier.
The dominating run was somewhat unexpected given AC only managed a 5-12-3 record in the RASA’s old Premier Division. The league reconfigured for the 2015-16 campaign — eliminating the Premier flight entirely and expanding the First Division to feature the top 10 teams.
AC Richmond’s latest infusion of talent turned the club into an instant contender. Richmond Youth Soccer graduates Jeevan Sandhu, Evan Dhaliwal, Tawifq Jamal, Rida El Chami, Marcus Ribi and Amrit Nijjar have all been key additions. They joined a younger nucleus that includes Danny Neufeld, Jasmit Dhari and Jason Dulai. Throw in veterans Maninder Mann, Jithan Virk, Amar Bhullar and Shon Samujh and terrific team chemistry was created.
“Our past teams have had great and not so great years but with this current mix of older Richmond youth players, along with younger ones (it has all come together) for an undefeated season so far,” explained manager/coach Indy Dulay.
The team was originally formed back in 1979 by English immigrants who had come to Canada in their mid-20s but were no longer playing the game competitively. Four players from the original roster remain involved today — Andy Basi and back-up goalkeeper Parminder Virk are still active players, while Bob Mann and Dulay are serving as co-coach and managers.
AC Richmond went through a major transition in 2005 when a number of the original players’ sons joined the team. At one point it was quite the family affair with four dads, along with four sons and nephews all in uniform.
It was an end of an era four years later when long serving coach/manager and team leader Jaswant Mann stepped aside to spend more time with his family — passing the reigns onto Dulay and Mann.
Throughout its near four decade history, the club’s vision has remained the same.
The underlying theme of the team has always been to provide guidance on the soccer field but, more importantly, to teach youth how to become beneficial partners in the community.
“The club has focused on improving the players both on and off the field,” explained Mann. “The quality of individual developed is more valuable to us than the playing level the individual achieves. We have continued to bring players into our team from the local youth soccer system. They are nurtured by the club’s associate members (past and senior players)."
The club is also grateful for the financial support of past and current players, along with team sponsor Harry Tatla and his company Imperial Construction Ltd.
AC Richmond will look to continue its momentum in the upcoming Keith Miller Cup Provincial “B” Playdowns.