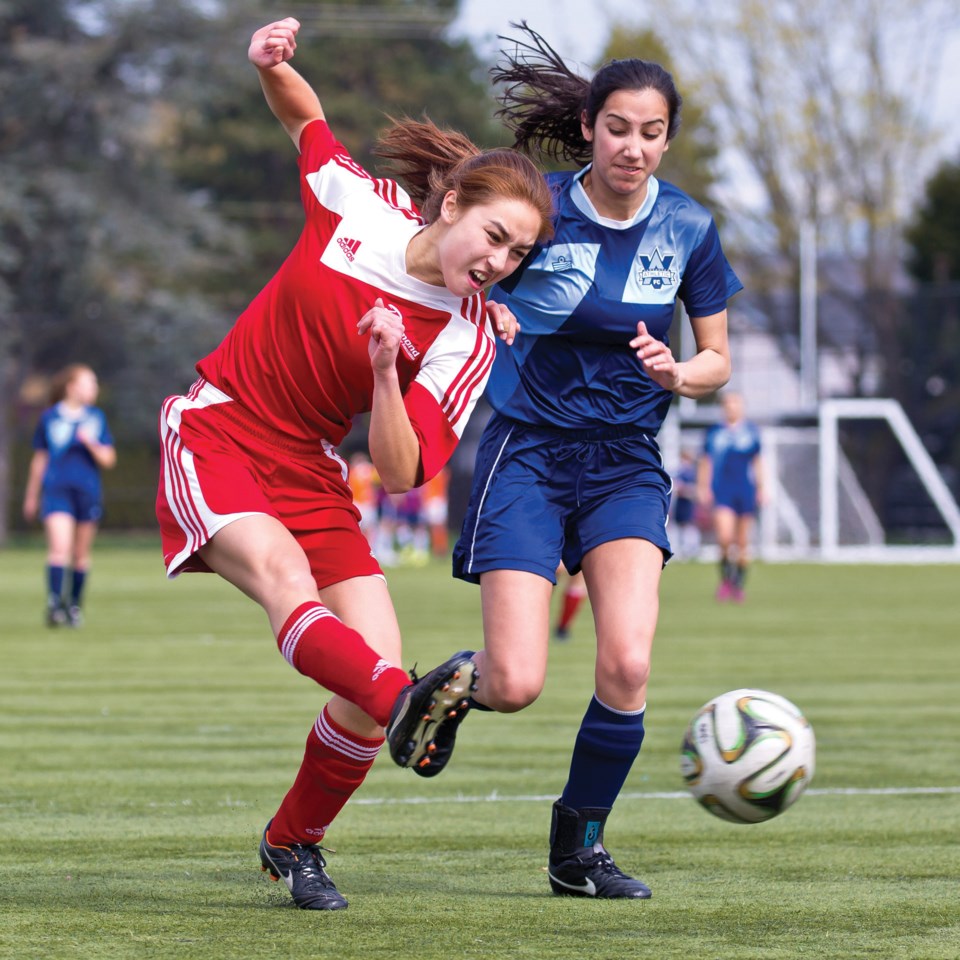 Richmond Ravens are through to the U18 Coastal “C” Cup quarter-finals after a 3-1 home field win over the Vancouver Roadrunners. The Ravens will return to Boyd on Sunday to take on the North Coquitlam Rebels at 11 a.m.Gord Goble

It will be a Richmond derby Saturday afternoon as B.C. Soccer’s 63rd annual Coastal Cup Championships reaches the quarter-final stage.
In U18 boys “A” cup action, the Richmond United 1998s and 1999s will square off 3 p.m. at Hugh Boyd.
The 98s are looking to cap off an impressive run through youth soccer in style, that includes a Coastal Cup title and Provincial Cup runner-up finish at the U16 level. Richmond narrowly missed out on a capturing the Metro Selects League championship, finishing three points back of the Burnaby Lakers, with a 5-0-2 record in the “A” flight. The 99s were at 1-2-4 but their only win came against the 98s back in late January.
The 99s have also enjoyed plenty of success over the years, winning the Coastal Cup back at U13 and finishing second a year later. They reached the semi-final stage last season at U16.
On the girls “A” Cup side, Richmond FC will be looking to continue its outstanding campaign in the U15 draw when Vancouver visits Boyd on Sunday at 3 p.m.
Richmond finished regular season play with a 13-6-3 record and was tied for top spot in the 12-team division. That included a pair of wins over Vancouver, including a 2-0 triumph back on Feb. 14.
In Coastal “B” Cup playdowns, the Richmond Ravens have advanced in the U18 girls draw with a 3-1 home field win over the Vancouver Roadrunners last week. The Ravens will be back at Boyd again this Sunday when North Coquitlam Rebels visit at 11 a.m.
Meanwhile a pair of Richmond F.C. teams remain in the hunt in the boys “B” cup playdowns.
The U13 Rangers doubled Cliff Avenue United 4-2 and will also have home field advantage when Surrey United Rangers visit Boyd on Saturday at 9 .a.m.
The U15 Athletics will be in action on the same field soon after (11:30 a.m.) in their quarter-final tilt with Killarney Phoenix. The Athletics advanced with a 3-2 win over Surrey’s Central City Breakers United.
The teams are not only battling for Coastal bragging rights but berths into the Provincial “A” and “B” Cup Championships.