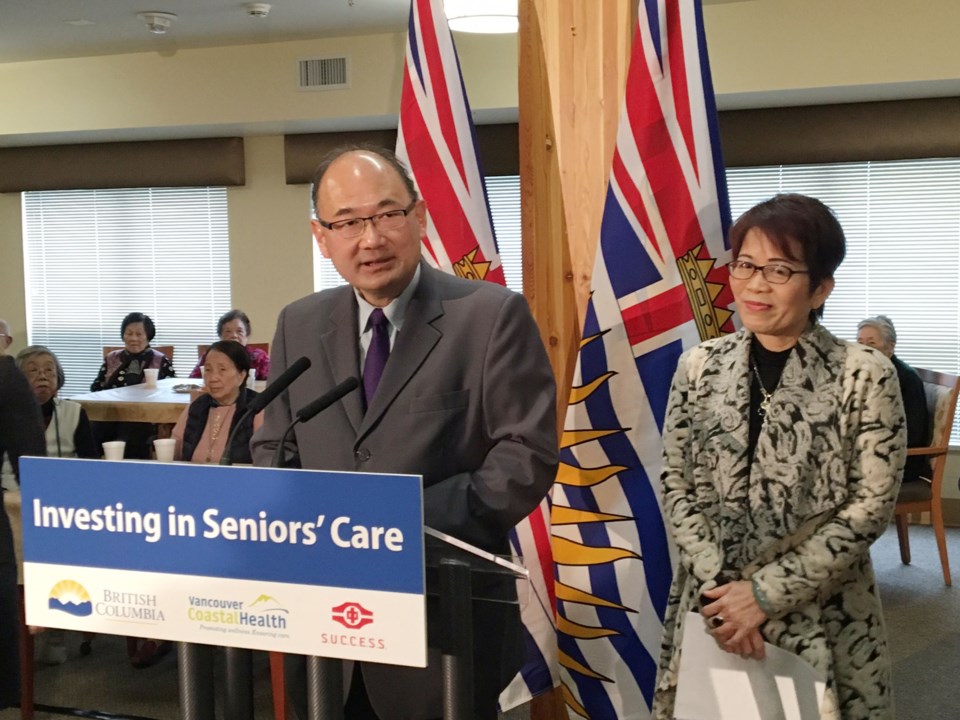 There will be more opportunities for Richmond seniors living at home to mingle with one another, thanks to the creation of 25 new adult daycare spaces at Austin Harris Residence.

Richmond-Steveston MLA John Yap announced the new spaces, to be funded from a $500 million boost to seniors care in B.C. — money sorely needed, according to healthcare workers, who have described such care, or lack thereof, to be at a “crisis” level.

The day program is said to be a key component of facilitating more “living-at-home” opportunities for seniors, seeking independence.

“Building more options for care in the community is part of our government’s strategy to change how health care is delivered in B.C. Our goal is to create an integrated system of primary care and community services that better meet the healthcare needs of all British Columbians,” said Yap.

Austin Harris Residence is operated by S.U.C.C.E.S.S, an immigrant services organization and, as such, is focused on services for immigrant seniors. Their existing adult day program has 100 seniors. The residence is renovating to add the new spaces. It will cost $520,000 to operate annually.

The program “allows caregivers and family members some respite by bringing their beloved parents to the program,” said Yap.

Seniors may attend the program twice a week, to meet new friends.

There are also 94 day program spaces at Kinsmen Adult Centre.

The need for more seniors care, such as this program, is urgent, said Jennifer Whiteside of the Hospital Employees’ Union (HEU).

Earlier this month, Health Minister Terry Lake announced $500 million in new spending for seniors care over the next four years.

The money is to be used for 1,500 new positions in residential care, according to the HEU.

This could help stem the growing number of residential care facilities in B.C. that fail to meet Ministry of Health staffing guidelines of 3.36 hours of care per senior each day. Presently, nine in ten facilities, including all five in Richmond, do not meet this threshold, according to the Office of the Seniors Advocate of B.C.

“The crisis in seniors’ care has been 15 years in the making, and won’t be solved overnight,” said Whiteside of the HEU.

Yap said he is committed to reversing this growing trend.

“We’re certainly committed to increasing support for seniors,” he told the Richmond News.

“I’m hopeful over time we will see that trend reversed. We know there’s a need to catch up in [residential care] beds in Richmond.”

Richmond will see a 135-bed residential care facility open in Hamilton, by 2019, to be operated by Trellis Group, a for-profit company, which, last year, was at the centre of a controversy on the Sunshine Coast, where the HEU and B.C. Nurses Union said the facility would reduce staff in its renovated facility.

Fraserview Lodge, a member of the Kaigo Seniors Living Group, near South Arm Park, will expand by 75 beds, by 2020.

Meanwhile, Yap repeated his commitment to rebuild Lions Manor in Steveston — although there’s no definitive timeline.

“Plans are moving to a stage where . . . in the coming months we’ll see a business plan move forward to replace Lions Manor,” which closed three years ago.

Currently, relocated seniors are living in a renovated hotel on Bridgeport Road.