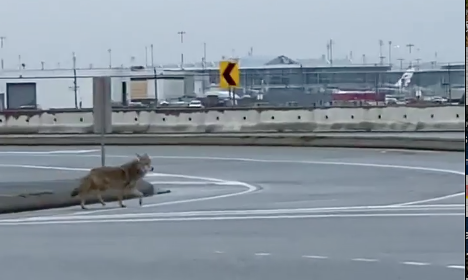 A coyote stopped at an intersection and waiting patiently for the traffic lights to turn green. Screenshot

Coyote sightings in the city are normal, even during the day. But a Richmondite recently captured an unusual video of a coyote waiting for a traffic light to cross the road near the YVR Airport.

The video posted on the Community of Richmond Facebook group shows a coyote stopped at an intersection and waiting patiently for the traffic lights to turn green.

The post created numerous comments, including “smarter than most pedestrians.”

Want to be a happier person? Richmondite shares joy of living with six cats during pandemic
Feb 5, 2021 4:00 PM