City staff have ordered workers to stop building a long fence on No. 2 Road in Steveston in front of a mega mansion.
Oct 12, 2019 8:16 PM By: Maria Rantanen 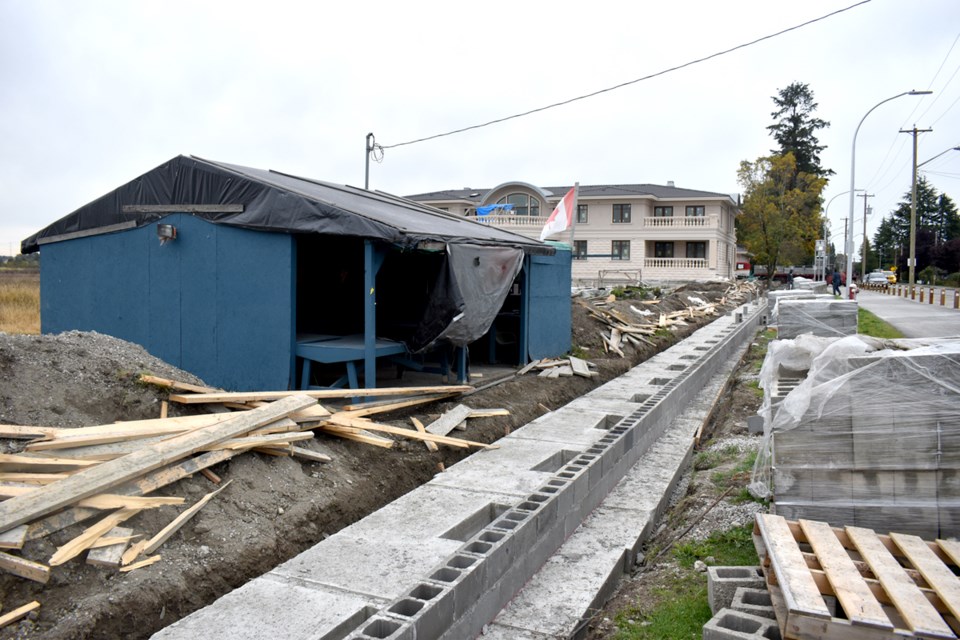 Concrete foundations have been poured for a fence fronting a mega mansion on No. 2 Road.Maria Rantanen

City staff have ordered workers to stop building a long fence on No. 2 Road in Steveston in front of a mega mansion.

Staff became aware of the “illegal construction” of the fence last week that fronted an 18,000-square-foot home on farmland, and a stop-work order was put in place on Friday, according to Clay Adams, Richmond city spokesperson. Construction of the fence, though, was on-going on Tuesday when the Richmond News went by to take photos.

City tree bylaw staff visited the site on Friday and noted the potential impact on a number of trees, and, while they hadn’t been removed, the construction work may have damaged the root system, Adams said.

“As a result, fines were issued to the property owner,” he added.

As of Tuesday afternoon, construction had halted.

City bylaws restrict this type of landscaping to be built outside of the “farm home plate” area on Agricultural Land Reserve (ALR) properties.

Photos of the concrete foundations for the fence elicited angry comments on social media from farmland advocates over the weekend.

Michelle Li tweeted photos of the concrete foundations just south of Steveston Highway as well as cinder blocks piled next to the foundations, saying every time she drives out to Steveston, it makes her yell.

Li, who is co-coordinator of Richmond Farmwatch, an advocacy group that is working to protect Richmond’s farmland, said she’s received emails from people asking her if she knows why a wall is being built. Some are worried the land won’t be farmed, others don’t want the view to farmland blocked, and still others worry the farmstand will be pushed out.

“I am personally concerned that this is blocking access to farmland and that the city’s new path along No. 2 Road is also impeding the ability for potential farmland access on some of these lots,” she explained.

She told the Richmond News that driving along No. 2 Road in Steveston makes her “distressed” because these mega-mansions were approved despite warnings that farmland would become unaffordable and the land couldn’t be farmed.

“These ostentatious mansions are continuing to be built with excessive landscaping encroaching on prime farmland,” she said. “We are seeing the framing of these final monsters that were approved under the previous council.”

On Sunday, Coun. Harold Steves tweeted that the No. 2 Road "mega fence" had been referred to the city's planning departement and the bylaw department is also looking at it. It came up at the Oct. 10 Food Security and Agricultural Advisory Committee meeting, Steves tweeted.

The mega mansion sits on a property that is 26.6 acres in size and its property taxes, according to City of Richmond data, came to $7,746.70.

Li said she thinks the previous council “underestimated our community’s connection to farmland,” and during the 2018 municipal election, farmland became an issue.

“Even this small piece of land remaining on No.2 road is a touchstone for the community, where passersby have been able to see a farm field and have access to a local farmstand, and this destruction is generating a lot of anger,” she added.

When the new council was sworn in after the November election, a house size limit of 500 square metres was introduced, but a few weeks later, it was further reduced to 400 square metres (4,306 square feet).

Adams said the city is continuing to investigate the matter.

“The wall as constructed is a serious issue and staff is now looking at options to resolving the situation through removal of the structure,” he said.