A handful of people, in support of Hong Kong protestors, set up a picket line outside city hall Friday afternoon to demand the resignation of Richmond secondary school’s principal and teachers following recent confrontations between students stemming
Dec 14, 2019 7:05 PM By: Kirsten Clarke 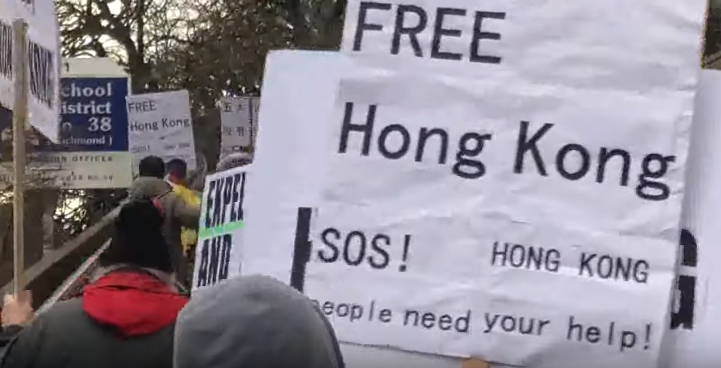 A group of people demanded the resignation of Richmond secondary's principal and teachers and protested outside city hall and the school district office on Friday following recent incidents between pro-Hong Kong and pro-China students at the school. Video screenshot@Zhenyan2014 / Twitter

A handful of people, in support of Hong Kong protestors, set up a picket line outside city hall Friday afternoon to demand the resignation of Richmond secondary school’s principal and teachers following recent confrontations between students stemming from China-Hong Kong tensions.

On Nov. 25, a letter written in Mandarin was posted on the locker of one of the school’s students – who had openly expressed support for the Hong Kong protestors – in an attempt to give him a “history lesson,” and praised the Chinese communist party.

That same day, a fight broke out between pro-Hong Kong and pro-China students, also at Richmond secondary. The fight was eventually reported to the RCMP.

Both incidents led to the school district calling a meeting with all 10 secondary school principals, as well as meetings with the students and families involved.

In a video of Friday’s protest, shared on Twitter by user @Zhenyan2014, the protesters – speaking Mandarin and translated by the Richmond News – said Richmond secondary’s principal should step down from his position.

“What the school principal has done to these pro-democracy students is unfair. These students deserve an answer from the principal,” said one of the protestors in the video, adding the principal should be responsible for solving the problems between pro-China and pro-Hong Kong students.

The protestors held up signs with such slogans as “Free Hong Kong,” “Communist Party get out of Canada,” and “Expel China’s spy students.”

They later walked from city hall to the school district office, about 300 metres away, to continue their protest.

"School administration, teachers and district staff work diligently to provide safe environments for students to live and grow, while actively managing any situation that may violate the code of conduct," said David Sadler, the school district's spokesperson, in a statement.

Sadler added that no other Richmond schools have conveyed concerns.

Tension over the months-long protests in Hong Kong has spilled over into Richmond multiple times this year.

Earlier this fall, as part of a Mandarin-language class, a teacher at Steveston-London secondary showed trailers from a Chinese government film – marking the 70th anniversary of the founding of the People’s Republic of China – which caused an uproar online.

There were also clashes between pro-Hong Kong and pro-China protesters outside Aberdeen centre after a group of Mandarin-speaking people were caught on video tearing down a Lennon Wall put up by high school students in support of Hong Kong protesters.