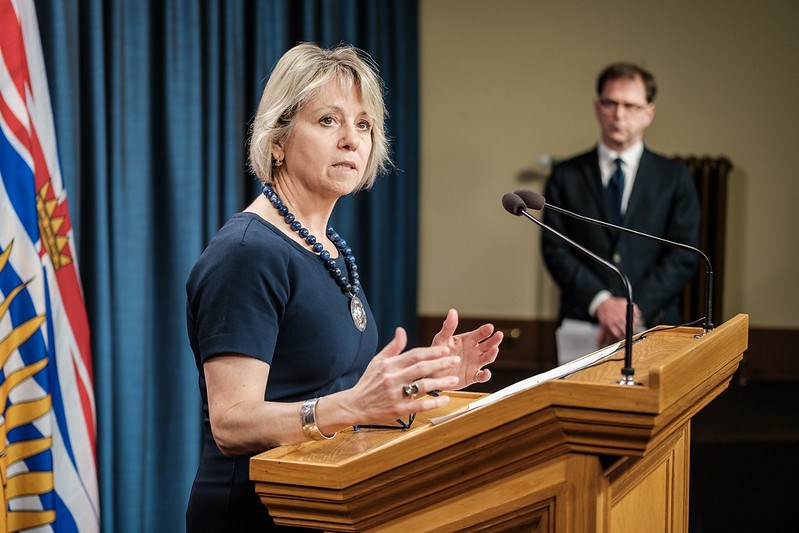 Another person in the Vancouver Coastal Health (VCH) region has died from COVID-19, as the provincial total rose to 884 Saturday as health officials reported 92 new cases.

To date, 17 people have died from the coronavirus in B.C.

There are now 81 patients in hospital, 52 of whom are in ICU, said provincial health officer Dr. Bonnie Henry.

Health Minister Adrian Dix said that, of the patients in hospital, 31 are in the VCH region, 39 in Fraser Health, six in Interior Health, three in Island Health and two in Northern Health.

Twelve long-term care homes in B.C. have at least one staff member or resident that has tested positive for B.C. Six of the care homes are in the VCH region, and six in Fraser Health. All of those care homes are under outbreak protocol.

Of the total cases, 396 people, or 45 per cent of cases, have recovered, said Henry.

The province's recovery rate is quite high, she said, for a couple of reasons. The first is that B.C. started getting more cases earlier on due to outbreaks in long-term care facilities, which infected young, healthy healthcare workers.

"So they had a milder disease that didn't last long," she said.

The province also changed its criteria, which has been agreed upon at the national level, on when to consider a person recovered from a mild form of COVID-19.

B.C. now considers people recovered who have not shown symptoms, such as fever, for 10 days, said Henry, which is why officials no longer need to have two negative lab tests.

The method has also been validated around the world, such as in Germany, Henry added.

There has been "extraordinary goodwill and compassion and care" in B.C.'s communities, said Henry, which is what will help British Columbians get through the coronavirus epidemic.

The measures introduced over the last few weeks are designed to prevent transmission of more cases, she said.

"Any severe outbreak or cluster of cases is going to tip the scales for us," said Henry. "We're at that very critical point right now. We need to continue this action. Together, we must stay apart with our physical distancing...We must be united and 100-per-cent committed until we flatten this curve for good.

Now more than ever, we need you to keep this up."

Henry said she appreciates everything that British Columbians are doing right now to fight the spread of the coronavirus, saying those actions are what "is going keep us going."

On Friday, Henry presented the province's current epidemiological modelling of COVID-19, which shows how social, or physical, distancing measures may have helped lessen the spread of the virus in B.C.

But Henry cautioned that it's not possible to know when B.C. has reached the peak of its epidemic until after it has passed.

"We don't know the peak until we are looking back at it," she said. "So, none of this (modelling) is able to let us know if we've reached the peak or not. We need to continue to monitor and follow everything on a daily basis to see if we are flattening that curve.

But really, the only way to tell is in retrospect."

"We have to of course prepare for the worst," said Dix. "Not because we think the worst will happen, but because we have to be prepared for our acute care system. We have to be there for our doctors and nurses and our healthcare workers."

Dix also reiterated the need for British Columbians to be "all-in" in following the physical distancing measures put in place by Henry.

B.C. currently isn't testing asymptomatic people, except those in close contact with long-term care homes, said Henry, explaining that right now it's important for the province to focus testing on active outbreaks and the healthcare system, to be able to trace chains of transmission in the community.

However, broad testing of asymptomatic people won't happen until B.C. starts to flatten the curve of COVID-19, said Henry.

"That is the strategy we will be looking at if, and when, we come to the downside of our curve, when we're looking again at introductions coming into B.C. from other places," she said.

Provincial closures need to be strategic

Henry addressed B.C.'s response to COVID-19, noting she many have said the province should lockdown, as is happening in other places such as New York or Italy.

"We have talked a number of times about how we're doing things here in British Columbia, and how it's very similar to what others are calling a lockdown," said Henry. "We have done that in a more strategic way, or we tried to do it in a very thoughtful, purposeful way, rather than having blanket restrictions on certain things."

Henry cited the example of school closures, and said the province needed to ensure it had supports in place for essential workers, such as people who work in health care or in grocery stores.

"We need to have the ability to care for their children," she said. "And that's what our school districts are working on."

B.C. also needs to make sure it has support in place for children who are most disadvantaged by the closure of schools, said Henry, who may have the most challenge in terms of bouncing back from an extended closure.

In addition, she said, B.C.'s measures are in place to try to reduce exposure of the virus to people most at risk and impose physical distancing in all of the places it can to try to minimize transmission.