Tensions escalate between China and Canada after Huawei boss arrest

Foreign minister warns Canada of possible consequences unless Wanzhou Meng is freed, following her detention at YVR
Dec 9, 2018 10:31 AM By: Richmond News 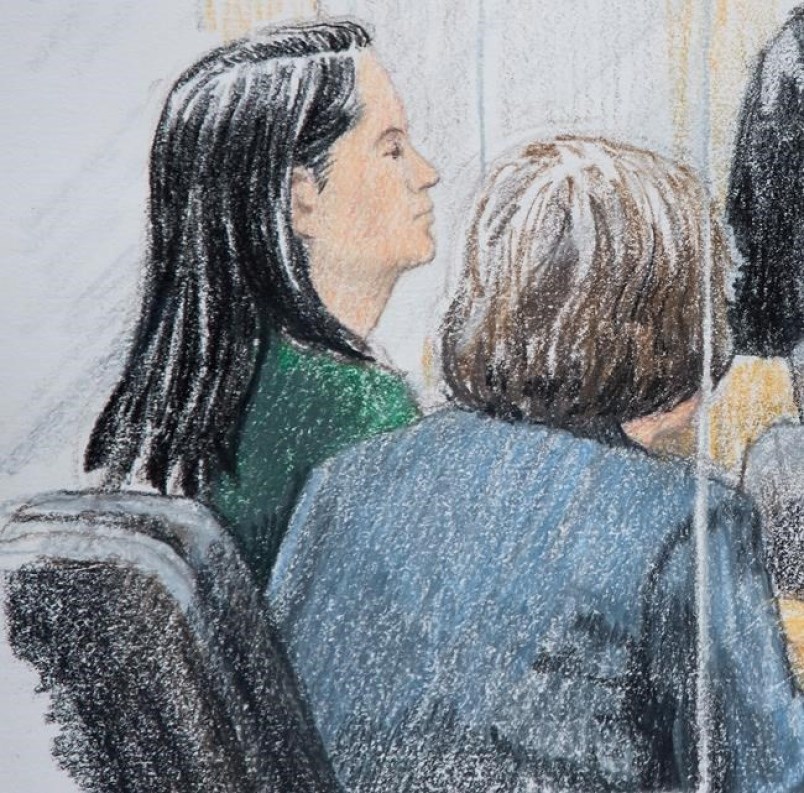 In this courtroom sketch, Meng Wanzhou, left, the chief financial officer of Huawei Technologies, sits beside a translator during a bail hearing at B.C. Supreme Court in Vancouver, on Friday December 7, 2018. She was arrested Saturday after an extradition request from the United States while in transit at the city's airport. THE CANADIAN PRESS/Jane Wolsak

Tensions are escalating between Canada and China after the arrest last week and possible extradition to the U.S. of Huawei chief financial officer Wanzhou Meng.

Yesterday, China summoned the Canadian ambassador to protest the detention of Meng, the daughter of the communications giant founder, calling it "unreasonable, unconscionable, and vile in nature.”

Furthermore, there was a warning of "grave consequences" if she is not released.

A statement on the Chinese Foreign Ministry's website said that Vice Foreign Minister Le Yucheng called in Ambassador John McCallum on Saturday over the holding of Meng, who is reportedly suspected of trying to evade U.S. trade curbs on Iran and is wanted by U.S. officials.

Le told McCallum that Meng's detention at the request of the U.S - while she was transferring flights at YVR - was a "severe violation" of her "legitimate rights and interests."

"Such a move ignores the law and is unreasonable, unconscionable, and vile in nature," Le said in the statement.

The Richmond News was one of the first in the world to report Wednesday how Meng was arrested last Saturday at YVR.

She had a bail hearing at BC Supreme Court on Friday, where a prosecutor for Canada, on behalf of the U.S., argued that Meng should not be granted bail and is a “flight risk,” given her family’s immense wealth.

Canadian prosecutor John Gibb-Carsley said in court that a warrant had been issued for Meng's arrest in New York Aug. 22.

He said Meng, arrested en route to Mexico from Hong Kong, was aware of the investigation and had been avoiding the United States for months, even though her teenage son goes to school in Boston.

Gibb-Carsley alleged that Huawei had done business in Iran through a Hong Kong company called Skycom.

Meng, he said, had misled U.S. banks into thinking that Huawei and Skycom were separate when, in fact, "Skycom was Huawei."

Meng has contended that Huawei sold Skycom in 2009.

In urging the court to reject Meng's bail request, Gibb-Carsley said the Huawei executive had vast resources and a strong incentive to bolt: She's facing fraud charges in the United States that could put her in prison for 30 years.

During the six-hour hearing, a lawyer for Meng told the court how his client’s wealth should not be a factor in whether or not she is freed.

The hearing will resume Monday after Meng spends the weekend in jail.

Huawei is the biggest global supplier of network gear for phone and internet companies and has been the target of deepening U.S. security concerns over its ties to the Chinese government.

The U.S. has pressured European countries and other allies to limit use of its technology, warning they could be opening themselves up to surveillance and theft of information.

Canada is one of the few remaining Western nations to apparently ignore those warnings and has openly courted the company to do business here, including in B.C. and Richmond, with MLA Teresa Wat having close ties with the tech giant.

"Perhaps because the Chinese state controls its judicial system, Beijing sometimes has difficulty understanding or believing that courts can be independent in a rule-of-law country. There's no point in pressuring the Canadian government.

Judges will decide," Paris tweeted in response to the comments from Beijing.

U.S. Sen. Ben Sasse, a Republican member of the Senate armed services and banking committees, applauded Canada for the arrest.

The U.S. alleges that Huawei used a Hong Kong shell company to sell equipment in Iran in violation of U.S. sanctions.

It also says that Meng and Huawei misled American banks about its business dealings in Iran.

The surprise arrest raises doubts about whether the trade truce will hold and whether the world's two biggest economies can resolve the complicated issues that divide them.

Huawei told the Richmond News last Wednesday that it has “every confidence that the Canadian and U.S. legal systems will reach the right conclusion."

Canadian officials have declined to comment on Chinese threats of retaliation over the case, instead emphasizing the independence of Canada's judiciary along with the importance of Ottawa's relationship with Beijing.

Foreign Affairs Minister Chrystia Freeland said Canada "has assured China that due process is absolutely being followed in Canada, that consular access for China to Ms. Meng will absolutely be provided."

"We are a rule of law country and we will be following our laws as we have thus far in this matter and as we will continue to do," Freeland said Friday.

While protesting what it calls Canada's violation of Meng's human rights, China's ruling Communist Party stands accused of mass incarcerations of its Muslim minority without due process, locking up those exercising their right to free speech and refusing to allow foreign citizens to leave the country in order to bring pressure on their relatives accused of financial crimes. The party also takes the lead in prosecutions of those accused of corruption or other crimes in a highly opaque process, without supervision from the court system or independent bodies.

With files from the Associated Press and Canadian Press