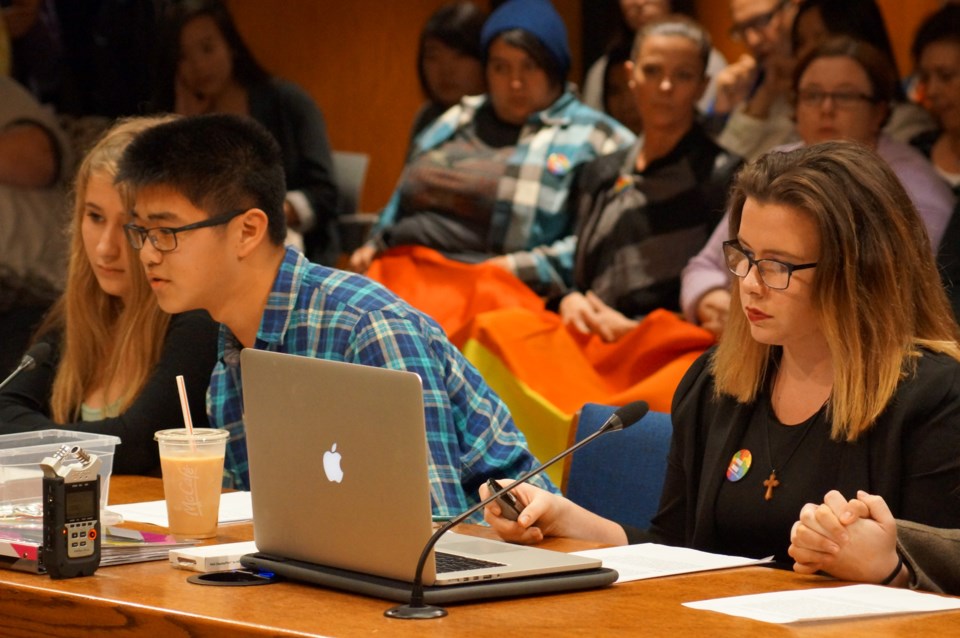 Students from Steveston-London secondary’s Rainbow Club addressed Richmond’s Board of Education Monday night, asking the school district to fall into line with the majority of those in B.C. and institute an anti-discrimination policy for lesbian, gay, transgender and questioning youth. Photo by Graeme Wood/Richmond News

Members of Steveston-London secondary school’s Rainbow Club pulled no punches when addressing the Richmond Board of Education Monday night to ask for an anti-discrimination policy that specifically protects and acknowledges the rights of gender and sexual minority students.

“Richmond schools are still behind when it comes to the acceptance of LGBTQ+ students. Discriminatory slurs such as homo, faggot and tranny are all too common,” said student Alyssa Osten.

Citing studies that indicate LGBTQ (lesbian, gay, transgender and questioning) youth face higher rates of self-harm and suicide than others, the club asked the board to develop a policy that goes beyond the Ministry of Education’s recent directive to all school districts to include LGBTQ students in its anti-bullying policies.

To date, the Richmond School District has relied on the B.C. Human Rights Code to address discrimination. It was only in July that the provincial government amended the code to include gender identity and expression as prohibited grounds of discrimination.

Faced with the club’s petition of nearly 1,100 signatures, the board voted unanimously to develop such a policy, becoming one of the last districts to do so in B.C.

The students presented board chair Debbie Tablotney with the petition signed by students, teachers and community members, including Couns. Derek Dang and Bill McNulty and Richmond-Steveston MLA John Yap.

Also backing their cause was Glen Hansman, president of the B.C. Teachers’ Federation.

Yet, among the club’s key concerns was an alleged lack of understanding amongst some teachers in the district concerning such rights.

The club’s Grade 12 president, Nathan Lee, said there are many instances that highlight the problem. In fact, he points to one situation in which he claims a substitute teacher suggested LGBTQ club members look into conversion therapy.

“One of the reasons we’re asking for a (separate) anti-homophobia policy is for professional education for teachers” in the district, said Lee.

The Richmond News asked the district about the conversion therapy incident. It made no indication whether or not such therapy is acceptable, but it did acknowledge that a student has made this complaint and human resources is looking into the matter. Tablotney said she personally disagrees with the concept, which attempts to change a person’s sexual orientation and is espoused by some religious fundamentalists.

Richmond Teachers’ Association president Al Klassen said, “I’m pretty sure none of our teachers would go down that road,” adding such an incident would likely be a misunderstanding.

Lee told the News the teacher told students to go online and explore the work of Joe Dallas, a prominent American conversion therapy advocate. Lee said, when he brought the matter to the attention of administrators, he was told to not speak about it — something he sees as further proof of the district’s broader lack of understanding of the issues.

“Many (students) already struggle with unaccepting homes and if schools aren’t a safe place for them, where else are they going to go?” asked Lee, who believes Richmond’s socially conservative culture has shaped board policy.

An active member within the Chinese Christian community, trustee Jonathan Ho said he supports the students’ rights, but acknowledged the board has received opposition from such parents concerned about “traditional values” and “parents’ rights.”

Tablotney said delays in drafting a policy were due to the 2014 election (to include new trustees) and subsequent work elsewhere, such as replacing a retiring superintendent and the school closures process. She maintained the matter was being discussed. Trustee Sandra Nixon apologized to the students for the delays.

This year, the Faculty of Education at the University of B.C. introduced programming to implement “inclusive” education of sexual orientation and gender identity.