Rita Jin is pursuing her passion for learning – not just padding her resume.
May 1, 2020 2:56 PM By: Maria Rantanen 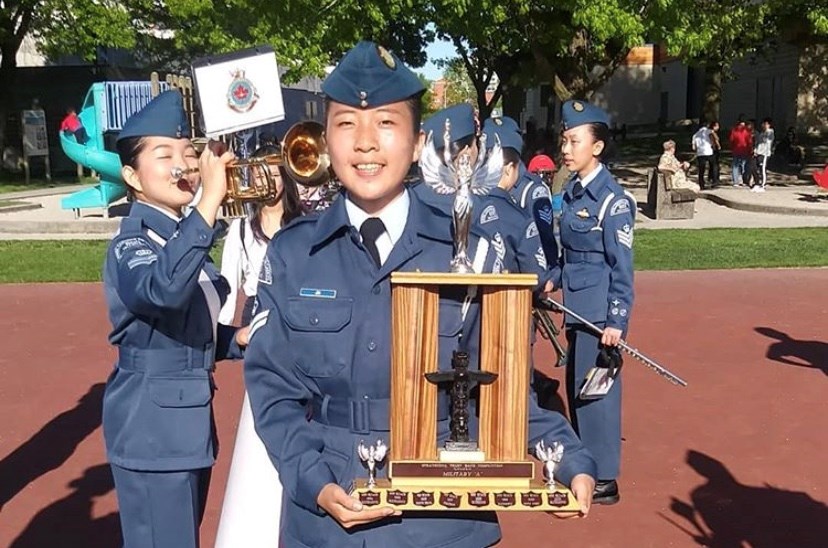 Rita Jin is in the Royal Canadian Air Cadets.Photo submitted

Rita Jin is pursuing her passion for learning – not just padding her resume.

The Grade 12 student will be going to UBC this fall to study sciences, and she thinks her wide range of interests and her thirst for knowledge for its own sake are the reasons why she was awarded an $80,000 Schulich scholarship.

The Schulich scholarship is given to students who are innovators and think outside the box, Jin explained.

Her interests range from sciences, humanities, environmental issues, sports, cadets and volunteering. She focused her application essay on both the scientific and personal aspects of her work with organizations that support autistic children – this crossroads of science and human interest was what she thinks made an impression in her application.

“I didn’t have one specific thing that I was extremely, extremely focused on, but I had big areas that I knew wanted to do something in,” she said.

Jin said there’s a lot of pressure on high school students to maintain high grades, to be involved and “pad your resumes.”

“I was a very involved student but I never looked to them as activities to put on my resume,” she said. It’s more about finding what you like to do, which motivates learning, she added.

Jin will be studying sciences at UBC this fall in a group of 10 Schulich scholars – five in sciences and five in engineering. Across Canada, only 100 students were chosen for the Schulich Leader Award out of more than 300,000 applications.

She hopes her time at UBC will let her explore the sciences, but she doesn’t have a specific career goal in mind yet.

“I am hoping to be a curious learner, see where life leads me and obviously do my best to offer something valuable to the world around me,” Jin said.

Jin partly attributes her success to her supportive parents who let her try things and didn’t push her into areas she wasn’t interested in.

Growing up in an immigrant family, she’s heard horror stories from other children of immigrants who were forced to do activities they didn’t want to.

But her parents always let her decide what she would be involved in.

“They understand that you have to let the child discover their path on their own,” she said. “They’ve always been encouraging - they suggest activities I might like, but in the end, it’s always me who chooses whether I want to pursue it.”

Jin is a member of the Royal Canadian Air Cadets – and has flown a glider - she is a Bronze Cross swimmer and plays the piano and trumpet.

She is also grateful for the support she’s received from her high school principal and other teachers who have encouraged her along her path of learning.

Jin, who has been at Richmond Secondary since Grade 10, completed the International Baccalaureate program as well as doing advanced placement (AP) courses, maintaining a 90-per-cent average.

“Rita is a genuinely curious and open-minded learner who tackles difficult courses because she sees value in learning and in challenging herself,” said her principal, Jim Allison.

He called Jin a “remarkably well-rounded” student, genuine and well-respected by her teachers and peers.

At school, she’s played volleyball, is on the science team, a member of the Green Team and is vice-president of the student council.

“She has been a fantastic Richmond Colt and we are very proud of her and know she will continue to do well in sciences at UBC and in her bright future,” said Allison.