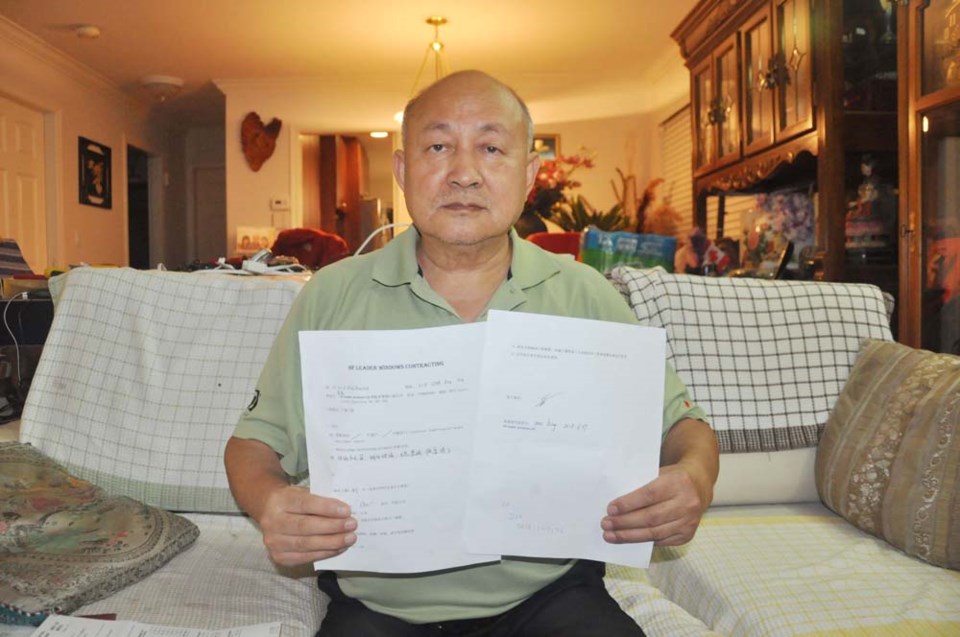 Hongwei Zhao is one of 17 residents in Metro Vancouver who claim to be the victim of a renovation scammer on WeChat. Zhao shows the contract signed by him and the "renovator" who ran away after receiving the deposit. Daisy Xiong photo

Seventeen residents in Metro Vancouver, including four from Richmond, have claimed that they were scammed by a man who offers renovation services on the Chinese-speaking messaging app WeChat only to vanish after receiving the deposit.

Richmond RCMP said it has received a complaint on the case and is currently investigating.

“At this point, there may or may not be anything to suggest any criminal wrongdoing has occurred. Should we encounter more evidence to the contrary, our response will be to follow the evidence,” Richmond RCMP spokesperson Dennis Hwang told the Richmond News.

“There are civil solutions for contract related matters and for when services are not provided.”

Hongwei Zhao wanted to build a sunroom on his balcony in June and met a man through a WeChat group, which connects local renovation providers and people needing these services.

“Many people look for services on WeChat and there are different groups for different services,” said Zhao.

The man said he is a renovator and could build the room for Zhao at a competitive price. They then met and signed a contract and Zhao paid a $2850 cash deposit, which is 50 per cent of the total cost of the project.

However, the “renovator,” who showed Zhao his permanent residency card when they met, disappeared afterwards. Zhao later found that the company stated in the contract does not belong to the man.

Richmond resident Anna Wong was another ‘victim.’ She also met the renovator on a WeChat group in spring and hired him to renovate her home.

"After he received the money, I never saw him again,” said Wong.

Now the number of victims has reached 17, according to Zhao, and the number keeps growing, with individual losses ranging from $400 to more than $100,000.

“Some called the police but were told it is a civil case,” said Zhao.

“The man is ‘clever.’ He always signs a contract so it looks like a civil dispute rather than a scam.

"And he only takes cash so there is no way to trace the money.”

Zhao said for many people who lost thousands of dollars, it might be more expensive to hire a lawyer to sue him, and “he obviously knows that.

"But we have to stop him from cashing in on residents without being held responsible, and we hope to warn people not to fall into the same trap as us.”

Simone Lis, vice president of the Better Business Bureau‎ (BBB), said "shady contractors" who take deposits and then disappear is one of the top 10 renovation scams in 2017 with more than $3 million being reported lost.

“We always advise consumers to do enough research before handing out money and not to give cash because then the money is not traceable,” said Lis.

“They need to find out if he is who he says he is on social media, if his company is properly licensed and has a good reputation, if the person is associated with the company, and if he has WorkSafe insurance."

Lis added that the deposit is usually 10 or 15 per cent, and if consumers are asked for more, they should find out what the money will be used for.

"Claiming the money back after the fact is very challenging because consumers have to firstly find the individual and then likely sue the individual through court," she said.

"And if someone doesn't have the money, even if you take them to court, it’s very difficult to force them to pay."

Steven Yu, another victim who lost his deposit to the same “renovator” last year, after hiring him to renovate a house in Richmond, said the rise of WeChat communities gives criminals the chance to go gold-digging.

“There are a lot of groups on WeChat providing services and information, such as moving, rental, renovation, gardening and cooking. It’s very convenient and I found most of them are trustworthy,” said Yu, who is in more than 100 WeChat groups.

"But not all of them are honest and reliable. For example, some people exchange currencies with each other through WeChat groups, but I know someone who never got their money back."

Nevertheless, Yu still thinks that most people are genuinely offering good services on WeChat, and he “will continue to use this platform.”

Zhao, however, said it will be very difficult for him to trust service providers on WeChat or other social media moving forward.