Richmond resident given second extension to clean up property 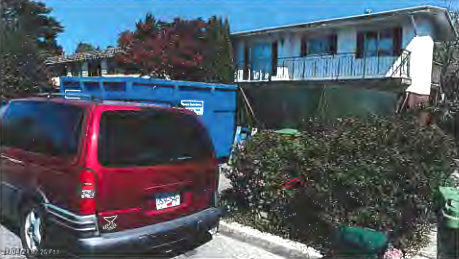 A property in the South Arm area has been ordered to be cleaned up.City of Richmond photo

The chances of getting another extension to clean up his mother’s property are “slim to none,” Richmond Mayor Malcolm Brodie told a Richmond resident.

Edward Wong had appealed a cleanup order on his mother’s property in the South Arm area in June, and was given a month to remove garbage containers, derelict vehicles and other debris from around the house.

On Monday, he asked for another extension and was allowed until Sept. 20 to get the job done.

“You’ve asked for time, we’ve been more than generous giving you time,” Brodie told Wong at the meeting. “You need to get the unsightly premises cleaned up.”

Wong told the Richmond News the heat has hindered his cleanup efforts, but he is determined to get rid of the bins over the next month.

“I’m sure (council is) understanding about it,” he said.

The property has been the subject of numerous complaints over the years, but the most recent cleanup order was given in November 2019, after which time Wong did some cleanup.

In April, however, city staff asked council to approve them going in to clean it up and bill the owner, which Wong then appealed.

At Monday’s meeting, Coun. Carol Day questioned why there were three uninsured vehicles on the property, while only one is allowed.

Coun. Andy Hobbs said his concerns are fire, health and safety risks as well as the neighbourhood and neighbours.

At the June hearing, Carli Williams, manager of bylaws, told council there had been “substantial progress” in the cleanup, but at that point there were still pallets, garbage, derelict vehicles and a container in the front yard that needed to be dealt with.

However, there were still boxes that were of concern to Williams on Monday, and she planned to ask the fire department to check for fire hazards.

Hobbs and Coun. Linda McPhail voted against giving the extension.