Richmond RCMP is still trying to find a Richmond senior who has been missing for 24 days. Feng Qin Zhou, 75, has Alzheimer’s and was last seen by family on Nov. 20, although there have been numerous reported sightings – some as recently as this week.
Dec 13, 2019 12:49 PM By: Nono Shen 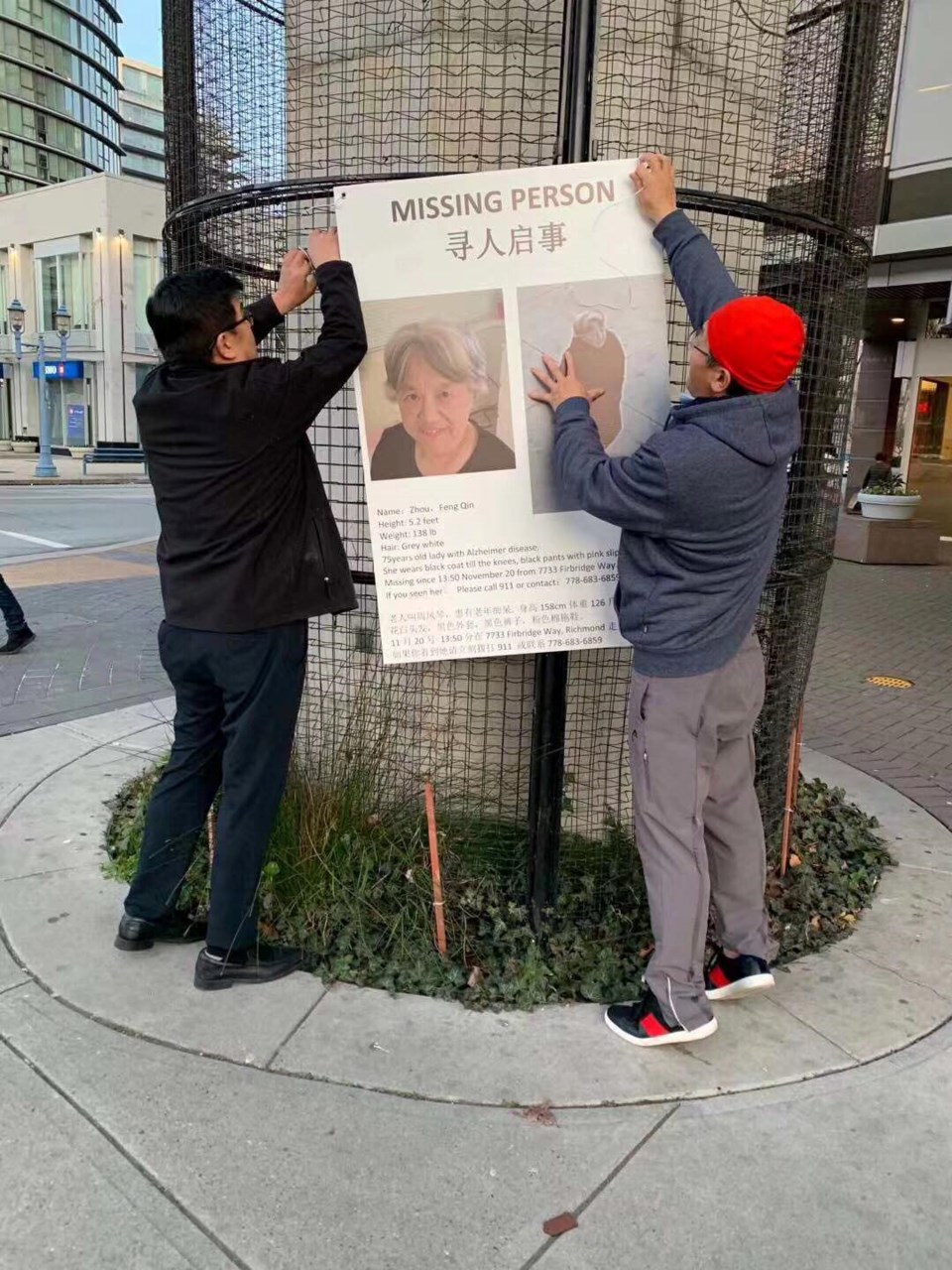 Volunteers put up posters of the missing woman near a Canada Line station in Richmond. Photo submitted

Richmond RCMP is still trying to find a Richmond senior who has been missing for 24 days.

Feng Qin Zhou, 75, has Alzheimer’s and was last seen by family on Nov. 20, although there have been numerous reported sightings – some as recently as this week.

Richmond RCMP spokesperson Cpl. Dennis Hwang said the police are still actively searching for the woman. They have received a number of tips, some of which have been helpful, he said, however many have not been accurate. Regardless, he added, police follow up on all tips.

On Nov. 23, about 500 people set up a group on the Chinese social media platform WeChat to organize daily search parties. They shared locations and photos to help search for Zhou.

However, Caryn Zhang, the volunteer group organizer, has since called off doing any more searches for the time being.

“We have spent three weeks looking for Zhou, and we have never given up on any clues...But now we hope the family member will tell us if she/he still wants us to continue our work or not,” Zhang said in a Dec. 12 statement on WeChat.

“If the police and the family member need our assistance, we are more than happy to help. However, we won’t organize any search party for now.”

The statement added that Zhou’s family member refused to accept interviews from media to spread the word about Zhou missing.

Meanwhile, Zhou’s story has been a hot topic in the local Chinese community; some Chinese Youtubers even made a series of videos to discuss the case.

Jeff Jiang, a member of the volunteer group, has been invited as a guest speaker to talk about his volunteering experience on one of these Youtube shows.

Jiang told the Richmond News that he understands the organizer’s decision to stop searching for now. As far as he knows, volunteers donated thousands of hours looking for the missing woman.

“It’s heart breaking to know that a senior has been missing for so long. Lots of volunteers told me, although Zhou isn’t their mother, they are still deeply concerned about the senior’s safety and health conditions,” said Jiang, adding that they hope to hear good news about Zhou soon.

The police are asking if anyone has information about Zhou or her location, to contact the Richmond RCMP.