Members of the Az-Zahraa Islamic Centre on No. 5 Road are expressing their grief and are calling for politicians to take swift action
Jun 9, 2021 9:40 AM By: Alan Campbell 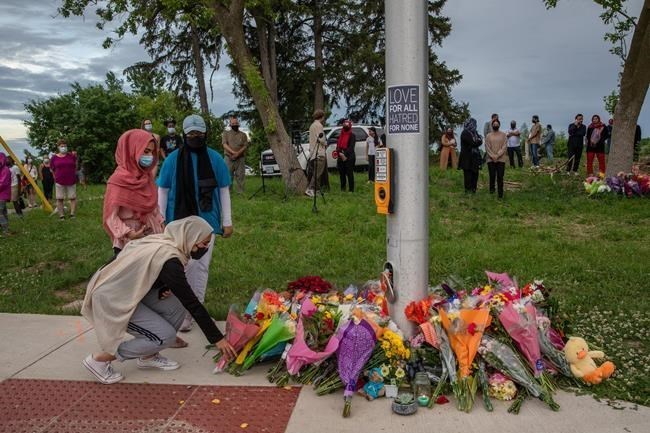 One of the many roadside tributes being laid in London, Ont. for the Muslim family mowed down and killed on SundayFacebook photo

Richmond’s Muslim community is reacting to the atrocity in London, Ont. that all but wiped out an entire family who were only out for walk Sunday evening.

Members of the Az-Zahraa Islamic Centre, at No. 5 and Blundell roads, have been expressing their profound grief in the wake of the apparent targeted, Islamophobic attack on a sidewalk by a man driving a truck.

Make-shift memorials have popped up all over the country for the family members brutally killed - Salman Afzaal, 46, his wife Madiha Salman, 44, their 15-year-old daughter Yumna Afzaal and Salman Afzaal's, 74-year-old mother.

The youngest member of the family, Fayez, 9, survived and remains in hospital in serious condition.

Police believe their deaths were motivated by anti-Muslim hate, adding that the driver of the truck, who was arrested about 10 minutes from the scene the same evening, planned the attack and targeted the family because of their faith.

“It is with heavy hearts that we extend this statement on the horrific, targeted murder of a Muslim family in London, Ontario. Our prayers go out to the entire Muslim community, and in particular, to nine-year-old Fayez Salman, whose family was killed in this Islamophobic attack,” read the statement issued by Az-Zahraa’s PR director Mahmood Jaffer.

“We pray for his quick and full recovery from the injuries he sustained in the attack.”

Jaffer’s statement went on to say that Muslims in Canada are “well aware of the deep-seated anti-Muslim racism and white supremacy in this country that fuels such attacks, including the Quebec City mosque shooting, the stabbing of a mosque caretaker in Toronto, and attacks against Muslim women in Alberta and across the country.

“These sentiments are further incited by the legislation and policies of our federal and provincial governments, as observed in Quebec's Bill 21 banning religious symbols and the many MPs who opposed the anti-Islamophobia motion M-103.

“While we continue to grieve the lives that have been taken from us, we remain resolved to continue practicing our faith despite attempts to raise fear and unrest within the Muslim community.”

Az-Zahraa then called upon elected officials and “community allies to take action to address the causes of systemic anti-Muslim racism, Islamophobia, and all forms of injustice against Muslims.”

Letters: Troubling views fuel racism in Richmond
May 1, 2021 9:57 AM
Comments