Chinese investors claim Joe Peschisolido didn't do his duty as a lawyer while his firm represented an immigration consultant
Sep 30, 2016 10:59 AM By: Sam Cooper/The Province 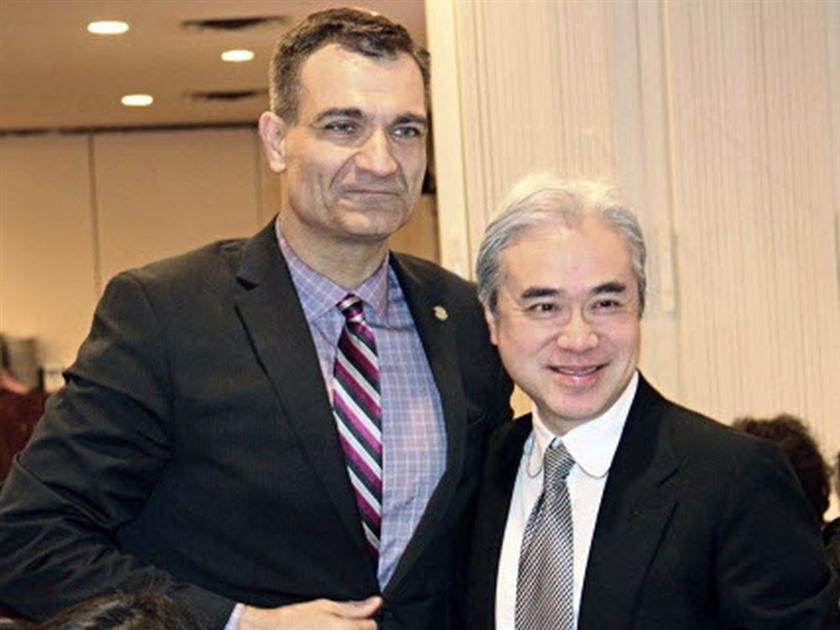 Steveston-Richmond East MP Joe Peschisolido (left) with Paul Oei, who has been accused of fraud by the B.C. Securities Commission.

Steveston-Richmond East MP Joe Peschisolido has been named in lawsuits filed by three Chinese immigrant investors, who allege he allowed money submitted to him in a legal trust to be wrongfully taken by a Vancouver immigration consultant accused of a $6.9 million fraud scheme.

Paul Oei was accused of the fraud on Monday by the B.C. Securities Commission.

The substance of the allegations against Peschisolido and his firm predate his election to Parliament in 2015.

Oei and his wife, Loretta Lai, who are clients of Peschisolido’s Richmond law firm, are active in federal and provincial Liberal fundraising circles. Oei and Peschisolido have been photographed together at multiple political events and fundraisers.

The Commission has accused Oei of using a number of companies to “perpetrate a fraudulent scheme” to bilk investors. The agency alleges investors who kicked in a total of $13.3 million were told they would become shareholders in a Fraser Valley recycling plant, but that $6.9 million was diverted for Oei’s personal spending including expenses for Canadian Manu, an immigration and financial planning company run by Oei and also named in the scheme.

In three separate B.C. Supreme Court civil cases, immigrant investors who allege they lost money to Oei claim they were instructed to submit their investment money to a legal trust controlled by Peschisolido and his firm. In statements of claim filed in B.C. Supreme Court, the investors allege Peschisolido failed in his duty to ensure the trust money was directed to their promised investments.

None of the allegations in the lawsuits nor the B.C. Securities Commission accusations have been tested in court.

The lawsuits claim Peschisolido, as a lawyer, is responsible because funds meant to be transferred from his firm’s legal trust to recycling plant investments went to Oei’s personal use instead.

And a claim from a plaintiff named Bao Xi Yang alleges: “The scheme of Oei and Lai and acting through Canadian Manu Immigration and Cascade was fraudulent, and would not have succeeded but for the assistance they received from Peschisolido and (Peschisolido’s law firm) … who received and disbursed Mr. Yang’s funds to Canadian Manu Immigration, well knowing that there had been no instruction to do so and that no shares or interest had been issued or conveyed.”

In an interview Wednesday, Peschisolido said that it is common for law firms to be targeted in litigation, and that he could not comment on any of the allegations made in legal filings. Peschisolido said the security commission allegations against Oei do not involve him, and he can’t comment. He said that he would not disclose whether he has a relationship with Oei and Lai outside of his firm’s business.

“They were not my clients, they were the firm’s clients, and the courts will do what the courts do,” Peschisolido said.

Common themes and allegations in these lawsuits are that Oei and his wife told Chinese investors the B.C. government fully supported the recycling plant projects the couple was raising money for, and that by investing in the projects they would be able to obtain Canadian resident status through B.C.’s provincial nominee program.

Elections records show that Oei and Lai have donated $8,477 to the federal Liberal party since 2014.

Postmedia asked whether Oei has donated funds directly to Peschisolido, or his riding association.

“I don’t know, but I believe the party is looking into that, but I don’t believe so,” Peschisolido said.

Peschisolido did not deny that he has been seen and photographed with Oei at multiple political and charity fundraisers.

“Absolutely, I meet with folks all the time,” Peschisolido said. “If you have said there are pictures of me with Mr. Oei, obviously I’ve taken a picture with Mr. Oei. I take pictures with a whole lot of folks at fundraisers, at community events, at breakfasts. That is what MPs do.”

In one case, plaintiff Yicheng Jiang says he is a resident of China who met Oei and Lai on a visit to Canada in 2009.

In his statement of claim, he alleges the couple pitched him on a Maple Ridge fertilizer plant investment for a company named Cascade, and led him to believe an investment of at least $1 million would qualify for a B.C. provincial nominee program application, and investors would be “granted status as a Canadian permanent resident within six months.”

In the court documents, Jiang alleges Oei and Lai induced him to send investment funds to Canada and to introduce them to at least six more citizens in China who would also transfer funds to Canada, to invest in Cascade. In total, Jiang says, he sent $3.99 million to Canada for himself and the six other investors. These funds were wired by Jiang to an HSBC Bank of Canada account controlled by Peschisolido’s law firm, Jiang’s claim alleges.

Jiang claims the funds were wrongfully transferred from the legal trust of Peschisolido’s firm to Oei, and that he and the other Chinese investors have lost their money.

Jiang also alleges that, in 2013, Loretta Lai informed him that Cascade was going bankrupt, and “the cause of the bankruptcy was corrupt Caucasian members of the board.”

In an interview, Peschisolido said he could not answer allegations made in Jiang’s legal filings.

The firm said it acted for Oei, Lai, and Canadian Manu Immigration, “and are not at liberty to disclose any information or documents which are covered by solicitor-client privilege.”

The firm said “to the best knowledge of these defendants the money advanced by the plaintiffs was not misused by Paul Oei or any of the defendants.”