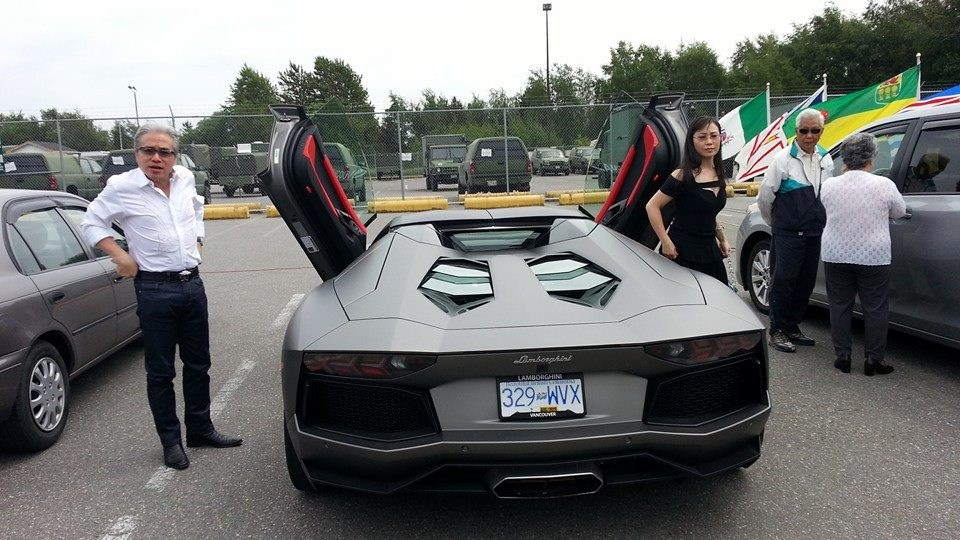 Richmond fraudster Paul Oei gets out of a lamborghini with his wife, left, Loretta Lai, at the Sherman Armoury in Richmond.

A man who ingratiated himself within Richmond’s inner most political and social circles has been found to have committed fraud by the B.C. Securities Commission (BCSC).

Entrepreneur and businessman Paul Oei is found to have illegally procured money from Chinese investors — while simultaneously offering them help to obtain Canadian citizenship under federal immigrant investor programs — to spend on himself.

The investment money, totalling just over $5 million, flowed through trust accounts of Steveston-Richmond East MP Joe Peschisolido’s law firm, which is now being sued by some of the prospective investor-class immigrants in various civil suits before the Supreme Court of B.C.

There are numerous photos of Oei, and his wife and business partner Loretta Lai, on the Internet that show him appearing to live a well-connected, lavish lifestyle.

Oei not only appears to have had friendly relations with Peschisolido and Prime Minister Justin Trudeau, he has donated money to the BC Liberals and a number of Richmond city councillors and Mayor Malcolm Brodie.

The BCSC notes that beginning in 2009, Oei solicited investments for two start-up recycling companies (which were to operate a recycling plant in the Fraser Valley): Cascade Renewable Carbon Corp. and Cascade Renewable Organic Fertilizer Corp. (known collectively as Cascade), through an indirect investment structure.

Canadian Manu acquired securities from Cascade and then sold them to investors. In most cases, the BCSC said the investors’ money went into the companies’ trust accounts. The money was then dispersed into six bank accounts of Canadian Manu and Oei.

In its decision, the BCSC panel stated: "The respondents (Oei and his companies) misappropriated these funds and used them for their own purposes and not as the investors were told they would be used."

The BCSC describes, in its Dec. 12 judgement, how Oei operated outside of the law:

The civil lawsuits claim Peschisolido, as a lawyer, is responsible for the lost investments because funds meant to be transferred from his firm’s legal trust to recycling plant investments went to Oei’s personal use instead.

A claim from a plaintiff named Bao Xi Yang alleges: “The scheme of Oei and Lai and acting through Canadian Manu Immigration and Cascade was fraudulent, and would not have succeeded but for the assistance they received from” Peschisolido and Co., which happens to specialize in corporate, commercial, real estate, and immigration law.

BCSC noted Oei had discussions with Cascade’s president “about the ability of Chinese investors to use the investment in the Cascade projects under government-approved immigrant investor programs.”

Peschisolido did not respond to questions from the Richmond News. In the past he’s noted to media that the BCSC fraud hearings are separate from the civil suits.

The BCSC findings describe how Oei lured in his biggest investor, who was a witness in the hearing.

Oei eventually bankrupted one of the companies.

According to BCSC Oei used his many political connections to paint a picture of a sound investment.

“Oei told (Investor C) that [Cascade] was developing an environmental project that was to turn waste into fertilizer and that the project had strong government support.”

According to Elections BC, Lai, Oei’s wife, donated $1,250 to the 2014 campaign for Brodie, who is chair of Metro Vancouver’s Zero Waste Committee and a strong supporter of organic recycling.

Oei is also one of the biggest supporters of Richmond First councillors Bill McNulty, Linda McPhail and Derek Dang, having donated $3,000 to their 2014 campaign.

Elections BC also notes Oei contributed close to $55,000 to the BC Liberals since 2011.

Oei has until Feb. 2 to respond to the BCSC findings and pending sanctions. The BCSC does not process criminal charges.

With files from Vancouver Sun