The city currently requires 10 per cent of new developments to be designated for market rental units
Jan 30, 2021 5:00 PM By: Kirsten Clarke 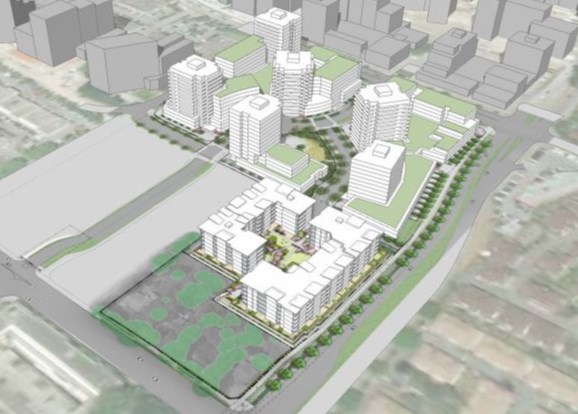 Conceptual design for the Polygon development in Richmond's Capstan Village area. The developer as put foward a rezoning application to the City of Richmond, which is on the agenda for next week's planning committee meeting.Polygon/Richmond Planning Committee agenda

A Richmond advocacy group would like to see 65 per cent of a proposed large residential development in Capstan Village turned into rental housing.

When the rezoning application for the Polygon development at Garden City and Cambie roads – which will have nearly 1,300 residential units when complete – first came to council for a public hearing last fall, council asked that more rental housing units be added.

But that’s not nearly enough rental housing for Richmond’s city centre, according to John Roston, co-ordinator of the Richmond Rental Housing Advocacy group.

“Whereas our need is huge for market rental units, it’s miniscule for condos for sale to investors. So this really is the problem.”

Roston pointed out that, when combined with the 200 market rental units approved for the Richmond Centre development, there’s only 320 new market rental homes coming to the city centre area. In comparison, the two developments will result in a combined 2,864 condos for sale.

Currently, the city requires 10 per cent of units in new developments be designated for market rental.

But Roston said he would like to see the city zone 65 per cent of the project for market rental, along with 10 per cent for affordable or below market rental, and cap the total amount of condos for sale at 25 per cent.

He argued increasing the rental stock, and placing those units under the care of a central management company, would help lower rent prices and ease the burden on, for example, young families, rather than having individuals rent out their condos as they wait for land values to increase.

It’s a scenario that’s directly comparable with what happened with Richmond’s farmland – before council put in size limits for homes in the Agricultural Land Reserve, mega-mansions drove up the price of farmland, said Roston.

“With farmland, they (council) finally bit the bullet and they said it’s the right thing to do for future generations…And that’s what we want them to do here.”