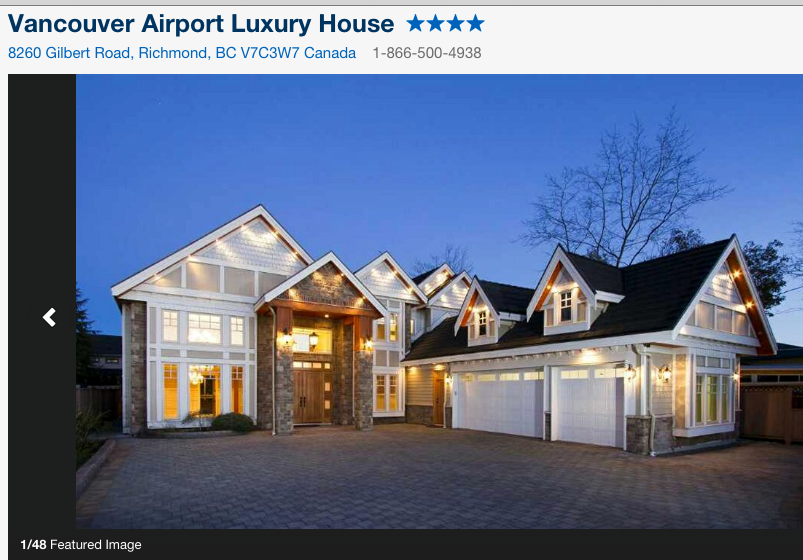 This house in a residential zone in Richmond is one of many advertised as a hotel online. June, 2015.

An apparently illegal house hotel investigated by the Richmond News nearly two years ago, has gone on to earn more than $90,000 in the past 12 months, according to AirDNA, a market analytics firm that publishes booking data on Airbnb.ca listings.

In fact, the house at 8260 Gilbert Road, advertised online as Newly Furnished Luxury Home, is considered one of the top-earning short-term rental properties in Canada.

The fact it has continued to operate in an apparently illegal manner, despite three inspections by city officials, is, in part, why the city is looking to  strengthen existing bylaws surrounding such operations.

“Newly Furnished Luxury Home,” as its billed online, was first brought to the attention of city officials in July, 2015. Since then, inspectors visited the home on July 7, 2015, Nov. 3, 2015 and March 3, 2017, according to city spokesperson, Ted Townsend. However, each time, inspectors determined the house was being rented to one person/family.

Townsend said online advertisements to the contrary are not proof of violation.

“We need real evidence of violations.” However, he did note that these inspections were conducted under the existing bylaw and that the new bylaws may result in different findings.

The City of Richmond has added four temporary inspectors and is proposing to increase fines for infractions.

“My expectation is we’re actually going to shut down these operations.”

The News attempted to book Newly Furnished Luxury Home, but operator Sylvia Li said it only books four or more rooms at one time. She did not reply to further queries. It’s unclear if Li lives in the home.

Present bylaws do allow for limited short-term rentals in the form of “boarding and lodging” as a secondary use for compensation, however, the property must be a permanent residence to someone, and bylaws limit these temporary rentals to just two guests.

The city is also proposing new bylaws to limit legally-licensed bed and breakfasts with a 500-metre buffer. It is maintaining its “boarding and lodging” rules as is (meaning anyone without a B&B licence can only host up to two guests).

Johnston said he’d like to see a more robust license system for anyone listing on Airbnb (including those who fall under the boarding and lodging category), not just a B&B operator.

The News has learned of a crackdown on the 19 legally-licensed bed and breakfasts in the city.

Stone Hedge B&B operator Brian Cooper said a number of bed and breakfasts have been handed cease and desist orders. He himself has until May 31 to fix a bylaw violation (building code) that was spotted. Others have been ordered to remediate a deficiency or shut down as well.

Cooper said with the new buffer, licenses will be limited. Therefore, he plans to keep his licence and make the $10,000-plus fix to his home.

Some residents and councillors have raised three major issues with entire homes being rented out as hotels: One, they can lead to nuisance complaints; two, a lack of regulations can pose health and safety risks; and, three, the city and region are mired in an affordable housing crisis with rental vacancy rates below one per cent in Richmond.