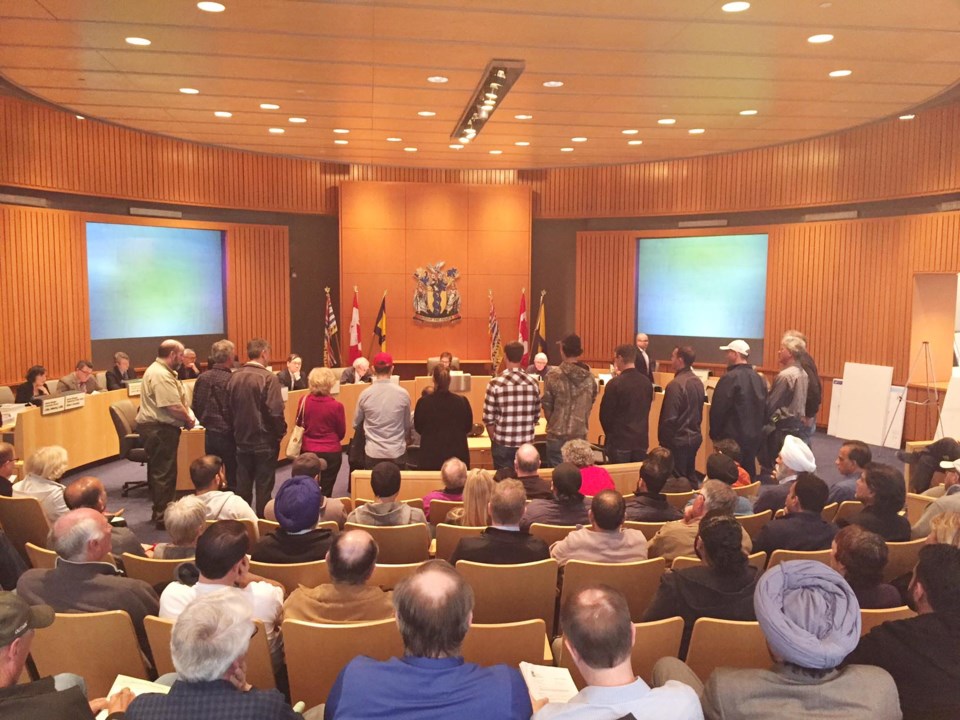 If it was a boxing match, a split decision would likely have been the call after another four hours of intense debate over the size of houses on Richmond’s farmland.

The bell sounded at around 11 p.m. Monday night, bringing to a close round two of the fight between farmers/landowners and residents/food security advocates.

About nine and a half hours of verbal punches have already been traded on the issue, with the third and final round — in the shape of a May 15 public hearing — drawing the marathon bout to a close.

After Monday night’s full city council meeting, nothing much had changed from the culmination of last week’s planning committee, which had to be moved to council chambers to accommodate a swarm of concerned farmers, most of whom were angry over city staff’s proposal to limit house sizes to 5,382-square-feet.

The majority of council is still set on the “compromise” of house size limits to be double the staff recommendation of 1,000-square-metres (10,764-square-feet), if the land it’s being built on is at least half an acre in size.

Anything less than half an acre would be subject to the original recommendation of 500 square metres (5,382 square feet).

Couns. Harold Steves and Carol Day were still the only two opposed to the increased sizes — both wanted smaller footprints on the farmland.

However, there were a couple of changes to what was decided last week, with Coun. Ken Johnston successfully tabling an amendment to increase the maximum setback distances from the road from 60 metres to 75 and Coun. Alexa Loo achieving the same, in terms of having septic fields removed from the “home plate” (combined area of main and secondary residence) definition.

More details were also provided by city staff as to the criteria for rezoning, should a farmer or landowner want to build beyond the proposed 1,000-square-metre limit.

The city’s planning manager, Terry Crowe, said cultural and intergenerational reasons would be taken into consideration for a bigger house size, although a need to accommodate more workers — coupled with an acceptable farm plan — would need to be demonstrated.

The majority of the public who spoke Monday night against the increased house size limits pointed to the need to protect precious Agricultural Land Reserve (ALR) farmland from “further erosion,” while imploring council to adhere to the provincial Ministry of Agriculture guidelines on the sizes, as per the original city staff proposal of 500-square-metres.

Meanwhile, most of the farmers and landowners continued their message that they “shouldn’t be punished” because of rogue developers seeking to build mega mansions on farmland.

While a few of them told council that it shouldn’t be “splitting hairs” over house size limits and the main focus should be on the landowners who are not farming the land properly.

Coun. Steves — who suggested earlier in the evening for farmhouses to increase vertically, rather than sprawl out — said he was against the 1,000-square-foot proposal because it would price potential farmers out of the market.

“In Richmond, we’re jumping the gun above the (neighbouring cities) and this will put pressure on them to increase their sizes.”

Steves further suggested that it was “a crime” to allow people to build massive homes on farmland, who then hire someone to harvest some blueberries on the same land.

Steves and Coun. Day were both opposed to increasing the setbacks on the farmland amid concerns over further “incursions” onto the ALR. They were accompanied by Coun. Chak Au and Mayor Malcolm Brodie, although the remaining majority voted in favour to increase the setback to 75 metres.

While voicing her disapproval of the increased limits, Day said the bylaw in question would “destroy some of the best back land in Canada.”

An attempted amendment by Coun. Loo to relieve the farmers of having to rezone — if they wanted a house size beyond the proposed limit — was defeated by the rest of council.

Day’s motion to send the entire matter back to city staff for further consideration was only supported by Steves.

In January, when council began a public consultation process on restricting home sizes on farmland, Couns. Day and Steves called for a moratorium, fearing a rush of development.

Since then, there has, indeed, been a deluge, with the average size of application at almost 13,000-square-feet; one proponent asked for 32,660-square-feet. A moratorium is now in place.

Until now, Richmond was one of the few Metro Vancouver municipalities not to have any kind of effective restriction.