Emergency physician hopes to encourage Richmond residents who may be wary about the vaccine
Mar 28, 2021 2:00 PM By: Kirsten Clarke 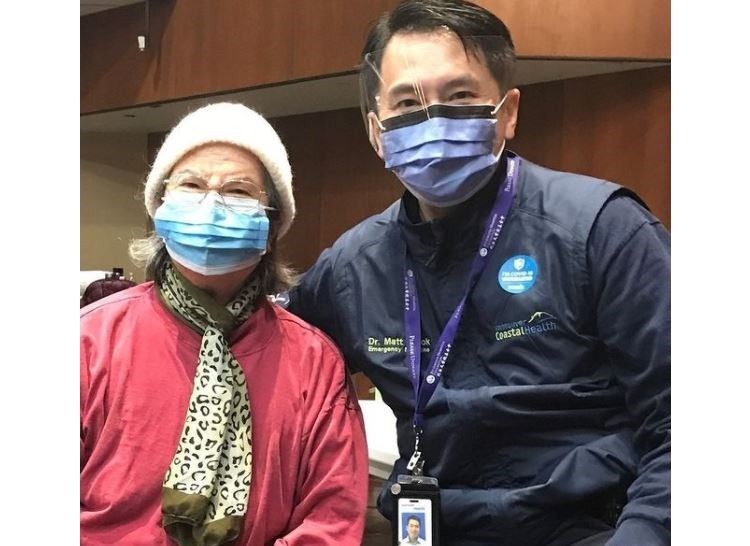 It’s been several long months since Dr. Matthew Kwok has been physically near his mother – but last week he was not only able to sit next to her, but also vaccinate her against COVID-19 at the same time.

“We’ve seen each other from outside, and through phone calls, but not in the same room, so that was the first time I was able to interact with her physically in some sense. And the first day I did that, I gave her a shot,” said Kwok, an emergency physician at Richmond Hospital, who also lives in the city.

Kwok administered the first dose of the COVID-19 vaccine to his mother, Olive, as well as to several other seniors, on March 16, the opening day of the River Rock Casino clinic.

“Vaccinating my mom was very meaningful and wonderful, but so was vaccinating everyone else. The mood was just ecstatic,” Kwok said.

Since the pandemic, Kwok’s mother hasn’t been able to go out into her community – her church has been closed for more than a year and family dinners have been off the table.

“I think that’s a very similar story for many people in the Richmond community. They’re looking forward to having physical contact with people (once health restrictions are lifted), and also in terms of having simple things…that we’ve been missing throughout the whole entire pandemic.”

For more than a year, Kwok has been working on the front lines of the pandemic response, and he has seen a number of patients admitted into the intensive care unit and put on ventilators. He’s also seen how the pandemic has impacted patients’ mental health, with no visitations allowed at the hospital.

But now, he said, there’s “a lot of hope” for the future.

Doctor hopes to encourage those wary about vaccine

Kwok, however, said he’s concerned that “Richmond still has a large proportion of people that have reservations about the safety of the vaccine.” He hopes that by showing he places enough trust in the vaccine to administer it to his own mother, others will be encouraged to get the jab.

“I think we can do better in Richmond, in terms of having more people embrace the vaccine,” he said.

He added that his mom “had absolutely no side effects.”

All of the vaccines available in Canada are safe and effective, said Dr. Meena Dawar, Richmond’s medical health officer with Vancouver Coastal Health.

She said there’s “really solid data” on protection from even one dose of the vaccine, for example, from the BC Centre for Disease Control which found a “tremendous decline in illness” in elderly seniors and health-care workers under 65 years of age.

“For most vaccines, we know that protection is better when two doses are spaced further apart than when they’re closer together,” said Dawar.

She added there are still spots available in Richmond for seniors to get the vaccine.

Currently, those aged 73 (born in 1948) and older who live in Richmond, or Indigenous peoples aged 55 years (born in 1966) and older, can call to book an appointment.