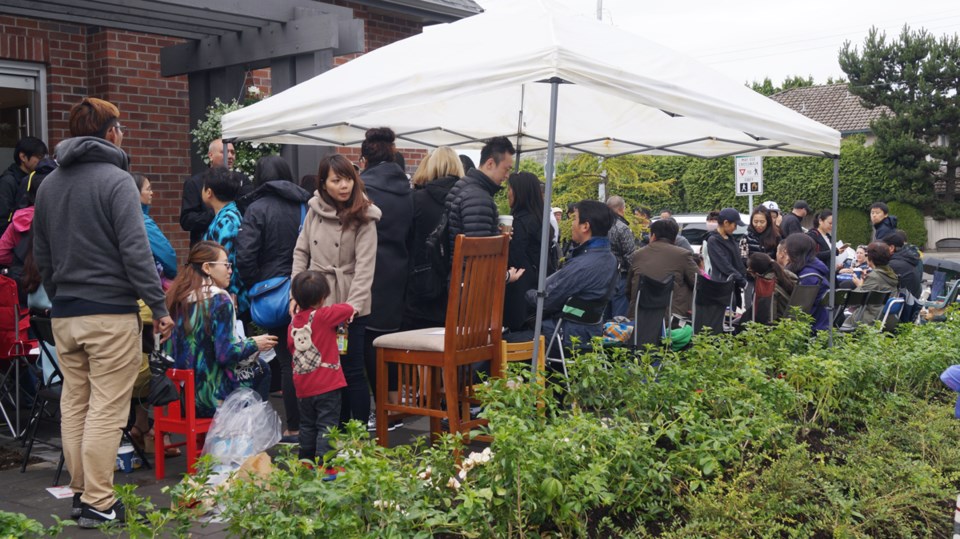 Many in the lineup for townhomes at Kingsley Estates were tight-lipped about how they heard sales would be happening on Saturday.Graeme Wood

Another apparent impromptu lineup formed late last week at Kingsley Estates — a new townhouse development at the former Steveston High site on No. 2 Road — leaving developer Polygon Homes with no other choice but to begin selling more units on Saturday, according to the company’s president and CEO Neil Chrystal.

“Once you have people starting to line up, you can’t have them wait to line up and not buy anything,” said Chrystal.

The lineup began last Thursday afternoon and by Friday had twisted around the corner, on to the sidewalk. Saturday had been earmarked as an open house preview, after Polygon had sold 30 homes the week prior after the first lineup formed, sparking anger and frustration in the community.

Many prospective homeowners in Friday’s lineup were tight-lipped when the Richmond News asked how they had heard about the sale of homes.

“I don’t want to say anything,” said a young man in his mid-20s, when asked basic questions about how and why he was in line.

One middle-age couple from Aldergrove said they heard from a realtor that “something may be happening” on Saturday. They brought lawn chairs and slept in their car Friday night.

The man said the couple had savings and wasn’t too concerned about the $1.4 million price tag for a four-bedroom, 1,700-square-foot townhouse.

Four young people played Mahjong, a Chinese board game similar to rummy. A young man at the table, in his early 20s, said he was waiting in line for a friend.

According to nearby resident Mario Raposo, who had initially been interested in a unit, the lineup formed before Polygon publically announced another sale would begin.

He described the process as “an utter gong show.”

Raposo said “the right thing to have done” would have been to leave Saturday as a preview date, as Polygon’s initial email had stated and then “announce the future sales date where everyone on the priority list has a chance at the homes (or a chance to be one of the first ones in line).”

Chrystal said Polygon isn’t used to lineups and “this is not the normal way of doing business.”

He said Polygon “adjusted our plans on the fly” and he didn’t know why people began lining up the second time. Chrystal suggested that realtors had speculated to those in the lineup that sales could commence.

Polygon ended up selling 29 homes, after having already sold 30 the week prior. That’s just about half of the 121 homes sold prior to any scheduled sale date, which members of the public had signed up via email to receive notifications.