Richmond city council voted unanimously to declare an emergency on Thursday evening, giving the city the ability to use any power it has to combat the spread of the coronavirus (COVID-19).
Mar 19, 2020 7:16 PM By: Richmond News 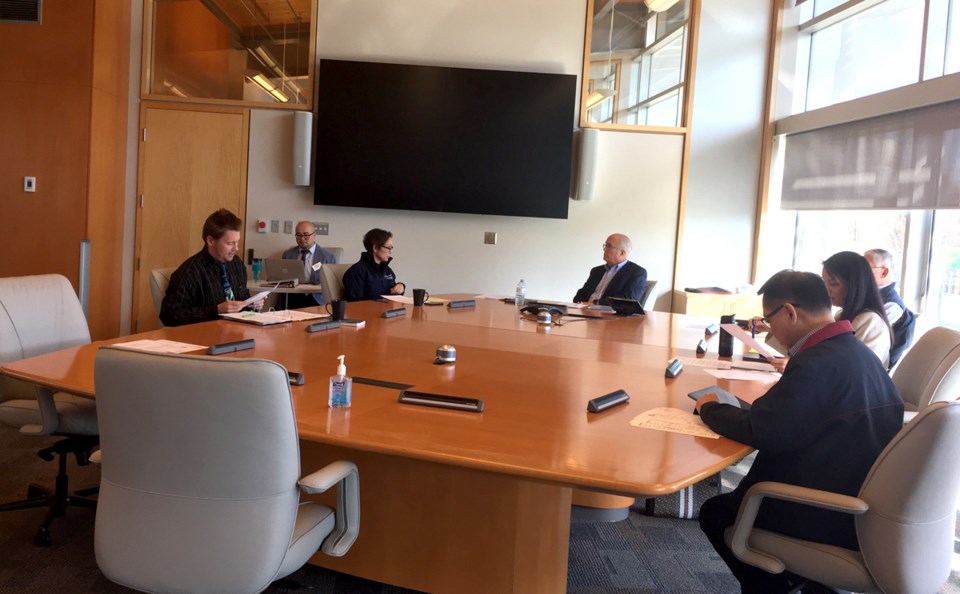 Richmond council declared an emergency - chairs were spaced out for social distancing and two councillors attended via teleconference.Maria Rantanen

Richmond city council voted unanimously to declare an emergency on Thursday evening, giving the city the ability to use any power it has to combat the spread of the coronavirus (COVID-19).

This was followed by Richmond Mayor Malcolm Brodie authorizing city hall to shut down for 30 days as of Monday. He said he hoped it could reopen sooner, but he said he expected the pandemic to continue longer than a month.

“We basically have no choice but to do this – we’re at war with the virus,” said Coun. Bill McNulty at the meeting.

The emergency declaration is open-ended, but it will be reviewed in 30 days by council.

It allows staff the ability to make arrangements to work from home, and core and critical services to continue online and by phone.

At the meeting, Serena Lusk, general manager of community services, confirmed that Richmond’s medical health officer, Dr. Meena Dewar, had updated her on the local coronavirus situation, saying there were eight lab-confirmed cases. All were mild and recovering.

The Anderson Room where the meeting was taking place was set up with sparse seating, with chairs set wide apart. Two councillors, Kelly Greene and Harold Steves, were connected by teleconferencing.

The declaration allows the city to be proactive to ensure the public and staff don’t infect each other, and to allow staff to work from home with a minimum number at city hall, explained city CAO George Duncan, also speaking via teleconference.

“It’s simply an opportunity to best position the municipality to react as quickly as a municipality can for issues that are very specific to the city of Richmond,” explained the city’s lawyer Anthony Capuccinello Iraci. This might be issues the city is aware of but the province isn’t and therefore they could act more quickly, he added.

The declaration “captures the entire spectrum of what a municipality can do,” he said.

The city is also shutting down the second week of spring break camps as well as any preschool programs in city facilities.

City council and committee meetings will continue as scheduled, despite city hall being shut down.